I'm sure readers are aware of the notorious Cresta Run, the purpose-built skeleton racing toboggan track at St. Moritz in Switzerland. 2012 is the 125th year that it's been built and raced, at a cost (so far) of four dead and countless hundreds (if not thousands) injured to a greater or lesser extent. 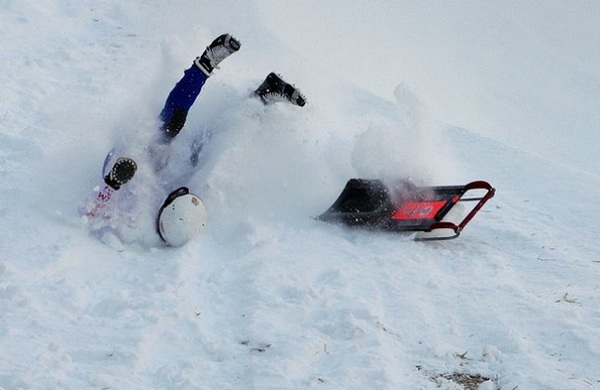 The Cresta is an ice run, three quarters of a mile long, that winds its way from above the 'Leaning Tower' in St Moritz down a steep gully through ten testing corners, past the tiny hamlet of Cresta, to the village of Celerina. The total drop is 514 ft and the gradient varies from 1 in 2.8 to 1 in 8.7.

The first Run was completed in January 1885 and took nearly nine weeks to build. Only the three upper banks received detailed work . The Cresta Run is still built from scratch every year using the natural contours of the valley and earth banks to provide a framework on which to pile the snow. The Run from Junction is built first, the upper banks second. 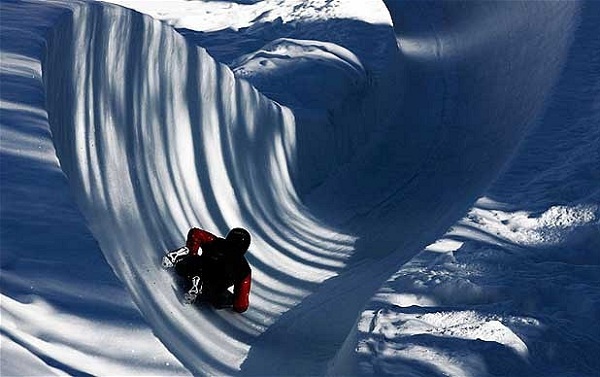 The Cresta usually opens two or three days before Christmas and continues for nine weeks until the end of February. There are over thirty highly competitive races and riding takes place every morning of the week. It is a private club, but non-Members are welcome to come and ride.

The Cresta has two starting points: Top and Junction. The current record from Top is 50.09 seconds, held by James Sunley. This means an average speed of over 53 m.p.h. ending at Finish at a speed close to 80 m.p.h. Riders from Junction begin opposite the Clubhouse, about one-third down the Run from Top. The current record from Junction, held by Johannes Badrutt, is 41.02 seconds.

There's more at the link. Here's what it looks like from the tobogganist's point of view.

As part of the celebrations of the 125th anniversary, the SMTB organized a special ladies race (special in that women have been officially banned from racing there since 1929). Lisa Grainger took up the challenge for the Telegraph. She reports:

As my name heads closer to the top of the list on the official board above the Run, I feel utterly sick. My heart is thundering so hard I can feel the blood pumping in my eyeballs. My hands are sweating beneath my metal knuckle-guards. And I keep having to take my helmet off because my rapid breathing is steaming my visor up. A voice in my head keeps saying: "It's not too late to chicken out".

Then my name is called: "Lisa Grainger to the box" and, almost in a trance, I'm helped down on to the track, where I lie down on my toboggan and quietly survey the ice below my nose. A few last-minute tips are given by my "guru" George Bingham, and then the bell rings – a single loud "ding" – and I'm off to the shouts of "Rake, rake, for god's sake rake!" as I hurtle downhill, feeling totally out of control, white walls flying past me, at me, in front of me, as I smash into hard, compacted edges, soar up ice walls, try and steer left and right, and finally, as promised, seeing a long, straightish white stretch in front, press my body as far forward on the toboggan as I can get it, for what I know will be my final burst of speed at the finishing line. Almost as soon as it's begun, it's over. 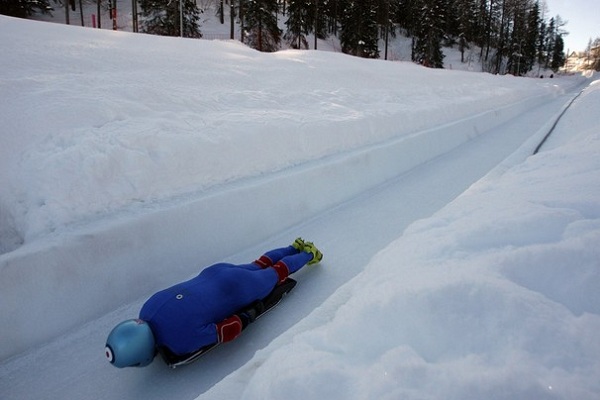 What did I feel like? Like a leaf being hurtled through rapids, I felt totally out of control, yet aware of every sight and sensation: the raking and scraping sounds, the dark bends and curves, and the terrifying G-Force around Shuttlecock, as the toboggan was sucked up onto ice walls and then whisked back down. And afterwards, I have never felt elation like it; I could actually feel the adrenalin coursing through every capillary in my body, as I let out a great hissing "Yessssssssss! I did it!", before my respectable time of 73.25 seconds was announced and I felt kisses of congratulations from all around.

The dangers of the course are very real, particularly the notorious 'Shuttlecock Corner', where many riders have come to grief. Here's a video clip of many of the crashes on the Cresta Run during the 2009/10 season, including many at Shuttlecock Corner (which is unmistakeable - look for the piles of hay laid on the snow to slow riders being catapulted off the course!).

Let's leave the final word to the late Marilyn Monroe, who famously telegraphed the Shuttlecock Club (membership of which is restricted to those who've wiped out at Shuttlecock Corner) as follows: 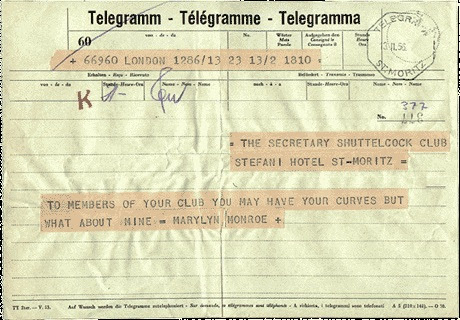 Labels: Accidents, Boys and their toys, Contests, Danger, Sport, The Mind Boggles
Email ThisBlogThis!Share to TwitterShare to FacebookShare to Pinterest

If this run were in the United States it would be completely illegal to ban women. On the other hand, given our insane liability laws, only people with years and years of experience would be allowed anywhere near it.

Now that motor racing is legal in Switzerland again, they should pair the skeleton track with a hill-climb, prizes going to best combined time per class.

Congratulations. I have selected you for the Liebster blogging award. I have not clue if your readership is below 200. I don't care, you're one of the more obscure blogs I follow so here's the link. Do with it as you please.

Feel free to have fun with it.