The US Navy's Office of Naval Research has just announced the successful testing of the first prototype electromagnetic railgun. Here's an excerpt from ONR's press release.

The firing at Naval Surface Warfare Center Dahlgren Division (NSWCDD) kicks off a two-month-long test series by the Office of Naval Research (ONR) to evaluate the first of two industry-built launchers. The tests will bring the Navy closer to a new naval gun system capable of extended ranges against surface, air and ground targets.

“We are starting our full-energy tests to evaluate the barrel life and structural integrity of the prototype system,” said Roger Ellis, program manager of the EM Railgun, part of ONR’s Naval Air Warfare and Weapons Department. “It’s the next step toward a future tactical system.”

The EM Railgun launcher is a long-range weapon that fires projectiles using electricity instead of chemical propellants. Magnetic fields created by high electrical currents accelerate a sliding metal conductor, or armature, between two rails to launch projectiles at 4,500 mph to 5,600 mph.

The 32-megajoule prototype demonstrator, built by BAE Systems, arrived at NSWCDD on Jan. 30. 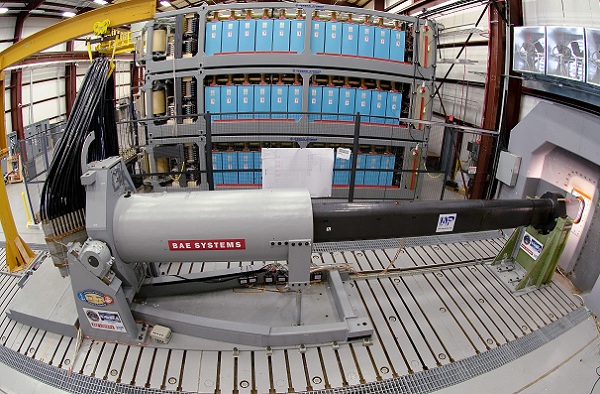 One megajoule of energy is equivalent to a 1-ton car being thrust at 100 mph. The prototype — which now looks more like a naval weapon compared to previous lab-style launchers — is the first of two industry-built launchers to be delivered to the Navy. General Atomics is building the second launcher, scheduled for delivery in April. ONR previously relied upon laboratory-built systems to advance the technology.

When fully developed, the EM Railgun will give Sailors a dramatically increased multimission capability. Its increased velocity and extended range over traditional shipboard weapons will allow them to conduct precise, long-range naval surface fire support for land strikes; ship self-defense against cruise and ballistic missiles; and surface warfare to deter enemy vessels. The Navy’s near-term goal is a 20- to 32-megajoule weapon that shoots a distance of 50 to 100 nautical miles. 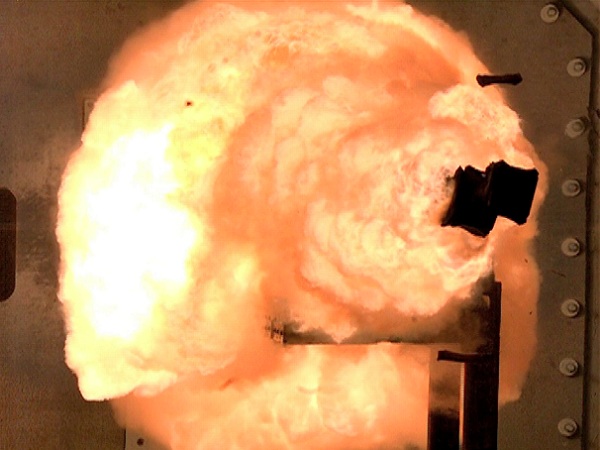 To achieve this, the Navy is moving ahead with the EM Railgun program’s next phase: to develop thermal management systems for both the launcher and pulsed power to facilitate increased firing rates of up to 10 rounds per minute. Toward this end, BAE and General Atomics have been contracted to begin concept design of a next-generation thermally managed launcher.

There's more at the link. Pictures are courtesy of ONR, as is the video clip below.

I'd call that pretty impressive! It's the first time I've seen a railgun prototype that's reasonably close to something one might see aboard a ship. The next question, of course, is the electrical generation capacity ships will require to power the darn thing! I suspect that only a nuclear-powered ship will be able to provide enough electricity to sustain prolonged rapid fire. I guess all that's on the drawing board, too.

The basic failure here is the GUN.
A device that projects a mass.
Wow!. Welcome to the Chinese invention of gunpowder, and all it's uses!.
This is beyond laughable.
The self-serving images beggar description.
There two types of idiocy.
Genetic.
Deliberate.
I see no genetic Idiocy demonstrated here.

Stuart, I fail to see what upsets you about the development of a more advanced, longer-ranged 'gun'. There will always be a need for bombardment of shore targets, warning shots across the bows, and strikes against low-value targets that don't justify expending a high-cost guided weapon against it. For all those purposes, the gun remains a very useful solution.

Sure, to take out an enemy high-value warship, a guided weapon (or, in the future, an energy weapon such as a laser beam) is likely to be more accurate, and hence more successful: but that doesn't mean you don't need to tackle other targets as well.

I think his issue was all about the very existence of guns, not this extremely impressive technology. Why he came to your blog to spew about it, I have no clue.

I think you're right about only nuclear-powered ships being able to power such weapons, at least at high rates of fire. I can envision banks of capacitors being used, and/or a second reactor just to power the weapons systems. Given all the space savings they'll have by not having to carry the "gunpowder", they'll have plenty of space, provided they don't use it all up in stocking up on extra ammo!

Poetry: a piss-poor substitute for substantive arguments and logic.

It would be interesting to see what kind of electrical generation is required for this, but like you, I expect this may mean a return to nuclear powered escort vessels. At the extreme speed these projectiles would have, there's no need for explosives, so there's no ship's magazine to explode from battle damage.

It's also cheaper than tossing Tomahawks against land targets- there's no reason we can't basically rig up a projectile with a JDAM-like package for over the horizon artillery support. If some Marines storming a beach get pinned down by a bunker, one reports the location of the bunker back to the ship, and next thing you know, the bunker is basically vaporized by that destroyer hanging 10 miles off the coast.

I would also wonder how a lightweight projectile (say, a 25 pound dart) would work against a ballistic inbound- if it will toss a 1 ton weight at anything approaching 3200mph, it might well be able to toss much lighter weights at closer to escape velocity. At least theoretically. If it can do that, well, forget the whole missile based defense and put a few railguns around to deal with things.

32MJ every 6 seconds converts to 5.3 MW or about 7,000HP. That is doable with a medium sized gas turbine in an auxiliary space for existing ships.

The new Zumwalt-class destroyers are gas turbine-powered electric drive with 78 MW of generating capacity, so they should be able to push 10 shots/minute from multiple launchers without slowing down! No nuclear power required..

Richard is indeed correct about the power requirements and what it would take. My old nuclear cruiser would have been able to replace the 5" guns with these railguns and support the power requirements without any additional equipment needed.
That said, these will put much more strain on the hull of a ship, and it would need to be reinforced accordingly. The British experimented with heavy cannon on light ships before WWI, it did not work well at all.

It's interesting you comment on the power requirements. I don't work on that program, but I can tell you that last year at least one firing knocked out the power for most of the base. They seem to have worked some of those kinks out, though.