The bhut jolokia pepper, officially certified as the hottest in the world since 2007, has just been dethroned. Gizmodo reports:

The Habanero pepper has a maximum hotness of 350,000 Scoville Heat Units. That's nothing—like eating an Altoid—compared to the mouth-searing Trinidad Moruga Scorpion. It tops out at over two million SHU and has just been named the world's hottest pepper. 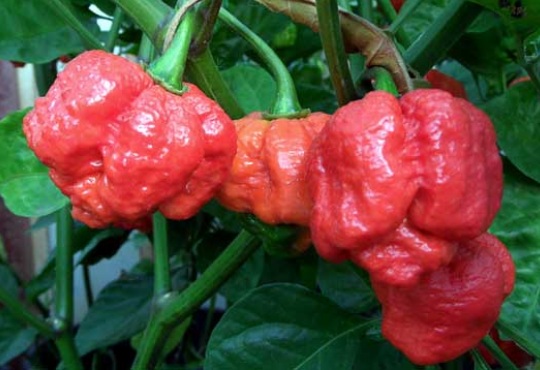 ... researchers from New Mexico State University's Chile Pepper Institute ... planted 125 plants of the hottest known varieties—the Trinidad Moruga Scorpion, the Trinidad Scorpion, the 7-pot, the Chocolate 7-pot and the previous world record holder, the Bhut Jolokia. Once ripe, several peppers from each type were harvested, dried and ground to a powder. From that powder, the team extracted capsaicinoids (the compounds that give peppers their heat) and rated them. The Trinidad Moruga Scorpion averaged 1.2 million SHU with some individual fruits measuring a face-melting two million-plus SHU.

There's more at the link. In addition, here's an interesting article speculating that the Trinidad Moruga Scorpion may be 'a 7 pot/scorpion hybrid'. The author seems to be well up on the technicalities of chilis, to coin a phrase.

I note that you can already buy seeds for the Trinidad Moruga Scorpion pepper on Amazon.com. The seller claims:

These are [the] same seeds that got the recent 2,000,000 Scoville Record. How do I know? They used my seeds for the research!

He or she doesn't offer any evidence to confirm that, but if so, their seeds should sell like (very) hot cakes! I won't be among their customers, though. I start wincing in anticipation when the Scoville unit count reaches even five figures, let alone seven! I'll stick to a dash of Tabasco or Cholula hot sauce on my food now and again . . .

Labels: Boys and their toys, Danger, Food and Drink, The Mind Boggles, Weird
Email ThisBlogThis!Share to TwitterShare to FacebookShare to Pinterest

Pass. I prefer to let the lining of my mouth stay attached.