Today in history: a step closer to the atomic bomb raids


On February 19th, 1945, US Marines stormed ashore on the volcanic island of Iwo Jima in the Pacific Ocean. 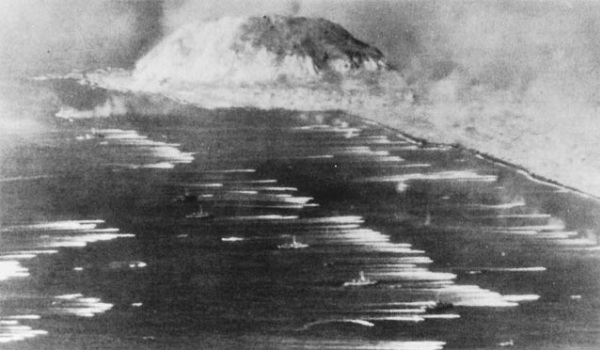 The struggle was titanic, and for the first time in the Pacific war the Marines suffered more casualties than the Japanese (26,031 killed, wounded and captured versus 22,060, although over 99% of the Japanese casualties were killed compared to less than 27% of US casualties). 27 Medals of Honor were awarded, 13 of them posthumously - more than a quarter of all MoH awards to Marines during the Pacific War. 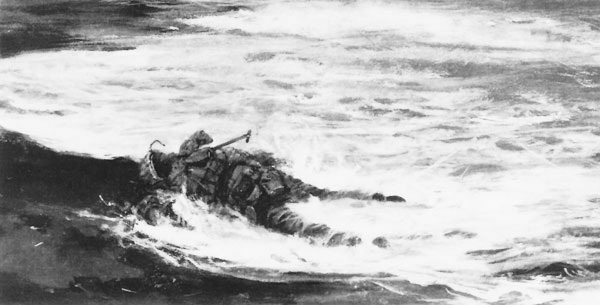 Two world-famous and time-honored quotations have come down to us from the battle for Iwo Jima. The first was delivered by the then-Secretary of the Navy, James Forrestal, who witnessed the raising of the US flag on Mount Suribachi. Turning to Marine Lieutenant-General Holland Smith, he observed: "Holland, the raising of that flag on Suribachi means a Marine Corps for the next five hundred years." The second was by Fleet Admiral Chester Nimitz, who said after the battle: "Among the Americans serving on Iwo Island, uncommon valor was a common virtue."

What very few Americans knew at the time (and certainly none of the landing force knew) was that the seizure of Iwo Jima was an integral part of preparations for the atomic bombing of Japan. The island had no real strategic value in terms of a future amphibious invasion of Japan, but was a vital element of the air war, for several reasons. Some of them were downplayed by later historians, but at the time all seemed vitally important reasons to invade Iwo Jima. 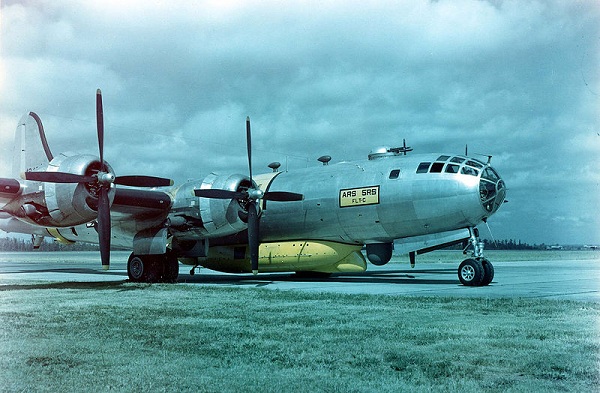 Many B-29's were damaged over Japan, or ran short of fuel, rendering them incapable of completing the 1,500-mile return flight to the Marianas. Iwo Jima was half that distance from Japan, making it much easier for damaged or fuel-constrained aircraft to reach it. The first such B-29, nicknamed by its crew 'Dina Might', landed on Iwo Jima's incomplete dirt runway on March 4th, 1945, even before the island was finally secured. Here's an account of the incident.

After the famous flag-raising on Feb. 23, 1945, perhaps the most memorable image from Iwo Jima was the first B-29 emergency landing on the island.

One reason for capturing Iwo was to provide an emergency landing strip for B-29 Superfortress bombers flying to or from Japan.

Less than a month after the Marines’ Feb. 19 invasion of the island, the first B-29 landing was highly symbolic. Returning from a mission over Tokyo on March 4, 1st Lt. Raymond Malo landed “Dinah Might” at Iwo’s Motoyama Airfield No. 1. Fighting still raged — Marines held half the airfield, the Japanese the other. Malo landed on the Japanese side but stopped on the U.S. half. 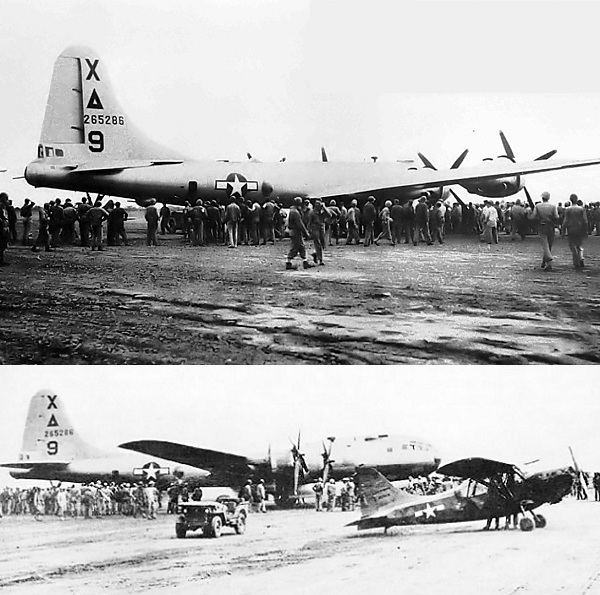 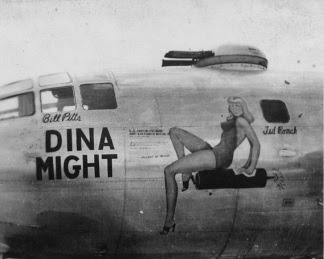 The plane was repaired and took off the same day. It returned to Iwo on April 12 heavily damaged and was eventually abandoned. But the March 4 landing boosted troop morale.

For Field Musician Charles Adams of the 5th Marine Division, it “was quite an experience.” During the landing, his unit was fighting along the west side of the airfield.

The landing emphasized the differences between aerial and ground combat. A battalion commander, Maj. Shelton Scales of the 4th Marine Division, watched the plane appear from the south and circle Mount Suribachi so closely that he thought it would crash.

In photographs, the Dinah Might dwarfs onlookers. When Scales went to examine her, he thought the plane was “the size of [a] monster.” The infantry world is small; infantrymen focus only on the ground they occupy. For aviators, the battleground is the sky.

The landing, as well as the ability to make other landings on the island, contrasted attitudes about Iwo.

Infantrymen cursed its ground because they faced the possibility of death there.

Aviators, who faced danger during takeoffs in planes loaded with bombs and fuel, flights to and from Japan, mechanical problems and landings in damaged aircraft, were relieved to be there; for them, the island represented safety.

There's more at the link. Bold print is my emphasis. (I have to add - with nose art like that, it's no wonder the plane's arrival boosted Marine morale!)

A total of 2,251 B-29 landings would be made on the island by the end of the war, the large majority of them by damaged aircraft. This helped to save the lives of over 20,000 aircrew. I don't know whether the US Army Air Forces ever formally thanked the Marine Corps for its sacrifice in taking Iwo Jima, but such thanks were surely owed by those aircrew survivors to the men who bled and died to take the island.

On this anniversary of the landings on Iwo Jima, we'd all do well to remember that, and thank those who fought there so that others who might have died would live, and so that our fathers and mothers might remain free.

God Bless, Peter. I've known a number of Marines who were there in February '45 and a few B-29 crewmen who were glad to have the emergency landing strip available.
Your friend from the List - Lucky

After Forrestal made that remark and moved out of earshot, Gen. Smith is reported to have said (prophetically!)"When the war is over and money is short, they will be after the Marines again, and a dozen Iwo Jimas would make no difference." He was proved right only months after VJ Day.

Another reason for Iwo Jima’s strategic importance: it was a base for the P51 Mustang fighters to escort the B29’s. The Mustangs, with a much shorter range than the bombers, could just reach the Japanese home islands from Iwo.

The Japanese on Iwo knew this and made the fighter pilots a high priority target.

On the night of 26 March 1945, ten days after organized resistance on the island ended, over 200 Japanese officers and soldiers came out of their tunnel system, infiltrated the Marine lines, and made their way to the bivouac area of the fighter pilots and their ground support troops. Armed with swords, grenades, and firearms, they killed about 15 pilots before they were taken out by the Marines.

Two weeks later, on 7 April, the Mustangs flew their first raids against the Japanese home islands, escorting more than 300 B29’s which targeted aircraft factories in Tokyo and Nagoya. This was the greatest raid against Japan to date and the first one involving land-based fighters.

Every fighter pilot who survived the Japanese assassination attempt and participated in the 7 April mission was decorated. My father was one of them. I still have his original navigation chart from this mission.

PS Here’s a documentary on the B29 missions: http://www.archive.org/details/TheLastBomb1945