The Secretary of Energy puts his foot in it


I note with a certain amount of schadenfreude that US Secretary of Energy Stephen Chu put his foot in his mouth in no uncertain terms today.

Chu admitted to a House committee that the administration is not interested in lowering gas prices.

Chu, along with the Obama administration, regards the spike in gas prices as a feature rather than a bug. High gas prices provide an incentive for alternate energy technology, a priority for the White House, and a decrease in reliance on oil for energy.

The consequences of the policy are not likely to be of benefit to the Obama administration. The Republican National Committee has already issued a video highlighting the spike in gas prices and the failure of the administration to address the issue.

Add into the mix green energy fiascos like Solyndra, and Chu might well have kindled a full blown scandal.

I should darn well hope the Administration's opponents will take advantage of such a slip! We're all suffering under high gasoline prices at present; so to have a senior Administration official tell us that they're OK with this, and it's in line with their policies, is enough to make everyone's blood boil!

I note, too, that oil and gasoline prices have risen steadily since this Administration took office, a little over three years ago. 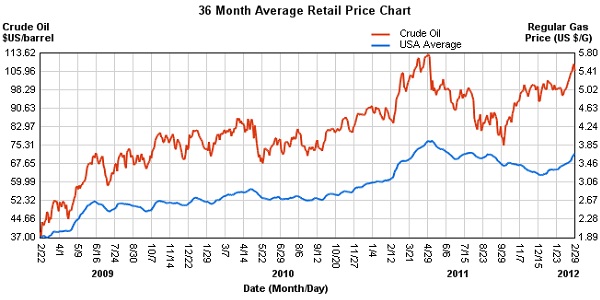 Of course, much of the increase has been caused by the fall in the value of the US dollar, thanks to the Fed's 'quantitative easing' programs: but those programs were made necessary in part by the massive borrowing needed to sustain the Administration's financially ruinous rates of expenditure. In the end, it all comes back to President Obama's policies, and those of his party. I rather suspect they'll have to pay a price for that come November - at least, I hope so!

(That hope has nothing to do with the fact that it's a Democratic Party administration, either. Any Administration this feckless and incompetent should suffer for it, irrespective of their party!)

I'd like to comment, but all I can say is thank you for covering the issue, and encourage you to keep doing so. Other than that... what is there to say? The facts speak for themselves.

Not to ascribe any altruistic motives to any of the government critters, but from a purely practical point of view, there are benefits to high gas prices. Necessity is the mother of invention, and if demand, supply or economic realities make oil and its by products too expensive to use, then people will indeed come up with better alternatives. This is a net win for all of us, and government policies that artificially deflate the price of oil should be viewed with just as much suspicion as any that would artificially raise the prices.

It is better that we should begin to feel the need to investigate alternative engeries now, rather than have a government which seeks to maintain a price ceiling which inevitably will fail and plunge us into deeper hardships than we would have otherwise faced. We have seen the effects of the government meddling in the signaling power of the markets before, and it has rarely if ever been a good thing in the long run.

Again, I don't ascribe altruism to these statements, but at least we can applaud them for not sticking their noses where it doesn't belong.

Chu is quoted as saying that we need to get gas prices up to European levels (abt $10/gal, right?). Obama wanted to make coal so expensive that no one would use it - which would shut down much of US electric power generation. There is much, much more.

Lower energy prices were never a priority of this group, and that should be obvious to anyone who even tries to scratch the surface.

Chu is just another bit actor in this heart-wrenching murder mystery and his role is to distract everyone from the real plot running behind the scene.
You can't leave Wall Street and the banksters out of this equation. The speculators drive the price of oil up and benefit handsomely at the expense of the working man who's struggling to keep food on the table and fuel in the tank. The government and the media work hand in hand with these money changers, trying to blame the increased hostilities in the Middle East for the increase in oil prices. Okaaay...? I guess that means there's not as much oil coming out of the region because Obama and his sanctions and/or military won't let it out? U.S. presence couldn't possibly be some of the cause of said 'hostilities' could it? Who is REALLY benefiting from this?
Isn't fuel one of the first indicators of inflation? Inflation is actually the decline in value of the currency - a direct result of printing more money or Quantitative Easing and who is responsible for that?
The octopus has his tentacles in EVERYTHING and he's itching for war. Why? Who's to gain and who's to pay (even more)?

On 2/14 Peter had a post, The background to the Keystone XL Pipeline debacle, with a link to Casey Daily Dispatch. I had read it and when I heard Bill O'Reilly question some hapless individual last week about the rising gas prices, he continually cut off this gentleman, leaving me to believe that he had been nowhere near this article. Bill O. continues his rhetoric about oil companies selling "our" oil to overseas markets. Yes, they do.
However, it might be a good idea to backtrack in time and reread the post and Casey article. It might not explain the entire role of oil companies to our govt's future plans for America, but at least you can appreciate the bigger picture.
My husband had to have surgery. Our round trip to the hospital and dr. is 70 miles. We have had to make six round trips within the last 10 days. Today, the gas is at $4.25. We are expected to return Monday. :)

Granted but if you go back 4 years the picture painted looks a bit different. Almost like big oil trying to influence politics.