US government spending and the deficit - how will it end?


I've written extensively about this subject in the past, so I see no need to repeat the same old, same old yet again. Briefly, I believe there are only three possible outcomes to excessive spending by the US government and the ever-increasing debt incurred to sustain it. At least one of the following results is, in my opinion, inevitable and inescapable; a combination of more than one is possible.

I believe option 3 above is the most likely short-term outcome, because it's the only one that appears to offer a way for politicians to - at least theoretically - escape responsibility for their past mistakes and malfeasance. John Mauldin, an analyst whose opinions I respect, inclines more towards option 2. In his latest weekly newsletter (link is to an Adobe Acrobat document in .PDF format), he writes:

My friend David Walker was the Comptroller General of the United States and head of the Government Accountability Office (GAO) from 1998 to 2008. He now tours the country talking about the need for fiscal responsibility. He heads a group called Comeback America.

David points out that if you simply eliminated all the “tax expenditures” (tax deductions), taxes would go up $1.3 trillion a year. If you combined that with serious entitlement reform, a much lower tax rate (the lows 20s as the top rate), and did $3 in spending cuts for every $1 in tax increases, you could balance the budget for the foreseeable future. His website lists numerous tax and budget proposals, besides his own. He points out the necessity (and I wholeheartedly agree) to have bipartisan cooperation to avoid a fiscal disaster. He demonstrates that we have $75 trillion in unfunded liabilities in Medicare, Social Security, and pensions.

There are ways to get serious entitlement reform. The very conservative Congressman Paul Ryan and the quite liberal Senator Ron Wyden have combined to come up with a plan for reforming Medicare that goes a long way toward what is needed. And it has upset a lot of people serving in Congress with them. But such compromise and cooperation is precisely what must happen if we are to avoid a true crisis. Whether you agree with every small detail in their proposal, you should applaud their willingness to seek bipartisan solutions.

I get rather strong letters from my conservative friends chiding me for not “keeping the faith.” What we need, I am told, is smaller government and less spending. But when I press them as to whether the path we are on will result in crisis, they almost always agree that if nothing is done we will see a severe crisis. So my next question is, do they think we should hold the philosophical line, or allow the country to fall into economic chaos?

I have spent much of my life holding that line. But my analysis is that without a deficit solution we will enter another depression that will take years to come out of. And waiting until one party or the other has total control of Congress and the White House is not the answer. We are getting to the Endgame. Time is running out. We have a few precious years to set the ship of state back on a better course. I would rather keep the ship from sinking than argue about what should be on the menu at dinner. We can worry about that when the leaks in the boat are fixed.

And for those who asked, I still think we will do the right thing. Cutting spending will have consequences. We should do it slowly (over 4-5 years), and that will mean a Muddle Through Economy with more risks of recession. I talk of dire consequences only if we fail to fix the deficit. I think the former outcome is more likely. If you don’t share my optimism, then you should plan for a depression. And if we get to the end of 2013 and it is clear that no compromise is forthcoming, I will probably get much more concerned. Maybe even become downright gloomy. Just saying.

As for option 1, we're already seeing major international purchasers of US government bonds changing their behavior. Zero Hedge reports that China and Russia, formerly major buyers, have not only stopped buying them, but are actually reducing their holdings, as shown in the graphs below. (Open each chart in a new tab or window for a larger view.) 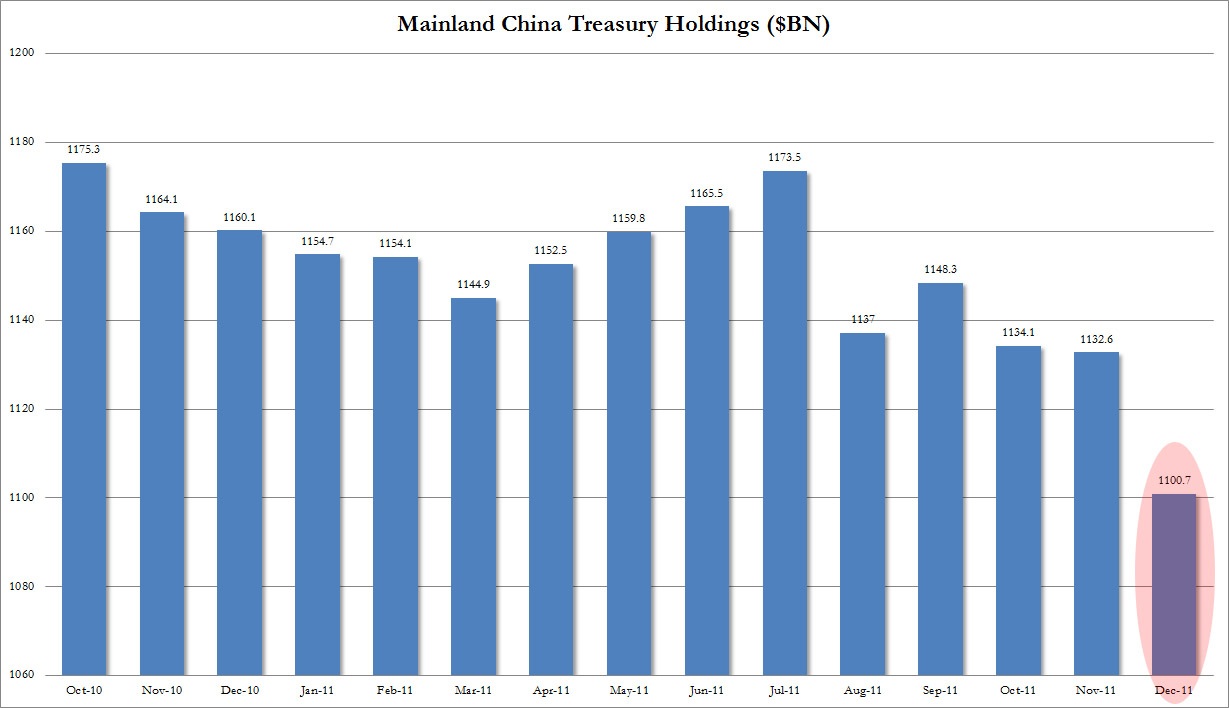 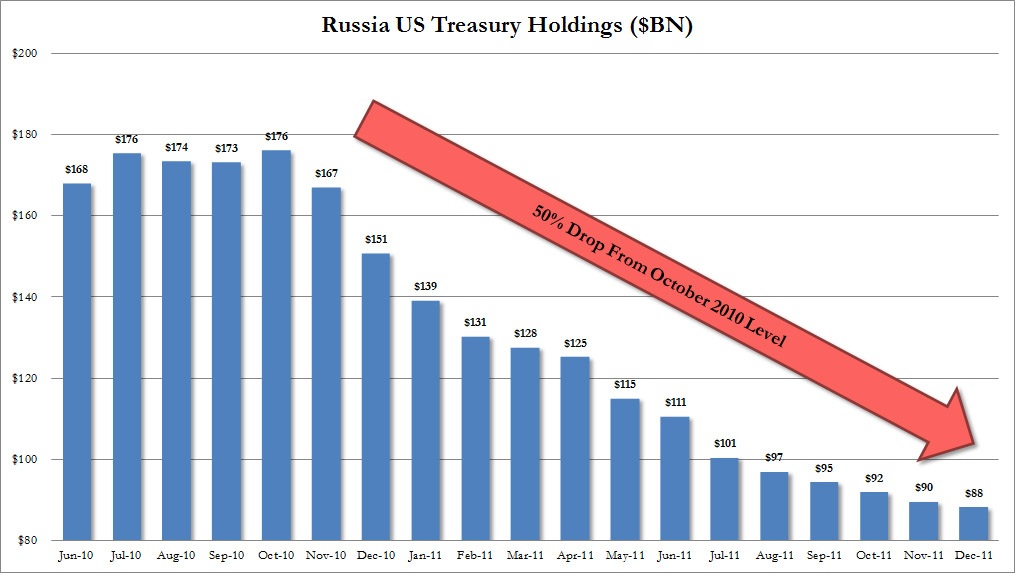 To compensate for the loss of this investment income, the Federal Reserve has drastically increased its purchases of US government securities over the past year. Of course, it's had to print money to do this - it's certainly not drawn money out of a national savings account for the purpose! In so many words, it's buying bonds with 'play money' - money having no intrinsic value whatsoever, existing only as a string of binary ones and zeroes on a computer screen. It's not even printing the banknotes any more. The whole charade is nothing more or less than a gigantic financial 'shell game', with no pea under any of the shells. 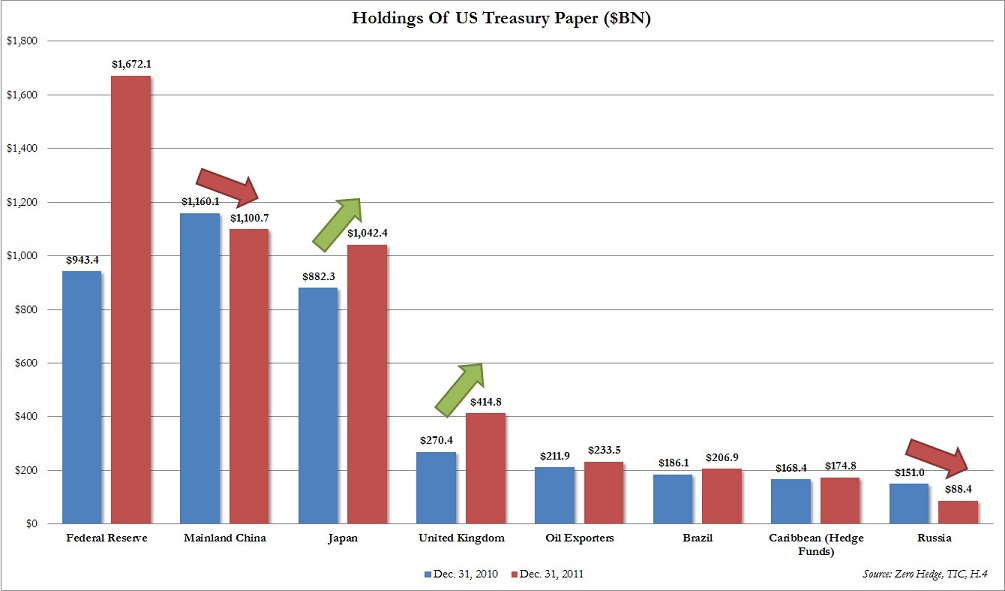 Something else to note in the graph above: two of the most indebted nations on earth, Britain and Japan, are buying more and more US treasury bonds. Three highly indebted economies are shuffling each other's debt around on a global financial table. What could possibly go wrong?

As I said earlier, my money's on the third of the possible outcomes I listed as the most likely short-term result of the present crisis. However, there's enough evidence out there, as outlined above, for options one and two to be possible as well - or a combination of any two, or even all three possible outcomes. I guess we're going to find out the hard way Real Soon Now.

I'm afraid that I can't be as sanguine about this as David Walker. I don't see how this doesn't end without blood in the streets and pain like our nation has never seen. This is too long to get into here, but tell me where you see a large national cry to cut spending and benefits? For every one of us who says we know we've been lied to and that money we've been promised won't be there, I see hundreds saying "that's my money I paid in taxes!" and are ready to riot.

Just telling the Free Sh*t Army that their benefits are going to be frozen, let alone cut, and they scream like you put their legs in a wood chipper.

No politicians have the guts to do what's necessary. Look how well the "Super Committee" worked.

I just can't see how this ends well.

I totally agree with Graybeard. There are too many people who have put "all in" are now entirely dependent upon SS and Medicare/Medicaid plus any life savings that they may have happened to actually save. They were lied to decades ago and told that SS would be there for them, and in some cases actually encouraged not to bother saving, since they could rely on SS to be there.

Then there were those of us who knew that SS would never be there for us, and have planned to either work until we are dead, or made alternate plans with what little money we could save.

Either way, it comes screeching to a halt. It has to. The free lunch (on someone else's dime) has to run out and when it does, blood will be shed. I just don't see how that can be avoided, as much as I wish it were so. The only question is whose blood gets shed, and how much.

I agree with Greybeard and Shrimp. "How will it end?" Badly.