The Secret Archives open their doors, just a little


The Vatican's Secret Archives have existed in approximately their present form since 1611, when Pope Paul V ordered that the existing, fragmentary archives be gathered together at the Novum Archivum in the Apostolic Palace in Rome. In 1630 Pope Urban VIII established the Secret Archives as an independent organization, separating it from the Apostolic Library. Since then, apart from Napoleon's theft of the Secret Archives in 1810 and their final return in 1817, the Archives have remained in what is today the Vatican. 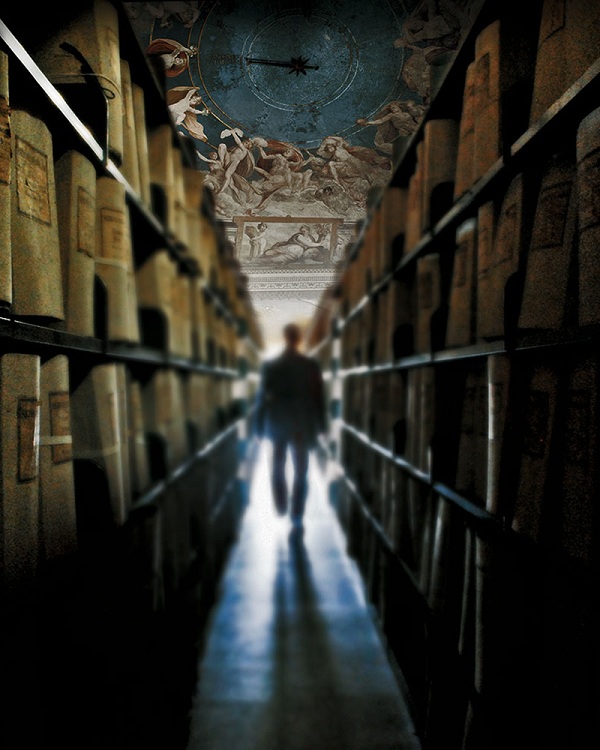 New regulations concerning their operation were promulgated by Pope Leo XIII in 1884, and Pope John Paul II inaugurated a new fireproof subterranean bunker (shown below) in 1980 to house the Archive's most valuable records. The Archives' Web site describes it as follows:

It is a fire-proof, two-storey reinforced concrete structure with a storage capacity of 31,000 cubic metres [almost 1.1 million cubic feet]. Its fixed and revolving shelving system runs 43,000 linear kilometres [26,719 miles] and is designed to optimize high density, rational storage and efficiency. New technology monitors security, climate and humidity and the bunker is also provided with a HVAC system, an emergency lighting system and a paging system. 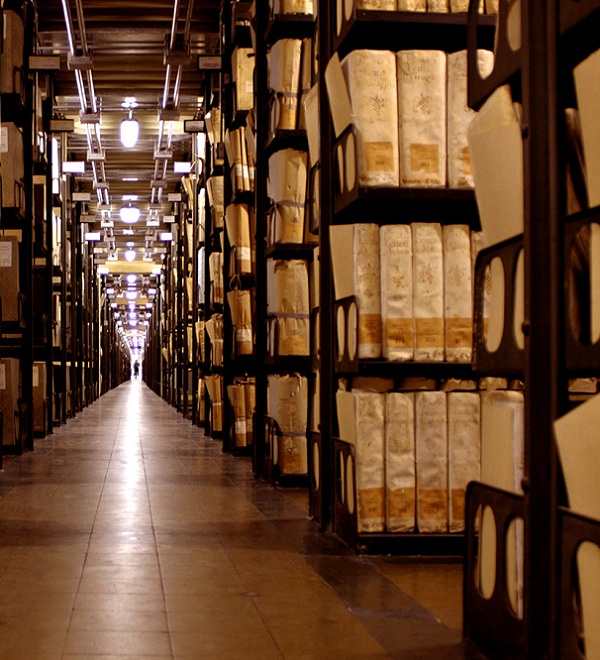 Ironically, the term 'secret' in the title of the Archives doesn't mean what most speakers of English assume it means. Rather, it derives from archaic usage, denoting that the contents of the Archives are the personal property of the current Pope as head of the Catholic Church. Their 'ownership' passes from one Pope to the next in line of descent. In that sense, they are 'secreted' (an old way of saying 'segregated') from the common property of the Church, and assigned instead to the personal custody and ownership of the Supreme Pontiff.

Be that as it may, they contain some of the oldest and most valuable documents in history. For example, there are 81 parchment documents with solid gold seals, which are kept in a specially secure, air-conditioned environment to better preserve them. Also in this section are the proceedings of the trial of Galileo Galilei; the 'Privilegium Ottonianum' dated 962, clarifying the relationship between the Church and the Holy Roman Empire, handwritten in gold script on a purple parchment; and the Liber Diurnus Romanorum Pontificum, the oldest formulary of the Papal Chancery, dating from the 8th century.

Today an unprecedent exhibition of 100 of the most important documents from the Secret Archives, titled 'Lux In Arcana' (literally 'Light On The Arcane'), opened in Rome. It'll remain on display until September this year. The Sydney Morning Herald reports:

CONTAINING more than 80 kilometres of shelves packed with an unknown number of papal documents spanning 12 centuries, including correspondence with Genghis Khan's grandson, Wolfgang Mozart and Adolf Hitler, the Vatican's secret archive opened to the public for the first time yesterday, putting on show 100 documents in Rome.

Usually the preserve of select scholars, the archive boasts such treasures as a letter, bearing 81 wax seals, sent by British nobles to Pope Clement VII in 1530 demanding King Henry VIII be allowed to divorce Catherine of Aragon, a request the Pope refused, helping prompt the formation of the Church of England.

The letter, lost on the shelves until 1920, takes pride of place alongside an 1887 letter from a North American Indian chief, written on a strip of bark, addressing the Pope as the ''Grand Master of Prayers'', and Galileo Galilei's shaky signature on his retraction in 1633 of his heliocentric views after the Vatican put him on trial for heresy.

From 1493 there is the papal bull that split the new world between Spain and Portugal after Columbus's return from the Americas.

There's more at the link. Further information may be found at the exhibition's Web site, and at the Web site of the Secret Archives themselves. Here's a video preview of the exhibition.

I once had the opportunity to visit the Secret Archives. It's a strange place, very hushed and solemn - or at least, it was on the day that I was there. It's a very rare privilege to be granted access, and my visit (arranged by a friend and colleague who was working in the Vatican at the time) did not include the right to inspect any documents; but I'm glad to have had the opportunity to see the place for myself. I wish I could visit this exhibition, too.