Throughout Africa, poaching of big game is an ongoing and endemic problem (particularly of rhino for their horns, which are considered an aphrodisiac in the Far East and sell for - literally! - twice their weight in gold, and of elephant for their ivory tusks). South Africa didn't see as much of it in the past as many nations further north on the continent, thanks to some very rigorous policing. However, that meant that South Africa became almost the only nation on the continent with adequate stocks of big game - and that attracted the poachers, once they'd 'shot out' the game of other countries. Poaching has thus become a major problem in South Africa. According to SA National Parks, almost one rhinoceros per day has been poached this year.

A major part of the problem is that poachers are sneaking across the international border between Mozambique and South Africa to kill rhino in the Kruger National Park and neighboring areas, and saw off their horns. If they can get them back across the border, the relatively inefficient and corrupt law enforcement authorities in Mozambique are much less of an obstacle to smuggling the horns to the Far East.

However, hunting Africa's big game has hazards of its own, because sometimes said game doesn't feel like being hunted! A gang of three suspected poachers found that out the hard way a couple of days ago. A tip o' the hat to reader Glen W. for sending me the link to the story.

A suspected poacher was killed by a buffalo in the Kruger National Park, park authorities said on Wednesday.

"A person was killed by a buffalo just north of Punda Maria last night. Apparently there were three men and two of them ran away," spokesperson William Mabasa said.

Reports on Wednesday said the men were poachers, but Mabasa could not confirm this.

"But you could ask yourself, what would you want in the park at night without coming through the gate?"

Lieutant Colonel Mohale Ramatseba said the 35-year-old man was trampled and died at the scene.

I bet most South Africans - who appreciate the fact that tourists who come to view the big game of the continent bring money and jobs with them - will be cheering loudly for the buffalo! They're certainly bad-tempered animals where humans are concerned. I think Robert Ruark described them very well when he said that they "look at you as if you owe them money". 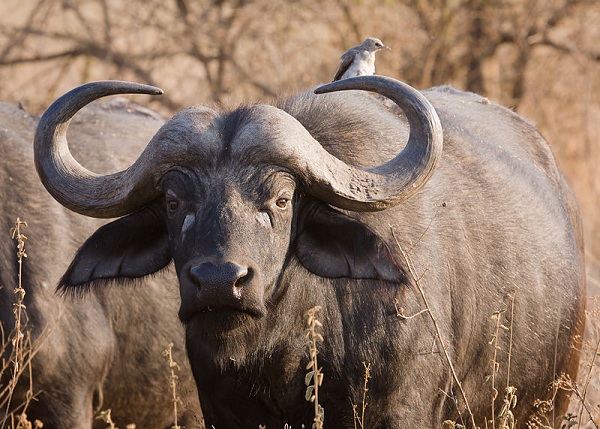 The news report above reminded me of others during the 1990's (see, for example, this one) to the effect that lions and leopards in the Kruger National Park were killing and eating illegal immigrants trying to sneak into South Africa from Mozambique. The general reaction among most of the population was to shrug and say, "Well, the lions have to eat, too!" Perhaps South Africa might wish to consider earning valuable foreign exchange by offering to 'export' some of its lions and leopards to the US-Mexican border region . . .

Score one for the good guys...er.... Buffaloes!

I seem to recall that Peter Capstick admitted to more fear of Cape Buffalo and Hippos than to lions and leopards. Herbivores can kill you just as dead as carnivores can, a lesson some folks apparently have to learn the hard way. Go buffalo!

Agree with Old NFO -- love it when the good "guys" win!

Let the country authorize deadly force and begin selling 'licenses' to tourists who have an interest in wildlife preservation. I think a lucrative sideline would be decoys, camouflage gear and guide services.

Just think of the money that little enterprise would bring in.

Yeah, Capstick said the problem with Cape Buff was they had no weak spots: fast, tough, excellent hearing, smell and vision. I think he once said they'd walk along like any cattle, until one decided he didn't like the way you parted your hair, or otherwise got annoyed, and then...