If you've been trying to lose weight by combining diet and exercise, without success, there's a new product in Britain that may help with both aspects. Metro reports:

Britons will now be able to tone up their muscles while they eat after a company released a bizarre new cutlery set attached to dumbbells. 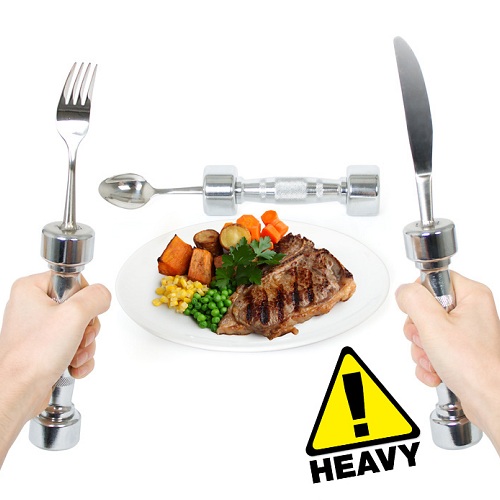 The hefty chrome knife and fork weigh one kilogram [2.2 pounds] each - the equivalent of a bag of sugar - while the spoon measures in at an extraordinary two kilograms [4.4 pounds], which is heavier than a complete 32-piece set of stainless steel cutlery.

The innovative products, called Eat Fit Cutlery, have been described as good for 'gluttons in need of a work out'. But you'll need to be willing to pay a costly £89.99 [about US $140] if you want to buy the set.

I can't help but think you'd be better off working out with that cutlery rather than eating with it! I've heard of indigestion pains (indeed, I've had 'em myself from time to time!), but the thought of sore arms and wrists at the same time is a bit daunting . . . and what if you drop one of them on your foot (or, even worse, your partner's foot)? It's heavy enough to hospitalize someone!

Labels: Boys and their toys, Business and Commerce, Food and Drink, Funny, Weird
Email ThisBlogThis!Share to TwitterShare to FacebookShare to Pinterest