We've spoken of three-dimensional printing on previous occasions. Now comes news of a potentially revolutionary application of this technology to the field of medicine.

The University of Hasselt (Belgium) announced today that Belgian and Dutch scientists have successfully replaced a lower jaw with a 3D printed model for a 83 year-old woman.

According to the researchers, it is the first custom-made implant in the world to replace an entire lower jaw.

The lower jaw of the elderly woman was badly infected and needed to be removed. Considering the age of the patient, a “classical” microsurgical reconstructive surgery takes too long time and can be risky. Therefore a tailor-made implant is the best choice. It took a few hours to print. 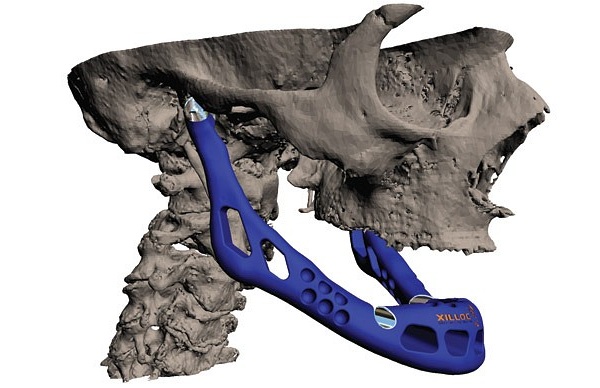 A titanium laser sintering 3D Printer was used to create the jaw.

The operation was performed in June last year in the hospital in Sittard-Geleen. One day later the lady could start talking and swallowing.

“Computer technology is causing a revolution in medical industry”, said professor Jules Poukens from BIOMED. “A traditional surgery takes up to 20 hours, and the patient should definitely stay 2 to 4 weeks in the hospital. But this operation lasted four hours and the woman could go home after four days.”

The possibilities opened up by this development are almost endless. In due course, it will probably be possible to replicate almost any bone structure in the human body, and replace the original bone with its artificial copy. Imagine what this could mean for a shattered leg or arm bone - no more wire, plates and pins, but instead a whole new bone! I've had spinal fusion surgery. Does this mean that someone suffering the same injury I did might now be able to get new vertebrae, and/or artificial discs between them, instead of having to have bone chips inserted to fuse the injured vertebrae together, with titanium reinforcing bars screwed into them above and below the injury site?

I'm going to say forget about it for your spine. It may replace bones, but it doesn't replace cartilege nor, and this is the important part: nerves(the spinal cord). Not to mention that the bone marrow is what produces your white blood cells.

Did you see the video from the company that printed it? No sound, but watch here