Flight Global reports on a rather strange-sounding accident in Syria.

Mystery still surrounds the circumstances of an apparent mid-air collision involving a Syrian Arab Airlines Airbus A320 that resulted in substantial damage to the twinjet's vertical fin.

The only verification of a collision came from a brief statement released by the ministry of information and carried by Syrian government media, which stated that a military helicopter - possibly a Mil Mi-17 or Mi-8 - had collided with the jet, which had returned to land at Damascus.

Unverified images of a Syrian Arab Airlines A320 in a hangar show damage to the fin and rudder consistent with at least two horizontal clockwise rotor blade strikes at a height of about 9.3m (30ft), ruling out a ground collision because the Mi-17's rotor height is too low. 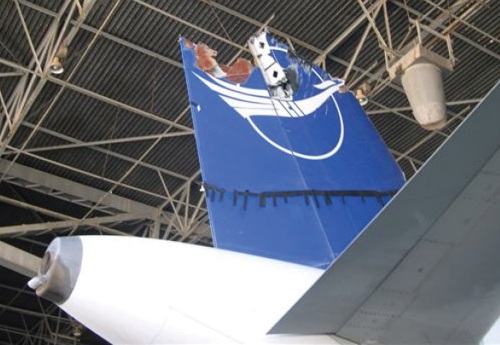 The lower half of the rudder remained attached. Lack of evident damage to the rest of the airframe, notably the horizontal stabiliser, might indicate that the helicopter passed aft of the A320.


There's more at the link, including more (and larger) photographs of the damaged airliner.

No word on what happened to the helicopter . . . but if its rotor blades caused that much damage to the tail of the Airbus, they'd most certainly have been destroyed by the impact - and they are the wings of the helicopter.  It would have plummeted to earth along with all of its occupants.  I doubt whether any of them would have survived.

Besides all that you discuss - how did the heklo remain stable in the jet wash in order to get close enough to make a rotor strike?

Things are just not adding up at all.

Various fragmentary reports suggest that this may have been a crossing collision while the airliner was somewhere in its landing approach and the chopper engaged in anti-rebel operations. This would resolve the disparity in the speed and altitude abilities of each aircraft.

Or it was an attack upon the A320, it see IF a helecopter could down another plane.
You notice that not ONE msm had this in the news anywhere duirng there time on the air which is 24 hours a day. Not in the papers, not on the radio, not in the news papers. I wonder why that would be?