A new book has been published about the British Churchill class nuclear attack submarine HMS Conqueror (shown below). 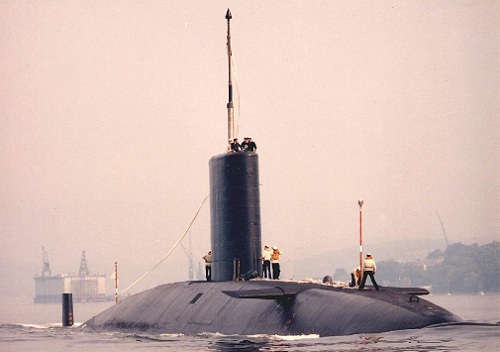 Not only was this ship responsible for sinking the Argentine cruiser ARA General Belgrano during the Falklands War, it seems it successfully 'robbed' the Soviet Union of some of its latest technology a few months later.  The Telegraph reports:

Throughout the 1950s and 1960s the Anglo-Americans rested on their laurels, confident of their superiority in naval technology over the fledgling Soviet fleet. But as the 1970s wore on that confidence was eroded. Soviet submarines were not just becoming quieter and faster, they were able to turn the tables on their supposedly more advanced Western opponents. Submariners call it “bouncing”, the practice of creeping up on a hostile submarine before switching on active, wave-emitting sonar. The deafening ping in the earphones of the target crew tells them: “I’m here. If this was a war, you’d be dead.”

Towed-array sonar is different. It is passive and does not emit a signal. It floats at a prescribed depth, trailing behind a ship or submarine, simply listening for enemy submarines. Because the hydrophones are spaced out, they can achieve a multi-dimensional fix on a target, and are less vulnerable to noise from the host vessel. The American and British navies imagined themselves to be far ahead in this technology and were disturbed to discover that the Russians were matching them.

Had they caught up through ingenuity, or by spying?

The issue was sensitive for the British, who had been plagued by spy scandals in the post-war period. The “Portland Spy Ring” had betrayed naval secrets, as had the Admiralty clerk John Vassall. The Americans took the lead, conceiving a project to capture a towed array and discover its origins. General Dynamics, supplier of kit to the CIA, built the pincer equipment, which was installed in British submarines. But why not use the bigger US Navy?

“There are two schools of thought about that,” says Prebble, a former editor of World in Action. “The British believed they were selected because they had more skilled submariners, and exercises do seem to bear this out. British submariners tend not to play by the book to the extent that the Americans do.

“The more cynical view has it that if a British sub was caught the diplomatic fall-out would be less severe than if an American one was involved. No one wanted to provoke a superpower confrontation.”

“When crews heard about these pincers, everybody thought it was absolutely crazy,” says Prebble. “Their use demanded the most brilliant seamanship, coming up from below into the array’s blind spot and edging towards the cutting point only a few yards from the tow ship. The pincers were designed to gnaw rather than slice cleanly to give the impression that the array had snagged on an underwater obstacle and been torn off.”

The trawler’s propeller was feet away from Conqueror’s hull. A momentary miscalculation and a collision was inevitable. But nerves held and a connection was made. The pincer blades gnawed, and in seconds that seemed like hours the array was freed. Clamps held on to the cable as Conqueror dropped away to a safe depth, trailing the array by her side.

“Everyone in the control room was tense,” says one of those present. “We were expecting at any time that we would be discovered and were ready to run, if necessary.”

None of the crewmen who spoke to Prebble was prepared to confirm Conqueror’s position but the suspicion is that the operation took place inside Soviet territorial waters, just three miles from the coast. If discovered, the sub would have faced attack from Russian air and naval units. Once Conqueror reached a safe distance, divers were sent out to secure the array. The submarine later surfaced so that they could swim out again to haul the device aboard and bundle it in the hull.

Did the crew of the AGI know what had happened? Even if they suspected foul play it would not have been in their interests to admit it to their superiors. A sojourn in the gulag might have followed.

Immediately after Conqueror reached her base on the Clyde, the array was put on to an aircraft and sent for analysis in the United States. It is said that the name Conqueror was whispered with a certain reverence in the Pentagon for some time afterwards.


There's much more at the link.  Here's a video clip of the author, Stuart Prebble, discussing some of HMS Conqueror's achievements (including the sonar 'theft') and his book, 'Secrets Of The Conqueror'.

OK, I guess that's another book to add to my 'Must Read' list!

In the same vein of Sub espionage I would recommend Blind Man's Bluff by Sherry Sontag and Chris Drew.
The Silent Service did amazing feats of espionage back in the day...

Big brass ones. I can imagine the mission briefing. "You want us to do what? OK, when do we leave?"

Now I just need to find a copy of Shinano! to complete my set.

Add the book Deep Black if you can find it too...

So WAS the tech found to be stolen? It was kind of the point to reading to the end ... to find out. Am I just blind and missed it?

@LSBeene: The article doesn't provide the answer to that question. I hope the book does!