We've already expressed concern over the latest unemployment figures.  Now Zero Hedge describes the data massaging that's been going on, including this graphic depiction of just how untrustworthy initial reports look after they've been corrected (which usually happens a few weeks after they've been issued).

The blue line shows the initial figures for weekly jobless claims this year, depicting an ongoing drop - which is healthy, right?  However, the red line shows those same figures after they're corrected.  Somehow, the mainstream media never highlight the corrections, do they?  Nor do they ask why initial reports are always positive and/or optimistic, whereas subsequent corrections always tell a very different story.  Can you say 'lying'?  I thought you could . . . 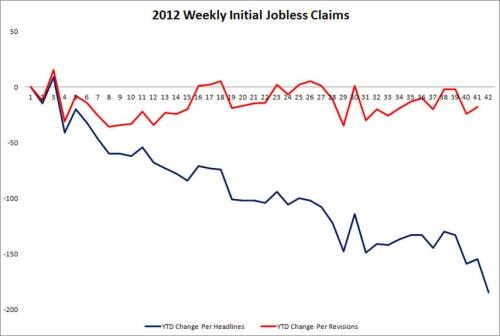 There's much more information at the link.

That graph speaks for itself, doesn't it?  Our government is lying to us from pillar to post.  As the election draws nearer, the administration is becoming desperate to hoodwink us just long enough to grab enough of our votes for a second term.

I strongly suggest disregarding all 'official figures' for the next few weeks.  I doubt very much whether any positive news will be either factual or believable.

Quick search through Google. Assuming you can get them to loan it to you through your public library or directly.
http://bibliotech.memphis.edu/search~S4/o2785490