To my great delight, I've found a (legal) online copy of Frederick Russell Burnham's classic book 'Scouting On Two Continents', published in 1926.  It's available from a Scouting Web site as an Adobe Acrobat document in .PDF format.  Click here to load it - and make sure to save a copy to your local hard drive! 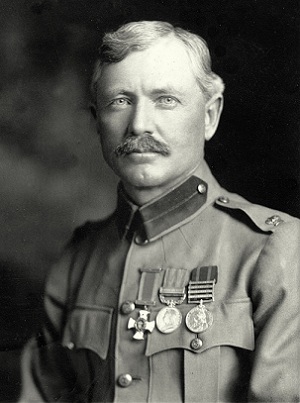 For the benefit of those who've never heard of Major Burnham, he was the quintessential adventurer of his time (or of any time, for that matter).  Think of any fictional hero you've ever read about, and Burnham outdid him.  For that matter, think of any recipient of the Medal of Honor or the Victoria Cross.  Burnham would undoubtedly have equalled or outdone them, too!  His career is one of the most remarkable testimonies to human courage, endurance and strength of spirit that it's possible to imagine.  I can't even begin to cover it all here, but his Wikipedia entry will give you more information.

Perhaps the most telling testimony about him is that, despite being a US citizen, he was commissioned as a Major in the British Army and served as Lord Roberts' Chief of Scouts during the Second Boer War.  So spectacular were his achievements that after the war, he was offered the award of the Victoria Cross, Britain's highest award for gallantry in action, if only he would accept British citizenship (the VC could not be awarded to foreigners).  He tactfully declined to give up his American citizenship, so he was awarded the Distinguished Service Order (DSO), Britain's second-highest award for gallantry in action (equivalent to the US Distinguished Service Cross) and the highest award for valor that could be made (at that time) to a foreign citizen.

Here's what some other great men of history had to say about him.

Major-General Sir Frederick Carrington (speaking of the Second Matabele War):  "Burnham is the finest scout who ever scouted in Africa. He was my Chief of Scouts in '96 in Matabeleland and he was the eyes and ears of my force."

President Theodore Roosevelt:  "I know Burnham. He is a scout and a hunter of courage and ability, a man totally without fear, a sure shot, and a fighter. He is the ideal scout, and when enlisted in the military service of any country he is bound to be of the greatest benefit."

Sir H. Rider Haggard:  "Burnham in real life is more interesting than any of my heroes of romance!"


Burnham taught Lord Baden-Powell much of what he was later to incorporate in the worldwide Scout movement.  The two remained lifelong friends, and Burnham's contribution to scouting was recognized in 1927 when the Boy Scouts of America made him an honorary member.  Burnham said of Baden-Powell in 1944:

Either innate nobility or Divine guidance gave that intrepid and gentle soldier the vision to turn the youth of the world to a new and better way of life. Baden-Powell's accomplishment was void of contentious dogmas and severe disciplines; it was without threats of dire punishment, neither did it demand obedience. By the simple observance of a few essential precepts the parched and purposeless lives of many youths were changed until they throve and blossomed, just as the dry earth responds to the gentle rain after a drought. Even after all these years of proven fact, it still seems amazing that so many millions of boys throughout the world owe their inspiration to the simple code that Baden-Powell upheld as the guiding star to the vast organization he created and named The Boy Scouts.


There's much more at the link, including an account of their shared adventures during more than one African war.  It'll be of great interest to all who are, or have been, Scouts.

Burnham was a cowboy, messenger, prospector, landowner, rancher, scout, Indian fighter, soldier . . . so many things it's almost impossible to name the full list.  He's one of the most multi-faceted and intriguing characters I've ever encountered in the pages of history.  If you have any spirit of adventure at all, you must - I repeat, must! - read his book.  It's that important.

(I'm still looking for an online copy - or an affordable paper copy - of his 1944 book, 'Taking Chances'.  If anyone knows where one may be found, please let me know!  If I get a paper copy I can afford, I'll gladly convert it into e-book format and make it available online, as to the best of my knowledge it's out of copyright by now.)

That such a man lived - let alone lived so long! - is still a source of astonished awe to me.

Saved per your instructions. Thank you!

They are great books! My father handed me both of Burnham's books and ordered "read and learn." I did. Ours are reprints by the Wolfe Publishing Company, Prescott, AZ, (C) 1994. Very nicely printed and bound hardcovers.

Affordable is a relative term.