The 2012 elections: call me cynical


I'm not buying the current media 'spin' that the Romney/Ryan camp's performance in the first two televised debates is driving a swing among voters to support them.  I've said earlier that I didn't believe the polls being published by the mainstream media, and regarded them as fatally flawed - even dishonest.  I suspect the media realized how far out on a limb they'd pushed themselves, and have been conducting more honest polls over the past few weeks - polls that more accurately reflect the opinions of the electorate.  They're merely using the debates as an excuse to more accurately account for the anti-Obama sentiment that's been there all along.  Witness the grassroots response to events such as the Chick-Fil-A brouhaha, the Wisconsin recall elections, and many others.  The groundswell of resistance is unmistakeable.  It's not a pro-Republican groundswell, either - it's anti-Obama.  People are simply sick and tired of him, and of those who espouse his agenda.

As I've said many times, I'm neither Democrat nor Republican.  I support the individual, not the party.  Nevertheless, I must acknowledge that President Obama has become his own worst enemy.  He's lied so often, about so many things, that he's no longer either believed by or believable to many in the electorate.  This cartoon by Michael Ramirez at Investors Business Daily sums it up very well. 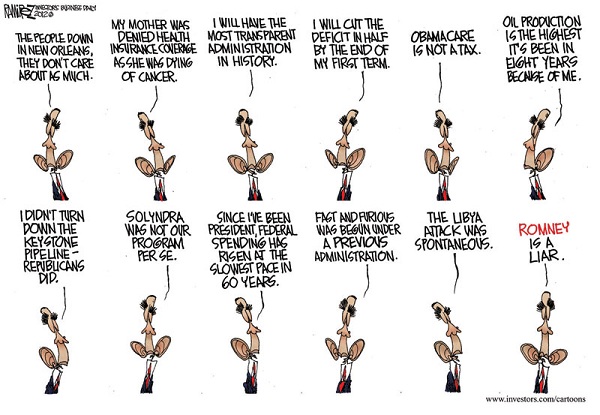 I'm not sure that Mitt Romney will necessarily be any better than Mr. Obama as a President . . . but I don't think he can possibly be worse!  I've already pointed out that whoever is elected is going to find himself hamstrung by our economic and fiscal woes.  Nevertheless, I'd rather have 'anybody but Obama' in the White House when that happens.

My personal idea is that the presidential election should be a two parter. Part one is a simple yea/nea if the incumbent should be eligible for reelection. Part two goes on as normal.

As for Romney v Obama, at least Mitt doesn't have the deep down hatred of America and all it stands for that Obama does.