Creepy - and slimy too!


I've never been a fan of slugs, ever since as a young child I ran barefoot into the garden and stepped on what felt like a nesting swarm of the darn things.  They squished and popped underfoot, leaving me feeling very yucky indeed!

You'll understand, therefore, that news of an invasion of giant slugs in England makes me less willing to visit the place - to put it mildly!  The Telegraph reports:

“Monster slugs” from the Iberian peninsula are swarming across Britain, fuelled by the rain, which has provided ideal conditions for the creatures to grow. Slug experts report a two-fold increase in giant Spanish slugs, which can grow up to 10 inches long, with some gardens swamped by 200 at a time. There have been reports of these slugs gnawing on dead rabbits and invading letter boxes, where they devour the glue on stamps. 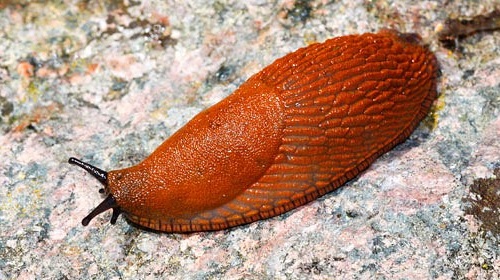 Concerned Daily Telegraph readers have flooded our post room with tales of the “longest and fattest” slugs they have ever seen. “Could this be because we have a nuclear facility a few miles away, and the slugs have mutated?” asks Michael Cattell from Chester. “I have put the obesity epidemic down to my calorie-laden dahlia leaves,” writes Vicki Ely from Eltham. And Liney Cumberlege from Wandsworth explains what happened when her husband dared to confront one: “When he foolishly picked one up with his bare hand, his punishment was to be covered in a thick slime ejected by the ugly garden pest… Slug 1 Husband 0!”

More common this year are two varieties that have crossed the continent: the “Spanish stealth slug” (Arion flagellus), breeding here for 40 years, and the “Spanish slug” (Arion vulgaris), which hitched a lift across the Channel in pot plants and salads.

“Big slugs mature at this time of year, which is why we’re seeing massive amounts,” explains Dr David Glen, a slug specialist with Styloma Research and Consulting. “They’re especially big because we’ve had such ideal growing conditions. Not much will eat them: they have a very sticky, defensive mucus to repel predators.”

In the end, says Dr Glen, gardeners may be fighting a losing battle. “Soon this year’s batch will lay their eggs in the soil and die off. Their eggs will hatch over the winter and next year the invasion could start all over again.”

The BBC reported earlier this year that the giant invaders may pose a threat to native British slugs.  Quite frankly, I hope the damn things eat each other until they're at bursting point - and then burst!  I daresay many British gardeners would agree with me.

I do not consider myself squeamish at all. Grew up on a working farm and all... But slugs. eeeh.

On the other hand they have inspired some fairly high brow music - go and listen to this, you might want to post the link. If you haven't listened to Riders in the Sky before, you will be in for a treat whether or no you like cowboy music...

The Salting of the Slug... Enjoy! I love your blog, by the way.

When I first moved to Oregon years ago from Colorado, I was mowing the lawn and saw what I thought was a large dog turd. Odd, I thought, since I didn't have a dog at the time. But then it moved! Freaked me out, it was a big ol' slug. Yechh! We did not have those in CO.

Sounds like a perfect application for that salt-shooting shotgun.

I live in the Pacific Northwest near Mt. Baker and Bellingham -- slugville.

Get a box of pickling salt, cut the top off and visit your garden dawn and dusk. You do not have to do this every day or both times but the more regular you are, the faster decline of population you will witness.

Drop a couple fingers pinch of salt on the lil' beggars -- they go into shock immediately and ooze out.

Too much salt raises their blood pressure and they have heart attacks.

Just like a daily large dose of table salt does to humans.