Words aren't adequate to describe such a hero


The Atlantic has just published a worthy tribute to a hero of World War II.  I'd heard about him before (the Polish community in South Africa kept his memory alive), but this article 'put flesh on the bones', so to speak.  Here are a few short extracts.

There are very few places that can accurately be described as hell on Earth. One of these is the Auschwitz concentration camp during World War II, where as many as 1.5 million people died during the five years the camp was in operation. 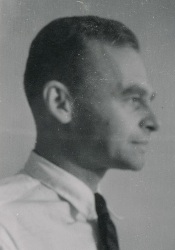 It is into this environment that Witold Pilecki, a 39-year old veteran of the Polish-Soviet War of 1919-1921 who fought against the initial Nazi invasion and a member of the Polish resistance, volunteered himself in 1940. Pilecki's mission was to allow himself to be arrested and, once inside Auschwitz, to collect intelligence for the Polish resistance in the country and the government-in-exile in London, and to organize a resistance from inside the camp.

During the next three years, Pilecki was involved in one of the most dangerous intelligence-gathering and resistance operations of the war. He authored three reports about life inside the camp for the Polish resistance. During his incarceration, Pilecki witnessed from the inside Auschwitz's transformation from a detention facility for political prisoners and Soviet soldiers into one of the Nazis' deadliest killing machines.

An English translation of Pilecki's third and most comprehensive report -- a primary source for this article -- was recently published as a book titled The Auschwitz Volunteer: Beyond Bravery. It is a fascinating first-hand account of virtually all aspects of life inside the camp. The original document is in the custody of the Polish Underground Movement Study Trust in London.

After approximately 2,500 roll calls and 947 days inside the camp by his own calculations, Witold Pilecki and two other inmates escaped Auschwitz. On the night of Monday, April 26 -- the day after Easter Sunday -- the three men were assigned to work in the bakery, which was located outside the camp grounds. They took advantage of a moment when the SS guard wasn't paying attention to cut a telephone wire, force open a door and made a run for it.

When the Warsaw Uprising began on August 1, 1944, Pilecki was in the thick of it. According to Norman Davies' authoritative book Rising '44: The Battle for Warsaw, Pilecki's company focused on a key building on Jerusalem Avenue that overlooked traffic on a crucial east-west thoroughfare. The street is near the present-day location of the Warsaw Uprising Museum.

"Almost every day during the first two weeks of the month, he [Pilecki] captured, lost, and recaptured this building," Davies wrote. "Repeatedly driven out, he repeatedly returned and with deadly cunning repeatedly expelled the German defenders. He lived to fight elsewhere. But so long as he threatened this one vital pressure point, the German command was constantly made to feel insecure." The area came to be known as "Pilecki's Redoubt."

Pilecki was arrested by communist authorities ... on May 5, 1947. According to Pawlowicz, "His fingernails were ripped off, ribs broken, nose broken. His interrogation was very difficult and he was tortured badly." He, and others, were given a show trial for activities against the state the following March. On March 15, he was found guilty on several charges. The court declared, "As a paid agent of General Anders' Intelligence Service, he organized a spy network on Polish territory, collecting information and sending it abroad,' and in doing so 'betraying state secrets.' Pilecki was sentenced to death. A typical capital punishment sentence was carried out within 95 to 105 days of the sentence. The order for Pilecki's execution was given on May 22, two months after his trial.

The final account of anyone seeing Pilecki alive comes from Father Jan Stepien, a Home Army chaplain whose own capital punishment was later changed to a 15-year prison sentence. His description of Pilecki as he was being led to his execution at the Mokotow prison in Warsaw: "He had his mouth tied with a white bandage. Two guards led him by his arms. He could hardly touch the ground with his feet. I don't know if he was conscious then. He seemed completely faint."


There's much more at the link.  Highly recommended reading.

What does one say when one encounters such heroism?  It makes so many other things pale into insignificance by comparison.  General George S. Patton famously said, "It is foolish and wrong to mourn the men who died. Rather we should thank God that such men lived."  I don't necessarily agree with his first sentence, but I certainly agree with the second!  Men like Mr. Pilecki are gifts indeed.

There's an official Polish Web site (in English) about Mr. Pilecki, with more biographical information, photographs, letters, etc.  It's well worth a visit.  (The photograph in the article above, showing Mr. Pilecki in 1946, may be found there.)

I hope you'll join me in praying for Mr. Pilecki, and the souls of all those who died under Nazi and Communist tyranny in Europe.  May their sins be forgiven them, and their souls rest in peace.

Amen!
There are so many unsung heros in so many wars.
May their God receive them all.