I was more than a little taken aback to read of the latest Japanese advance in solid-fuel technology.

Japan is awash in used diapers and the problem is only going to get worse as time goes by. No, the island nation is not in the grips of a baby boom - though the government wishes that were the case. Instead, the diaper dilemma is a by-product of Japan's rapidly aging population. 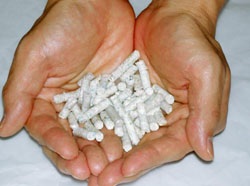 A number of Japanese companies have noted this trend and have come up with a variety of ways used diapers can be utilized. Some ideas, such as Total Care System Co.'s scheme to turn used adult diapers into construction material, obviously need work. Then there's Super Faiths Inc., who have designed a machine that processes used diapers into solid fuel!

The SFD Recycle System, as Super Faiths calls it, first dries, crushes and sterilizes used diapers, then processes the residue into bacteria-free pellets. In just one day, smelly used diapers are converted into fuel ideal for use in stoves and biomass boilers.

A hospital in Tokyo's Machida ward is the first to have installed Super Faith's SFD Recycle System. According to Super Faiths, the system allows hospitals to "stop emission of unnecessary CO2, extricate hospital infection, reduce working costs and labor load, and (establish) long-lasting use of combustion furnace."

Sure sign a country is doomed: sales of adult diapers > sales of babies' diapers.

Apart from being a country doomed by low birth rate, I wonder if the energy costs of processing & sterilising soiled nappies exceeds the energy output of the pelletised fuel. If so, it is hardly a 'win' for a country already hammered by multiple disasters - financial & natural.