Readers familiar with Lockheed's C-130 Hercules aircraft will be aware that in the 1960's, the company produced a civilian version of the military transport.  It was dubbed the L-100 Hercules, and produced in three models:  the original (equivalent to the military C-130E model in cargo capacity and performance), the L-100-20 'stretched' version with a longer fuselage, and the L-100-30 with an even longer 'stretch'.  As far as I'm aware, Safair in South Africa was the single largest operator of the type (as discussed in greater detail in Weekend Wings #39);  if I recall correctly, at one time it had 17 L-100 models in service (although many have since been sold to other operators). 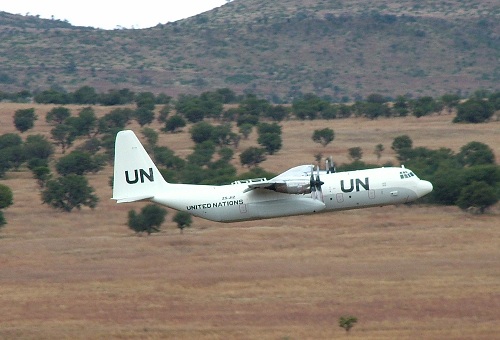 Production of the L-100 ceased in 1992 after only 114 aircraft had been delivered over its 27 years in production (alongside a much larger military production, of course).  A civilian version of the current C-130J Super Hercules model was envisaged, but has so far not been tested or put into production.

The reasons the L-100 Hercules wasn't more popular with freight airlines were threefold:

Having flown in Safair's L-100's on occasion (as well as the South African Air Force's military C-130B's), I liked the plane for what it was (apart from the ear-numbing noise inside!).  I've always wondered why particularly good military transports such as the C-130 weren't more popular with civilian airlines in more 'rugged' parts of the world such as Africa, South America or Alaska.  I suppose high operating costs have something to do with it;  but the military planes can also take a pounding that civilian aircraft generally can't withstand.

That makes recent news from Japan even more interesting, where for some years the Kawasaki C-2 jet transport aircraft (the first prototype of which is shown below - image courtesy of Wikipedia) has been under development for the Japan Air Self-Defense Force. 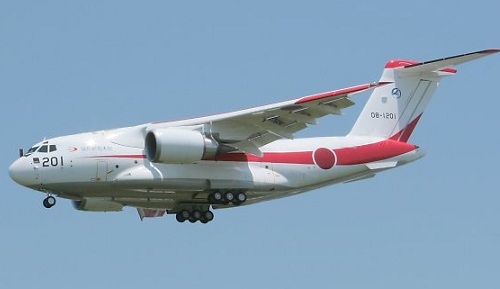 This appears to have set some minds working at Kawasaki.  Flight Global reports:

Kawasaki is consulting potential customers to gauge the level of interest in developing a civilian freighter variant of its C-2 military transport aircraft.

The company calls the proposed variant the YCX, and sees a niche in the market for transporting oversized cargo. Kawasaki has discussed a commercial variant of the C-2 for several years, but says recently the Japanese government agreed to let the company share extensive details of the proposed type with prospective customers.

Sales literature distributed at the Japan Aerospace show in Nagoya indicates that the YCX would be capable of transporting two General Electric GE90 turbofans, a single Sikorsky SH-60 helicopter, or other bulky cargo.

This is intriguing.  A converted narrow-body passenger aircraft like the Airbus A-320P2F has a cargo capacity of up to 23 tons, depending on the model involved (i.e. a similar weight capacity to the L-100 Hercules), while the Boeing 737-700C freighter can carry up to 20 tons.  Both are narrow-body aircraft, unable to match the width or height of the C-2's cargo compartment.  The smallest wide-body freight aircraft, the Boeing 767-300F, has a weight capacity of up to 58 tons, while that of the similar Airbus A330-200F is even larger.  That slots the Kawasaki C-2 neatly into the gap between the biggest narrow-body and the smallest wide-body commercial freighters in terms of weight capacity.  It also offers a much larger cargo compartment than any narrow-body airliner - even wider and higher than some wide-body commercial freighters.  Its military-style rear ramp will make the loading of bulky cargoes much easier.

Commercial freight companies such as UPS and FedEx operate very large fleets of cargo aircraft (FedEx Express having over 650 aircraft as of mid-2012, and UPS well over 500).  They might find the C-2 an interesting medium-size aircraft to slot in between their smaller and larger jet freighters.  Other airlines, like Safair, might find the C-2's military roots appealing, in that it's likely to be more strongly built than a regular commercial airliner, and therefore better suited to operations in more rugged parts of the world.

The C-2 has no real competitors in its size range.  The only other major jet-powered cargo aircraft projects currently under development, Embraer's KC-390 and the joint Indian/Russian UAC/HAL Il-214, are considerably smaller (roughly equivalent in cargo capacity to Lockheed's C-130/L-100).  They're therefore not in the same class as the C-2, instead competing with commercial freighters in the Airbus A320/Boeing 737 size range (where their wider and taller cargo compartments will doubtless make them attractive to some operators).  The larger Airbus A400M has almost exactly the same cargo capacity as the C-2, but will cost more, while its four turboprop engines will render it slower and less fuel-efficient (and more costly to maintain) than the two turbofan engines of the latter aircraft.  The Boeing C-17 Globemaster III is much larger and more complex, carrying more than twice as much cargo, but at a much higher price.

It looks like an interesting aircraft.  Kawasaki may have a winner here.

Loved those old L-100's. Used to work on them, long ago in a land far away. An outfit called Southern Air.

@MSgt B: I remember seeing a Southern Air L-100 in Angola, once upon a time:

If you were on board, pity we didn't have the chance to share a beer in passing! (I was aboard a Safair L-100 at the time.)

My father ferried several C-130s over to somewhere in Africa in the late 1960s. I still have the old photographs.

I have always liked the C-130 but have never had an opprotunity to fly in one.