A recent article at the CATO Institute's Cato At Liberty blog highlights the appalling state of US school education.

[There is an] overwhelming lack of correlation between spending and scores. Per-pupil outlays have taken off like a moonshot while scores have either sat on the runway, or even burrowed down a bit. 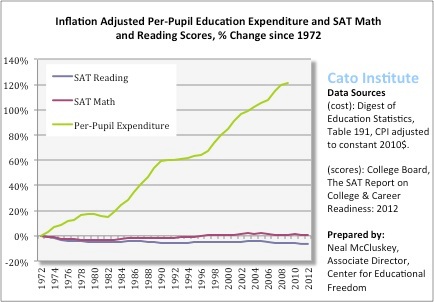 Sadly, this corresponds to the results from long-term National Assessment of Educational Progress exams — which are nationally representative — for 17-year-olds. Again, as the following chart reveals, spending has skyrocketed while scores have, um, decidedly not skyrocketed. 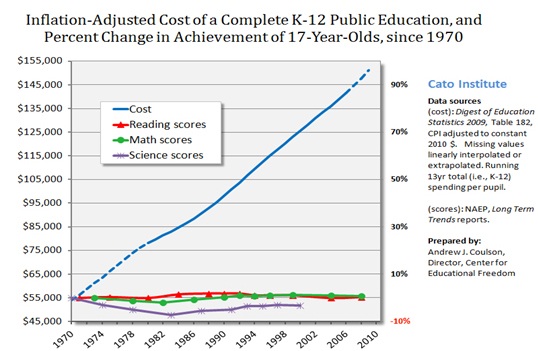 There are factors that make comparing year-to-year SAT scores imprecise. But the trend clearly reinforces what we should already know: we get almost no return for our education “investment.”

This isn't a case of monetary inflation so much as it is of bureaucratic inflation!  Check out your local school district.  See how much money is spent on actual education (materials, buildings, teachers, etc.) and how much is spent on administration (non-teaching buildings, salaries and benefits for non-teachers, etc.)  You'll most likely find that the growth in expenses is overwhelmingly concentrated in the latter areas, rather than the former.

Teacher unions must also bear their share of the blame for this catastrophic waste of resources.  To take just one (particularly egregious) example, a Wisconsin teacher's union forced local school districts to enter into contracts with a medical insurance organization it controlled - at prices far higher than those charged by other firms in that market.  When the legislation governing such contracts was amended to exclude union press-ganging, huge savings resulted - money that could then be applied to more important educational issues, or returned to taxpayers by way of lower tax rates.  Such costs appear to have been the major factor in the steep escalation in education budgets.

Kudos to the CATO Institute for highlighting this very important and controversial issue.  Now, how can we cut not-directly-education-related expenditures and implement Wisconsin-like reforms in other states?

Exactly right Peter, in SC the cost per pupil has risen year in and year out and the ONLY change is more bureaucrats... sigh

Yes, but parents have to bear their share of the responsibility.

A child growing up in a home where books and knowledge (as opposed to "education") are not valued, is defeated from the start.

A child spends only about half his waking hours with a teacher, bad as that teacher may be. What example are the parents setting during the other half?

By way of full disclosure, I should add that I went through teachers' college, but found in my "practice teaching" sessions that the children the parents were sending to school were so unmanageable as to be beyond anything the schools could do for them under the "progressive" system then mandated by the boards of education.

So I became an accountant instead.

I want to teach high school or college. I cannot teach in a public school because a Bachelor's of Education is more important than a PhD in a field. My sibling was penalized by the college's School of Ed for doing a double major in History and Education. There's part of the problem right there.

Objectively, how much is due to inflation.Costs since 1970 have quadrupled or quintupled. It seems to me that with only a tripling of costs, education spending has remained roughly the same.
-Steve_in_CA

Steve: That chart is adjusted for inflation.

But there are plenty of people out there, (I know, I've argued with them) who will say "I'll always vote for more money for schools!" and are absolutely rockheadedly impervious to any mere facts with which you might attempt to persuade them.