The Kavanaugh hearings: this is not democracy, this is rule-by-mob


I'm sure most of my readers have been following the farcical proceedings on Capitol Hill this week, as Senate hearings began into the nomination of Brett Kavanaugh to be the next Justice of the Supreme Court.

We've seen ridiculous, disgusting scenes that don't deserve any part of politics in a constitutional republic like ours.  Protesters have screamed their outrage and vitriol, organized and paid to do so by outside forces inimical to democracy.  I've clipped the detail below from one of the photographs of a man paying protesters (you can see more at the link): 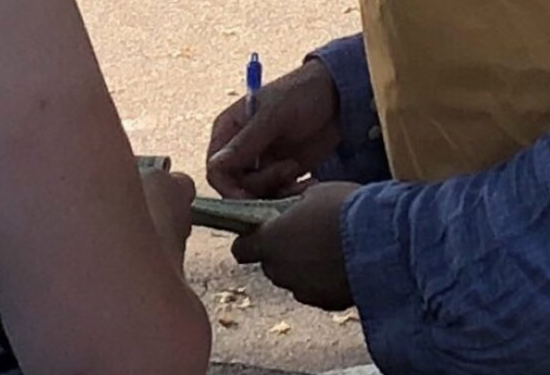 Note the brazenness of the proceedings.  He simply didn't care that he was doing this out in the open, where anyone could see him.  He and his bosses don't care whether or not people object.  They know the mainstream news media are on their side, and won't cover the story;  and they're confident they can prevent any legal repercussions, through pulling the strings of power that they control.  They hold democracy and true popular opinion in contempt.

Politicians have openly admitted to plotting to disrupt the proceedings.  They did so on camera.  They'd scream blue murder if someone did the same to them;  but they don't care that people know they've done it to others.  Again, they're confident their media cronies will protect them by not publicizing the truth.  (How much coverage of this have you seen in the major mainstream media outlets?  How much airtime has it received, and how many column inches in newspapers?  Go count them for yourselves.  It won't take you very long at all.)  The fact that such actions at least dishonor, if not break, their oath of office - since their actions, IMHO, fail the standard of "support[ing] and defend[ing] the Constitution of the United States against all enemies, foreign and domestic" - doesn't seem to bother them at all.  That's the same oath -word for word - that I swore when I entered Federal law enforcement service.  If I dishonored or broke it, I would have expected at least termination, if not jail time.  Can we expect similar sanctions for them?  I won't hold my breath waiting . . .

Perhaps that's the scariest thing about these hearings.  They show that a large part of the American body politic is demanding rule-by-mob.  They don't mind being caught at it, either.  To them, the Constitution is nothing more than dead words by dead men, to be manipulated, twisted, distorted, and if necessary reinterpreted into oblivion.  Standards of civilized, decent behavior are meaningless.

There will doubtless be those who argue that political dissent is nothing new in this country.  Diatribe, vitriol and mob action have never been far from the mainstream, and have broken into it from time to time - most notably during the pre-Civil War era.  My response is simply, have we not learned from the past?  George Santayana's warning was prescient, and still rings loudly in our ears:  "Those who do not remember the past are condemned to repeat it".  We discussed that risk just a few days ago.

I'm not going to quibble about party politics, or positions, or policies, or anything else.  I'm simply going to say that any individual who behaves in ways such as those described above, and/or anyone who supports them, are unworthy of our support.  Period.  No debate, no discussion, no qualifications - they are not worthy of our vote.  It doesn't matter which political party they belong to, or whether we support that party or not.  As individuals, their contempt for democracy and our constitutional republic disqualifies them from the support of any rational person.  I can only hope that thinking Americans, finding themselves in the constituencies of these individuals during the forthcoming election, will vote against them, irrespective of their party, and for their opponent.

It's no longer a question of party political loyalties.  It's a question of whether our republic, as established by our founders, will survive.  Those who seek its demise should forfeit our support.

I'd say this could have other explanations, but these people spend a day in conniptions because a woman had her thumb and index finger close together, so apparently....

The Republic is already dead. It's just still twitching.

Nobody is talking about the next civil war/revolution as "if" any more.

Well to be slightly fair... paying for mercenaries is an old american tradition. There is a real debate whether such mercenaries are to be preferred over the true believing fanatics or no.

Henry II: You see, they love us dearly, these French. (laughs)
Becket: So they should. We paid them enough.
Henry II: In that case, we should have found some that didn't dress out of a rag barrel.

Fox sent a roving reporter and cameraman out to cover the protesters outside the hearings.
Two things in particular caught my attention.
Reporter asked on protester what his main issue was with Kavanaugh. His answer, they just paid me to hold this sign.
One of the organizers finally ordered the reporter and film crew to leave, said they were violating their right to free speech.
Got quite angry when the reporter refused, saying he was only filming those who gave him permission.
Cop finally showed up and gave the money quote of the day. Looked the organizer right in the eye and said, "your right to free speech does not trump his right to free speech. Until one of you breaks the law you're both entitled to be here."

(b) The punishment for a violation of subsection (a) is—

(2) a fine under this title or imprisonment for not more than one year, or both, in any other case."

Given that photographs of the individuals in question have been circulated widely, and that taking cash to perform the specified federal offense is furthermore a criminal conspiracy, a separate federal felony, and another specific count, one wonders why, perchance, the FBI and or Capitol Police have not investigated and made multiple arrests in this case.

And BTW, where in H#!! is the United States Attorney for the District of Columbia on this matter?

I saw a quote from Daniel Greenfield that we are on the slippery slope toward a civil war. The democrats refuse to accept the results of the election when felonia von pantsuit lost an election that by all rights she should have won if she hadn't been such a bad candidate. When Obama won, we were not happy, but we accepted the election results, the democrats only accept the results if their candidate wins. This is not good for the health of the republic. The peaceful transfer of power has been a hallmark of the United States, but every election in this century if a democrat hasn't won, the election is called into question and the word "Illegitimate" is bandied about. When one side refused to accept the results on a regular basis this is the grounds for tyranny in the future.