Last weekend I published Weekend Wings #30, which examined the US Navy's carrier-borne aviation, present and future. In the process, I looked at what other countries were operating and building in the aircraft-carrier line, including the Royal Navy's proposed Queen Elizabeth-class carriers.

In an article today, the Daily Mail takes a closer look at these carriers, including photographs of a model of the ship. Click the pictures for a larger view.

It’s a 1:200 scale model of what will be the two biggest warships Britain has ever launched – the 65,000-ton HMS Queen Elizabeth and HMS Prince Of Wales. 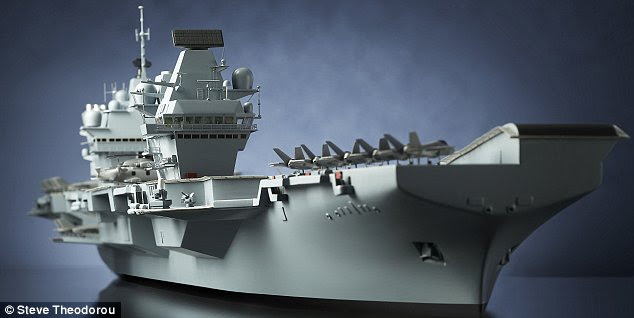 Each ship will have nine decks topped by a vast flight deck and will tower six metres taller than Nelson’s Column from keel to masthead.

‘Cover the flight deck with grass and it would be a par four,’ says one of the design team.

They will carry 36 state-of-the-art Joint Strike Fighter stealth jump-jets and four helicopters each, and be able to get 24 planes airborne within just 15 minutes.

‘All the major navies in the world are now building them,’ says Dr Lee Willett, head of the Maritime Studies Programme at the Royal United Services Institute.

‘The Russians have one of their big carriers, the Admiral Kuznetsov, back at sea and have stated that they plan to build 12 carrier battle groups. The Chinese and the Indians are also under way with plans, the Japanese are building a destroyer that will act as a helicopter carrier and the US are working on new-generation carriers.

‘We’re an island nation and we have global interests so we need these four acres of moveable sovereign airfield that we can deploy wherever we want, whenever we need them.’

Aerial view,
showing the take-off ramp (A),
the giant lifts (B), the runway (C),
and the helicopter (D)

What the building of the carriers also shows is that Britain is running out of friends.

Willett says, ‘The world is an unstable place and, post-Iraq and the global war on terror, access to other nation’s territory or airspace is more difficult.’

‘Friendly nations are hard to find and it becomes even harder once you have taken over local air bases, which are then vulnerable to attack.

'But there is a way to avoid giving yourself a logistical nightmare and becoming a target. Without having to ask anyone you can put an aircraft carrier 15 miles offshore in international waters and carry out operations from there without a single person needing to set foot on land or a single supply convoy coming under fire.

'And you won’t need to go through any diplomatic hoops.’

But there are troubled waters ahead for this huge project, which still has the potential to go spectacularly wrong. Britain has never put together a ship in this way, on this scale, and there are fears over whether we have the commitment or the skilled workers to build the vessels to order and on time.

There have been criticisms of cost-cutting measures, concerns linger over whether the engines will work and, just to add to the uncertainty, the planes it is hoped will fly off the carriers have yet to be built.

No single shipyard in this country has the infrastructure or personnel to construct the entire ship, so the plan is to build them in sections in different shipyards. Work on the lower bow section has already begun in Devon. The other shipyards are set to begin cutting steel in March 2009.

The aft block will be built in Glasgow, the central block in Barrow-In-Furness and the forward section in Portsmouth. The remaining upper sections will be constructed in smaller docks; bids from shipyards are still being considered.

The blocks will then be transported independently to Rosyth to be put together. The integration process is scheduled to take around two years and the plan is that as soon as the first ship floats it will leave and then work will begin on the second.

Putting aside questions over whether the money or political will could dry up before these carriers are completed, simply the practicality of gathering the parts together is a logistical nightmare.

‘Transportation is one of our biggest problems,’ says Knight. ‘Ideally you would build part of the ship in a dock, flood the dock, float the section of ship out and tow it to Rosyth, where you float it into another dock and let the water out so it’s left resting on blocks. You then connect it to the next section.

‘But unfortunately the aft section doesn’t float. We’ve looked at barges to transport it, but there’s only one big enough to take that weight and who knows if that barge will be around when we need her.

‘Alternatively we could put tanks on her to give extra buoyancy – basically enormous floats. But this is risky because we’ll have to tow it from the west coast of Scotland to the east coast.’

If and when all the pieces do finally meet, then putting the thing together should be like assembling a Lego model. But this is a massive undertaking – each of these gigantic blocks will weigh up to 10,000 tons.

‘Joining these enormous sections together, physically hammering them along a block and then making sure they’re exactly aligned will be a pretty hairy operation,’ says Knight.

The project team admits that designing a ship with the desired features to a tight budget has been challenging. The result, they say, is notable more for simplicity and efficiency rather than hi-tech innovation. The most revolutionary element of the CVF design is its highly mechanised weapons handling system, which means a cut in the crew numbers required – from 4,500 on a US carrier (including a team of 150 just to move the weapons around) to 1,450.

One of the first things to go was nuclear power. Most modern aircraft carriers, including the American ships, are powered by an on-board nuclear reactor.

‘This is a brand-new ship, so getting through all the safety aspects of nuclear power would have been hideously expensive,’ says Knight.

Instead, like modern cruise liners, the HMS Queen Elizabeth and HMS Prince Of Wales will be propelled by electrical motors, powered by two Rolls-Royce gas turbines and four diesel generators. The diesel generators are more economical and used for general cruising, but when you need to get somewhere fast or need more headwind to help the planes to take off then you switch to the gas turbines.

Money has also been saved in side armour protection, though Knight insists this was a strategic rather than a budgetary issue.

‘The CVF’s first line of defence is the frigates and the new Type 45 destroyers around us,’ he adds. ‘Our only self-defence is close-in weapons systems and small guns. Instead, what you have on the ship is 36 of the most lethal aircraft ever made.’ 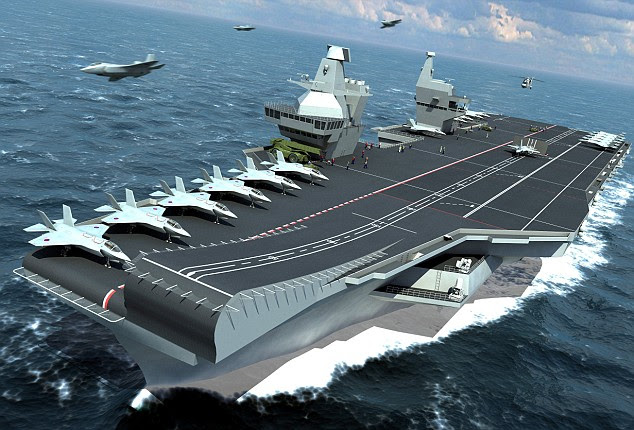 Artist's impression of the new ship

• The surface of the 16,000 square meter flight deck (172,222 square feet, or almost 4 acres - the size of three regulation NFL football fields, including the end zones) is covered in a grainy,heat-resistant paint,similar to very coarse sandpaper. The entire painted surface amounts to 370 acres - slightly bigger than Hyde Park.

• Two huge lifts, each with a 70-ton capacity, are capable of transporting two aircraft from the hangar to the flight deck in 60 seconds. The ship will be home to 36 Lockheed Martin F-35B Joint Strike Fighters and four EH-101 Merlin helicopters.

• The ground-breaking twin-island layout allows more deck space for aircraft and better visibility of the flight deck. The forward island is for navigating the ship; flight control is based in the aft island.

• There are 11 full-time medical staff on board managing an eight-bed medical suite, operating theatre and dental surgery.

• An onboard water treatment plant produces over 500 tons of fresh water daily.

• Cabins are spacious and cruise-liner style, with en-suite toilets and shower facilities. Officers and senior ratings have single or two-berth cabins. The maximum number of crew in a cabin is six.

• The carrier will carry more than 8,600 tons of fuel, enough for the average family car to travel to the Moon and back 12 times. This gives a range of up to 10,000 nautical miles.

• Top speed will be in excess of 25 knots, sufficient to cross from Dover to Calais in an hour.

• The two five-blade propellers are each 30ft in diameter - that's one-and-a-half times the height of a double-decker bus.

Looks like an interesting and innovative design. However, there are two potential problems. One is that the design will allow for the installation of catapults and arresting gear, but they won't be installed during building, for reasons of economy. That means conventional carrier aircraft won't be able to land on or take off from them - a potentially crippling liability in operations with allied fleets like those of the US and France, which operate such aircraft. The second is the lack of nuclear power. With today's increasingly electrically-powered and -operated weapons (including the first generation of laser beam weapons, just appearing on the market, as discussed in Weekend Wings #30), the ability to generate enormous amounts of electricity will be crucial to a ship's combat-effectiveness and survival. I rather suspect ships lacking a nuclear reactor won't be well placed to do this . . . and that could significantly affect their viability in future operations.

Still, an interesting effort. Let's hope the realities of the budget and the demands of the Welfare State allow them to be built! See the linked article for more information about them.

Excellent post Peter, and yes, it will be interesting to see what they do with the Cats and "A" gear... Also the no nuke stance is pretty interesting, considering the submarine fleet...

These are high value targets, needless to say. An Iranian, for example, Kilo class diesel electric sub, given a lucky and bold commander, will ruin their day, and relatively cheaply. The Chinese can do even better now.