I've written before about the tragedy of Air France Flight 447, which crashed in the South Atlantic Ocean in 2009 with the death of all aboard. Now Popular Mechanics has published an in-depth examination of the cockpit voice recorder and what it reveals about the last minutes of the flight. Here's an excerpt. 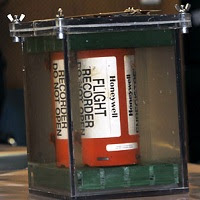 We now understand that ... AF447 passed into clouds associated with a large system of thunderstorms, its speed sensors became iced over, and the autopilot disengaged. In the ensuing confusion, the pilots lost control of the airplane because they reacted incorrectly to the loss of instrumentation and then seemed unable to comprehend the nature of the problems they had caused. Neither weather nor malfunction doomed AF447, nor a complex chain of error, but a simple but persistent mistake on the part of one of the pilots.

Human judgments, of course, are never made in a vacuum. Pilots are part of a complex system that can either increase or reduce the probability that they will make a mistake. After this accident, the million-dollar question is whether training, instrumentation, and cockpit procedures can be modified all around the world so that no one will ever make this mistake again—or whether the inclusion of the human element will always entail the possibility of a catastrophic outcome. After all, the men who crashed AF447 were three highly trained pilots flying for one of the most prestigious fleets in the world. If they could fly a perfectly good plane into the ocean, then what airline could plausibly say, "Our pilots would never do that"?

There's more at the link. An even more chilling account, by the same author, of 'What Passengers Experienced During AF447′s Final Moments' may be found here.

AF447 was a horrendous and entirely avoidable disaster. I daresay Air France will be hit by lawsuits from many of the families of those who died, now that pilot error has been definitively established as the cause of the accident. Still, if there's any silver lining to this very dark cloud, one may hope that the lessons it's taught us might save future pilots from making similar errors. That may be the most fitting and lasting memorial to those who died.

Have you heard the CVR for EAL flight 401?

That was some avoidable shit. Three aircrew distracted by a 50 can't lightbulb.

My daddy use to tell me he quit riding a motorcycle when he realised he thought he was smarter than the machine.

Overconfidence and lack of knowledge of the proper operation any mechanical device dooms the human operator.

My uncle had a career with the Air Force, and has told me a few of his adventures. One night over North Vietnam in an F4, he was hit with vertigo as he came out of a turn. The conversation with his man in the back seat went something like this:
"Oh crap."
"What's wrong?"
"I'm upside down."
"Want me to take it?"
"If you do, I'll puke."

He kept his head about him, and in a few minutes he was OK.

It is a shame that modern commercial pilots are taught to "manage" the aircraft, not fly it. My dad (started in J-3's and Stearmans and retired in B-52's) taught me, fly the aircraft first, let the rest take care of itself. I had a long conversation with a CFI about modern pilot training. Turns out he got out of working for a major carrier and took up a second career because he didn't like where things were going.

No stick shaker, no tactile feel to the stick, and 'feminine' logic... NONE of those three are good for pilots trying to figure out an emergency!

And "averaging" input between sticks? What the hell kind of crap is that?! And neither pilot can feel what the others input is? If the co pilot had felt what the pilot was doing, he would have instantly known what was going on.
Horrific- they blew through 38,000 feet of air with the stick held full back- this is primary training stuff. No cross check of altitude, airspeed, ground speed, power- Yikes.