Bungling pharmacy staff accidentally caused an explosion which blew off the front of their shop as they tried to get rid of the smell from a dead rat.

Workers in Wimbledon, south London, put down a scented candle to try and get rid of the stench before spraying the area with an aerosol can.

But the spray mixed with the naked flame, causing a large blast which knocked the door off, dislodged brickwork and made a false ceiling collapse. 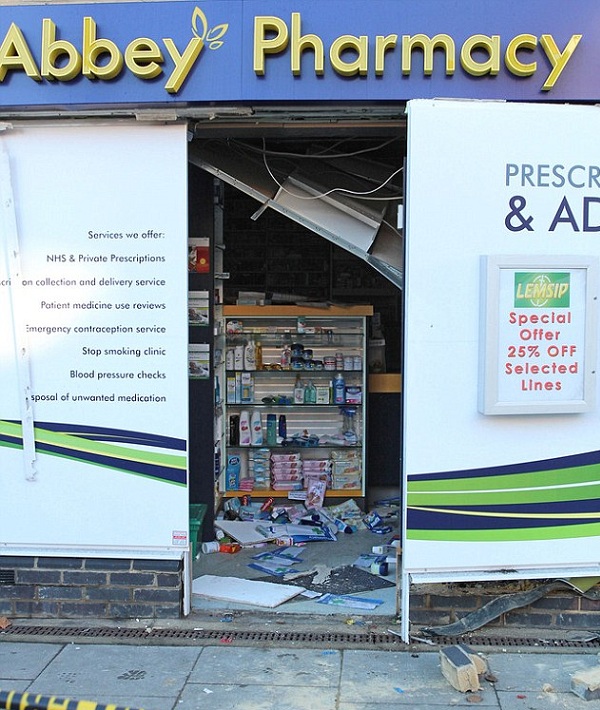 A worker at Abbey Chemists was rushed to hospital after suffering slight burns to their hands and face in the fire yesterday.

Another staff member had to be treated at the scene for shock, a spokesman for the London Fire Brigade said.

The London Fire Brigade spokesman added: 'Never spray air freshener or deodorant near a candle or naked flame, as we’ve seen here the results can be extremely dangerous.'

Perhaps I was unduly well taught by my parents, but I'd assumed everybody knew it was dangerous to expose an aerosol spray to a naked flame! Clearly, I was over-optimistic . . .

In other words, "Never under-estimate the power of a determined fool. NOTHING is foolproof."

OK, but a full can of aerosol deodorant plus a match is a mini-blowtorch and useful for igniting damp wood etc. IF you direct the flame at the target.

Just don't blanket-spray an entire area where there is an open flame.

Of course, I know this only from Wikipedia. Would never dream of trying it myself:-)

Human IQ is fixed.
The population is rising.

Years ago, when people used to burn trash in 50 gallon drums, I saw the results of someone throwing a supposedly empty spray can in the drum. Luckily no one was standing next to it when it went off, because the fireball that came out was pretty amazing, and scared the hell out of everyone in the area.

As John pointed out, the mini-blowtorch aspect can be quite handy if you pay attention to what you're doing.

This doofus obviously didn't know what they were doing, or, didn't pay attention. Same net result.