China's in the news today for two very different reasons.

First, that country's first aircraft carrier (the former Soviet Admiral Kuznetsov class ship Varyag, which has not yet been formally named in Chinese service) has returned to port following its second trial voyage, after being refurbished over several years.

(Image courtesy of China Defense Blog.
Open it in a new tab or window for a much larger view.)

An article in the Winter 2012 Naval War College Review gives an overview of the ship, and analyzes China's carrier ambitions (link is to an Adobe Acrobat document in .PDF format). Here's an excerpt.

Ex-Varyag is currently undergoing a series of predelivery tests and modifications by Dalian Naval Shipyard and the Chinese defense industry, including trials in a rectangular area off Dalian, within China’s territorial waters. This has been an incremental process. First, under PLAN supervision, the shipyard checked all major systems and equipment (main propulsion, auxiliary, damage control, deck, electrical, interior environmental safety protection, navigation, and spares) to ensure that the carrier’s hardware met contract requirements for sea trials. Testing of the engines, for instance, explained the appearance of smoke at the pier. Then, several days before the first sea trials, design and construction teams continued to work while PLAN personnel rehearsed the task of getting the ship under way as realistically as possible and made preparations.

The PLAN is apparently satisfied now with the quality of the ship’s refurbishment; China’s defense industry and its oversight organizations have been restructured to address previous concerns about inadequacies in development and production of military systems. Following completion of the test and trial program, there will be a ceremony to name the vessel, and it will be commissioned and accepted into PLAN service. The crew members can then leave the auxiliary vessel (hull number 88), currently being used to house them and to serve as a base for their training, and take up residence on board the carrier itself.

The carrier’s series of sea trials are being conducted close to home in order both to make the vessel a bit less accessible to prying eyes (and unauthorized digital cameras), and to keep it near home port should mechanical problems materialize. For the next several years, the focus will be on testing equipment and getting the crew used to operating such a large ship and then, having achieved some proficiency in these basic skills, on flight testing and training. Key questions that may arise in the course of future sea trials include: 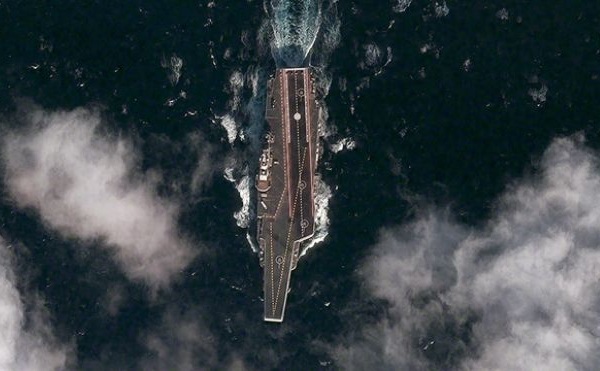 (Satellite image courtesy of US Navy)

Aircraft operations are of course the fundamental reason for having a carrier capability, but actual landings of fixed-wing aircraft (deck-handling practice and even takeoffs, by aircraft lifted on board by crane from a pier, represent a lower hurdle) will likely be accomplished gradually. This process could be protracted, particularly if initial, modest efforts run into problems. However, in determining possible operational-capability trajectories, one must consider China’s deck aviation options broadly, taking into account particularly the experience of destroyers and frigates in the nine task forces sent to the Gulf of Aden to date. What is certain is that for any nation, mastering carrier operations requires mastering a complex system of systems that includes research and development, supply and logistics, training, combat air operations, maintenance, and personnel and facilities management.

Capabilities. While ex-Varyag’s capabilities clearly represent a “work in progress,” it is not just a “training carrier” per se, as USS Lexington (AVT 16) was in the last decades of its storied career. Its hardware does not need to be upgraded radically for operational service; it already possesses a Dragon Eye phased-array radar, a new point-defense missile system, and a new close-in weapon system. The Dragon Eye can reportedly track up to a hundred targets while engaging fifty simultaneously, detect targets out to sixty-five nautical miles (120 kilometers), and track targets out to 48.6 nautical miles (ninety kilometers). Together, no matter how it is portrayed officially, these factors make it more than a training ship and rather a modestly capable warship.

Trajectory. China’s defense-industrial base, which has long favored pragmatic incrementalism, not surprisingly has adopted a “crawl, walk, run” approach to carrier development. By this logic, the first domestic aircraft carrier hull, already reportedly under construction (and perhaps others as well), will closely resemble the Russian Kuznetsov class (of which Varyag was originally a member), albeit with largely internal improvements that are invisible to casual observers. This would be not wholesale copying but emulation and incremental improvement.

According to the U.S. Department of Defense, “the PLA Navy will likely build several additional carriers in Chinese shipyards.” Specifically, “construction of China’s first indigenous carrier, which would likely have a . . . displacement and design [similar to those] of the [ex-Varyag], could begin as early as 2011. If China commences construction in 2011, the PLA Navy could have its first indigenous carrier achieving operational capability as early as 2015.” The nature of China’s second domestic aircraft-carrier hull should offer a good indicator of where its program is headed overall: Will it suggest the breaking of new ground, a branching out, or a continuation of incremental improvements on a basic design?

Equipment. Not enough is known publicly about the original machinery or the ship’s condition when the Chinese obtained it to make detailed judgments. But given China’s strong and growing shipbuilding capabilities and the ultimate use of ex-Varyag as China’s first aircraft carrier, it seems doubtful that anything was too problematic for Chinese technicians to work with effectively. Moreover, it seems unlikely that China would put so much work into ex-Varyag if the hull were fundamentally unsound. The engineering plant is now likely complete and fairly robust, although without firsthand accounts such conclusions are highly speculative. Any secondary systems associated with flight operations not yet installed should come shortly.

There's much more at the link. Highly recommended reading for naval, military and geopolitical buffs.

However, China's plans for a fleet of aircraft carriers may run aground on the rocks and shoals of the global economic crisis, which appears to be hitting home in that country as well. The Telegraph reports:

China's credit bubble has finally popped. The property market is swinging wildly from boom to bust, the cautionary exhibit of a BRIC's dream that is at last coming down to earth with a thud.

The question is whether the People's Bank can do any better than the US Federal Reserve or Bank of Japan at deflating a credit bubble.

Chinese stocks are flashing warning signs. The Shanghai index has fallen 30pc since May. It is off 60pc from its peak in 2008, almost as much in real terms as Wall Street from 1929 to 1933.

"Investors are massively underestimating the risk of a hard-landing in China, and indeed other BRICS (Brazil, Russia, India, China) ... a 'Bloody Ridiculous Investment Concept' in my view," said Albert Edwards at Societe Generale.

"The BRICs are falling like bricks and the crises are home-blown, caused by their own boom-bust credit cycles. Industrial production is already falling in India, and Brazil will soon follow."

"There is so much spare capacity that they will start dumping goods, risking a deflation shock for the rest of the world. It no surpise that China has just imposed tariffs on imports of GM cars. I think it is highly likely that China will devalue the yuan next year, risking a trade war," he said.

China's $3.2 trillion foreign reserves have been falling for three months despite the trade surplus. Hot money is flowing out of the country. "One-way capital inflow or one-way bets on a yuan rise have become history. Our foreign reserves are basically falling every day," said Li Yang, a former central bank rate-setter.

The reserve loss acts as a form of monetary tightening, exactly the opposite of the effect during the boom. The reserves cannot be tapped to prop up China's internal banking system. To do so would mean repatriating the money – now in US Treasuries and European bonds – pushing up the yuan at the worst moment.

The economy is badly out of kilter. Consumption has fallen from 48pc to 36pc of GDP since the late 1990s. Investment has risen to 50pc of GDP. This is off the charts, even by the standards of Japan, Korea or Tawian during their catch-up spurts. Nothing like it has been seen before in modern times.

I advise anyone worried about the current world situation, in economic, social, political or military terms, to watch the situation in China very, very closely. If China's economy tanks, it may very well spark massive internal unrest and disruption; and, to avert that, China's government may very well look to foment external military action (possibly including an attack on Taiwan, or responding to any threat to Iran or Pakistan, or occupying disputed islands in the South China Sea, or a combination of some or all of these and/or other measures) in order to re-focus internal agitation towards external issues. On the other hand, if China's economy sinks too far, it may not be able to afford external aggression, which might be a silver lining in this particular cloud.

Either way, however, it's not a happy prospect.

"On the other hand, if China's economy sinks too far, it may not be able to afford external aggression, which might be a silver lining in this particular cloud."

Your history lessons were almost certainly more thorough than mine (I went to US schools) but I cannot recall an instance where a lack of money stopped a country from going to war that wanted to.

Especially a communist country and most especially China ( the one child per family law).

Is it an ominous sign in the South China Sea area (beware, Taiwan and the Seychelles)?

However, I really have to wonder if that thing, once they fired up the boilers, has gone anywhere without a US nuclear sub somewhere nearby, keeping tabs on things. If a shooting war broke out, I'd imagine China either needs some stellar ASW capability or the Varyag will be converted to an artificial reef in short order.