Looks like 'tunnel rats' were part of ancient warfare, too


I'm sure many readers are familiar with the accounts of so-called 'tunnel rats' during the Vietnam War (particularly in the infamous Cu Chi tunnels). In more recent years, their successors have been hard at it in the karez irrigation tunnels, or qanats, of Afghanistan.

I'd known that tunnel warfare dates back to medieval siege warfare, where a besieging force would try to undermine the walls of a castle by burrowing beneath them. The same technique was used in World War I to plant mines beneath enemy defenses, which sometimes led to counter-tunnels and fierce fights far below ground between the tunnelers of both sides. However, I've now learned that tunnel warfare dates back much further than even the medieval period. Reuters reports:

Even with the proper equipment and intestinal fortitude, it is easy to lose your cool when crawling through the expansive ancient tunnel systems dug by Jewish rebels to fight the Roman Empire.

The hundreds of hideouts, ranging from just a few meters deep to seemingly unending labyrinths, are popular among Israeli archaeologists and adventurers. But the subterranean mazes, which date back as early as the first century B.C., are virtually unknown to foreigners.

The foothills of Jerusalem around the ancient city of Beit Guvrin are like an ant farm and best tell the story of the guerrilla tactics used in the Bar Kochba rebellion. The rebel strategy worked for a while, but the Romans eventually defeated them.

Earlier caves have been found farther north in the Galilee, where team members were called to explore a tunnel system found just a few months ago. Archaeologists had uncovered what they thought was a standard, 8-meter-deep (26-foot-deep) water cistern, but later noticed it had narrow crawlspaces shooting off its base. 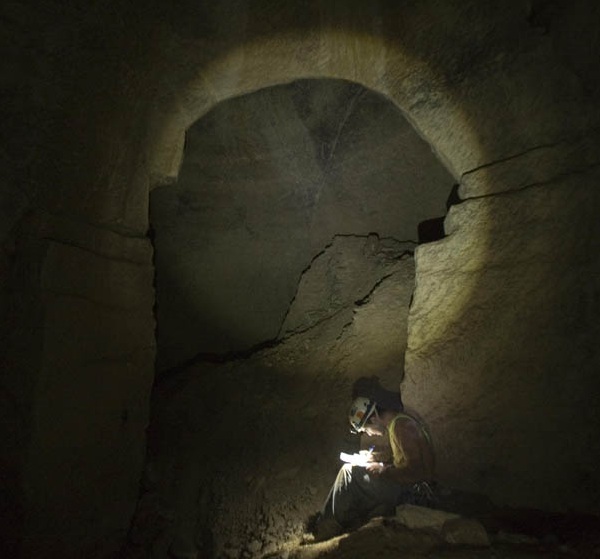 The team rappelled to the lower level and became the first people in 2,000 years to tread there. With a metal detector and laser measurer, they spent hours mapping just a fraction of the tunnels.

Researchers have also mapped many of the nearby cavern hideouts that dot the cliff side of Mount Arbel overlooking the Sea of Galilee. Roman historian Josephus described in his writings how King Herod lowered his men in chests from the cliff to the cave openings and, using fire, overtook the rebels.

There's more at the link. Wikipedia also has an interesting article on tunnel warfare.

I have this eerie mental picture of a Vietnam-era 'tunnel rat' meeting up, somewhere in the hereafter, with a Roman legionary who'd had the same job fighting Jewish rebels. I can just see the two of them exchanging war stories over a glass or three of whatever the Heavenly pubs serve under such circumstances!

As I recall from my hazy memory, when the Assyrians came to Jerulsalem to take out the city after they revolted, they had to tunnel in to get past the fortifications. I'm sure digging has been around once man realized that war was 3D not linear. Great article.

You might find the Heros in Hell series interesting. A Bangsian fantasy in which a number of historical characters continue their machinations and conflicts in the afterlife. Hint: No one likes the Viet Cong.

Interesting chat would be right...