The hazards of mowing grass near crocodiles!


It seems an Australian saltwater crocodile found a new toy. The Telegraph reports:

A giant saltwater crocodile named Elvis with an apparent affinity for household machinery charged at an Australian reptile park worker before stealing his lawn mower.

Tim Faulkner, operations manager at the Australian Reptile Park, north of Sydney, was one of three workers tending to the lawn in Elvis's enclosure when he heard reptile keeper Billy Collett let out a yelp. Mr Faulkner looked up to see the 16-foot, 1,100-pound crocodile lunging out of its lagoon at Mr Collett, who warded the creature off with his mower.

"Before we knew it, the croc had the mower above his head," Mr Faulkner said. "He got his jaws around the top of the mower and picked it up and took it underwater with him."

The workers quickly left the enclosure. Elvis, meanwhile, showed no signs of relinquishing his new toy and sat guarding it closely all morning. 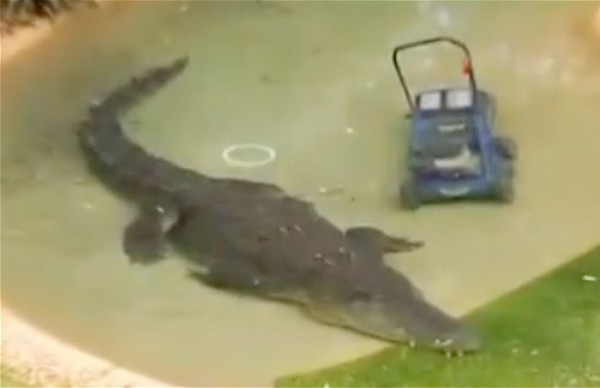 Eventually, Mr Faulkner realised he had no other choice but to go back in after the mower.

Mr Collett lured Elvis to the opposite end of the lagoon with a heaping helping of kangaroo meat while Mr Faulkner plunged, fully clothed, into the water. Before grabbing the mower, however, he had to search the bottom of the lagoon for two 3-inch teeth Elvis lost during the encounter. He quickly found them and escaped from the pool, unharmed and with mower in tow.

Though many may question the wisdom of going after a couple of teeth with a massive crocodile lurking just feet away, Mr Faulkner said finding them was critical. "They clog up the filter systems," he said.

And, perhaps more important, he said, "They're a nice souvenir."

EDITED TO ADD: Here's a video report about the incident.

Considering that saltwater crocodiles were responsible for what may be the single largest death toll in history wrought by animals on humans during the Battle of Ramree Island in World War II, I don't think I'd have been willing to mow the grass in their vicinity in the first place!

The same scenario with lawn mowers used to occur on the late Steve Irwin's old Crocodile Hunter TV show. I'd guess you just have to think of it as an occupational hazard at reptile parks.

If it ate the mower, would the croc tick, whirr or just cough up grassballs every so often?

far as I'd be concerned, he could KEEP the mower...