I was saddened to read today that Vaclav Havel, the Czech playwright and politician, has died. He was a seminal figure in what was then Czechoslovakia during the Cold War, and displayed courage, integrity and determination. He led the revolution that overthrew the Communist government of that state in 1989.

The Telegraph says of him:

Vaclav Havel, who died on December 18 aged 75, was President of Czechoslovakia and later of the Czech Republic, but enjoyed his finest hour before he attained office when, in December 1989, he led “the Velvet Revolution” which toppled the communist regime in Czechoslovakia. 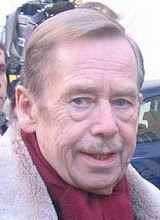 In those crucial days Havel was able to draw upon the moral authority which he had built up over two decades as a dissident playwright. By contrast, as President of Czechoslovakia between 1990 and 1992 he could not prevent the disintegration of the Czechoslovak federation into its two constituent parts. And after he became President of the Czech Republic in 1993 he was little more than a titular head of state.

Havel, who had always been sceptical of the political process and who had never aimed at office, did not repine at the inevitable limitations of power. To the end of his life he commanded respect — even devotion — as a man who had suffered for his convictions. During the 1970s and 1980s he served several jail sentences, the longest of them four and a half years’ hard labour.

At the root of his protest had been a visceral loathing for what communism had done to Czechoslovakia. In 1990, in one of his early addresses as President, he spoke of the fallen regime as “a monstrous, ramshackle machine” which had bequeathed not merely economic failure but also “a spoiled moral environment”.

“We have become morally ill because we are used to saying one thing and thinking another,” he explained. “We have learned not to believe in anything, not to care about each other. Love, friendship, mercy, humility and forgiveness lost their depth and dimension.”

“Some say I’m a naive dreamer trying to combine the incompatible: politics and morality,” he wrote in Summer Meditations (1992). “I am convinced that we will never build a democratic state based on law if we do not at the same time build a state that is ... humane, moral, intellectual and spiritual, and cultural.”

Such an aspiration was beyond the grasp of workaday politics. But then Havel was never a politician. It was only by accident, he liked to emphasise, that he had ever become a dissident. “We just happened to,” he explained, “We don’t know how. And we started landing in jails — we also don’t know how. We just did some things that seemed the decent things to do.”

There's much more at the link. I highly recommend reading the entire obituary.

The world is a poorer place for Mr. Havel's passing. May he rest in peace.

The world is definitely a poorer place, he always seemed to me one of the great positive public figures of the later twentieth century. Courage, integrity and humility all come to mind.