That's a heck of a survival story!


I'm astonished to read the account of two castaways in the Pacific Ocean. The Daily Mail reports:

When Pacific Islanders Uein Buranibwe, 53, and Temaei Tontaake, 26, found themselves adrift, with their GPS locator broken, they feared they would meet the same end as their long-lost uncle, Bairo.

He had cast off from their island home, Kiribati, to go fishing one day in the Fifties and had never returned. He was assumed drowned in the vast expanse of the South Pacific.

But neither Mr Buranibwe nor Mr Tontaake could have imagined how closely their fate would mirror that of their missing relative.

Mr Buranibwe and Mr Tontaake's odyssey had begun when they lost their way during the 50km journey home from a neighbouring atoll where they had gone to catch fish.

With their GPS out of batteries they drifted for weeks in the Pacific, surviving on what little fish they could catch and resorting to drinking brine when their water supplies ran out. 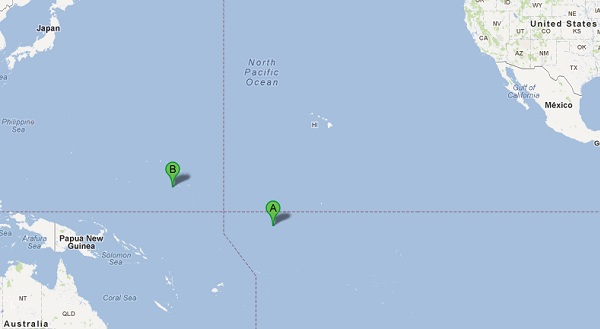 Route of the castaways: from Kiribati (A) to Namdrik (B)

After 33 days adrift their fishing boat was washed into Namdrik, where the first residents they came across took them to the only person there who spoke their language.

They were astonished to discover that she was a descendant of uncle Bairo, who like Mr Tontaake and Mr Buranibwe, had ran aground on the atoll.

Unable to contact home to tell them he was okay, he stayed and married into the community. Bairo has since died, but his story has raised hopes about others who have been lost at sea.

First of all, of course, let's acknowledge how lucky these two men were. Both islands are mere flyspecks in the vastness of the Pacific Ocean. I'm sure most people who've found themselves in their position have never made landfall, and drowned far out to sea.

On the other hand, if these two men followed the same drift path as their long-lost uncle, how many others have done the same over the years? It might be fascinating to study the DNA of Pacific islanders in various locations, to see where their ancestors may have come from. One might find a 'migration pattern' following oceanic currents from very far away, and of many centuries' duration.

Anyone who is using a GPS should also keep a compass with it, just in case.

Peter, this article doesn't answer all the questions, but it's a start.
http://www.plosgenetics.org/article/info:doi/10.1371/journal.pgen.0040019