One of the best-preserved relics of late-Middle-Ages Christianity in England is to be displayed in its ancient home. The BBC reports:

A 16th Century carved oak tankard has returned to its Somerset roots for the first time in 125 years.

The Glastonbury Grace Cup, which is believed to have once belonged to the abbots of Glastonbury, is featuring in an exhibition at the abbey's museum. 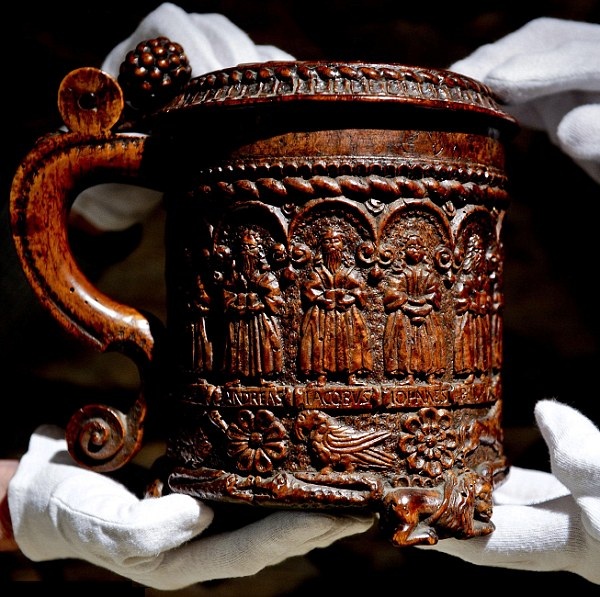 A biblical scene including the 12 apostles and the crucifixion decorates the Grace Cup, which received the name because of its religious associations.

The cup now belongs to the Arundell family in Wiltshire.

A full size replica of the cup, which was cast in silver-gilt during the reign of George IV (1762-1830), will also be on display alongside the original.

The Glastonbury Grace Cup is described by ArtFact as follows:

According to tradition, the so-called 'Glastonbury Cup,' a wood peg tankard of ancient but uncertain date, is said to have been at Glastonbury Abbey, Somerset, prior to the dissolution of the monasteries under Henry VIII. Although The Abbey's valuables were taken away in September 1659 it is not until the time of the English Civil War in the middle of the 17th Century that the 'Cup' is first recorded in the family of the Barons Arundell of Wardour. ... By 1820/21, the year in which Rundell's made the silver-gilt replica [shown below] for the 10th Baron Arundell of Wardour, the 'Cup' had already acquired the status of a romantic relic of the past and its celebrity as such was further emphasised by accounts of it published in 1825 ... 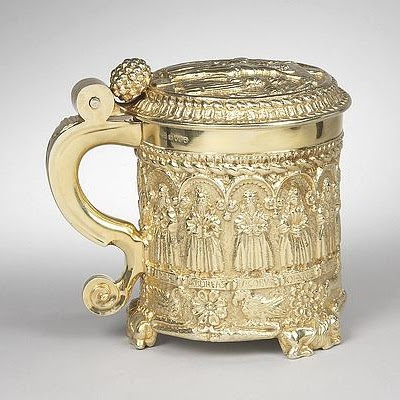 In 1873, John Francis, 12th Baron Arundell of Wardour (1831-1906), nephew of the 10th Baron ... lent the original 'Glastonbury Cup' to be shown at the International Exhibition in Vienna. According to a report at the time, it was described in the catalogue as being '"probably made of the wood of the Glastonbury thorn," but antiquaries assert it to be of "heart of oak," lackered [sic] with a strong varnish. The cup holds two quarts, ale measure; and the liquor it contained was originally divided into equal quantities of half-pints by means of eight pegs, one above another, in the inside of the cup, of which only the four upper ones now remain. It is richly carved. The lid has the Crucifixion, with the Virgin Mary on one side of the cross and St. John on the other. A star is over each of the three heads and a cherub on either see. The knob of the handles consists of a bunch of grapes. Round the cup are carved the twelve Apostles, and the name of each is inscribed on a label at his feet. All have books excepting three, whose emblems are indicated in Scripture: - St. Peter with his key; St. John with the cup; and Judas with a purse. Under the labels is a wreath of birds, beasts, serpents, and full blown flowers. Three lions couchant form the feet on which the cup stands. 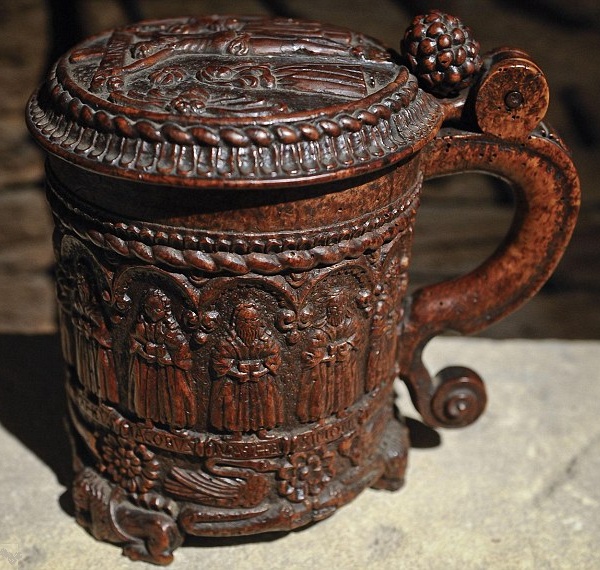 At the general plunder of the Abbey of Glastonbury, when it was dissolved, the cup was rescued by an ancestor of the present Lord Arundell, and it has been carefully preserved ever since. During the civil war of the 17th century, Lady Blanche Arundell, in the absence of her husband with the King, was besieged in Wardour Castle by the rebel army, who demanded the surrender of the family plate. The heroic lady, with only 25 men, defended the castle against a force of 1,300 for nine days, during seven of which it was cannonaded, and two mines were sprung under it. She had to capitulate, but contrived to conceal the cup.

A learned antiquary assigns a very early date to it. It is considered a singular curiosity, "as it illustrates the law of King Edgar [A.D. 943-975], introduced by Dunstan, who attempted to restrain the inebriety of the English (introduced among them by the Danes) by regulating the quantity of liquor to be drunk by one person at one time according to certain pegs, or marks, in the sides of the drinking vessels, which quantity was not to be exceeded under the penalty of severe punishment." The style of the lettering belongs to the time of Egbert; and the arch over the head of each Apostle, with its zigzag indentations, in certainly Saxon. Although the cup is not of "thorn", there is little doubt that it really belonged to Glastonbury, the monastery alleged by tradition to have been founded by Joseph of Arimathea, and considered in the time of Henry II "the foundation and origin of the Christian religious in this island".

It's a fascinating relic of a bygone age.