Shades of Audrey II from Little Shop of Horrors - albeit on a smaller scale (for now!). The Independent reports:

A rat-eating plant has been declared a species previously unknown to science almost seven years after it was first exhibited at the Chelsea Flower Show.

The huge "Queen of Hearts" pitcher, one of the biggest carnivorous plants ever seen – with flowers stretching 2.5 metres across – took pride of place in a display at the world's premier flower show for five years and was seen by hundreds of thousands of visitors.

It helped growers to win four gold medals from the Royal Horticultural Society, but only now has it been recognised as a new species, despite being the most photographed pitcher plant in history.

The plant has a gaping opening through which insects, small mammals and reptiles plunge into a cauldron of hydrochloric acid and enzymes which break down their bodies for the nutrients. The contents are similar to that of the human stomach. 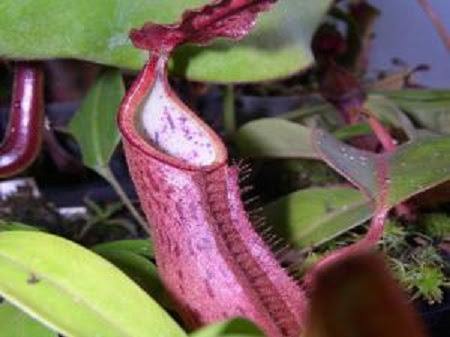 The pitcher is about 40cm [almost 16"] long and 10cm [4"] wide, making it one of the biggest ever found. The flower is even bigger and stretches up to 2.5 metres (about 8ft) long and is thought to be the biggest belonging to a carnivorous plant.

The plant - scientific name Nepenthes Robcantleyi, the first word being its genus, the second its species (derived from the name of its discoverer, Robert Cantley) - is part of the fascinating family of Nepenthes, all carnivorous plants feeding on insects, reptiles and small mammals. There are about 130 different species in the family.

I wonder if we can breed a variety big enough to digest politicians? That might offer a novel solution to our problems in Washington DC . . .

Four inch opening? One could certainly stuff a politician into one a piece at a time... jist sayin'.