A great example of making more with less


I was very interested to read an article in the Daily Mail about an English couple who've refurbished their apartment using reclaimed, recycled and salvaged goods. In the process, they've paid about $4,500 for goods and articles worth well over $50,000 - a bargain in anyone's language!

The couple have turned their hard-won skills into a joint business venture. The article appears to be as much publicity for their business as a news item, but in view of my own background (of which more below), I nevertheless enjoyed it. Here's an excerpt.

In these belt-tightening times, it always helps to shop around to get the best deal.

But one couple have taken that philosophy to the extreme by completely transforming their home simply with reclaimed goods.

Kresse Wesling and James Henrit bought their two-bedroom flat last year when it was little more than a shell.

Trawling charity shops and tips, and searching on websites Gumtree, Freecycle and eBay, the pair managed to create an incredible home from items no-one wanted.

What would have cost about £35,000 using new materials has been done for under £3,000 - albeit with thousands of man-hours.

Their bed is made from scaffold poles, the kitchen is created from reclaimed wood and granite and the tiles in their hallway are made from old firemen’s hoses.

They fashioned granite sideboards in the kitchen, which would usually would cost £500-600, for nothing by sourcing unwanted offcuts.

They also paid nothing for the large ceramic kitchen sink, of which similar styles can fetch anywhere up to £200 new. 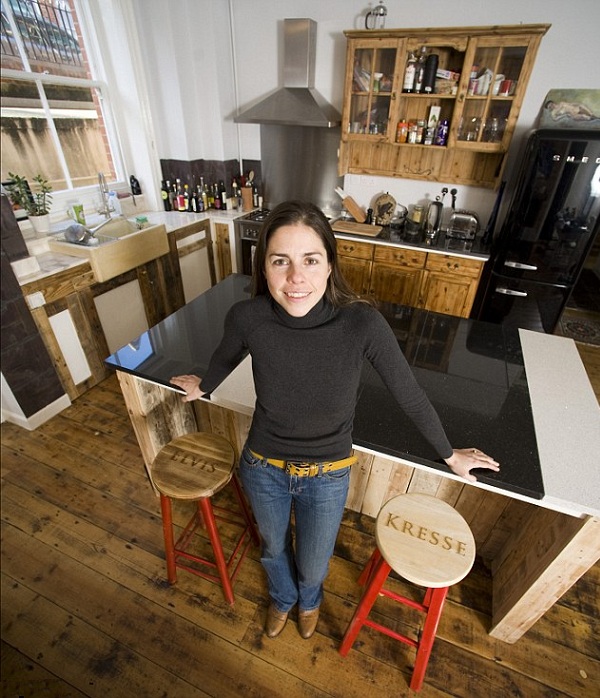 A disused work bench has been turned into a dining table and other furniture including the sink has been found at dumps and transformed into spectacular pieces.

Much of the furniture was made from pallet wood and a painting hanging in their front room was created by a friend.

The couple call their technique 'upcycling' - taking quality goods nobody wants or is selling cheaply and making them like new.

A bathroom mirror was picked up from a firm that makes them and was about to be thrown out because it was not quite perfect.

Cutlery and crockery was found in charity shops and the bathroom tiles were made from reclaimed Welsh slate.

Their TV was a present and their range and fridge were snapped up from websites offering second-hand goods.

The website Freecycle provided them with a Chesterfield sofa and carpets were provided by Kresse’s collection of old Tibetan rugs.

The couple, from Bournemouth, Dorset, have also turned their passion into their living and now run a company - Elvis and Kresse - that sells upcycled goods.

There's more at the link, including many more pictures of their handiwork - inspirational for do-it-yourselfers.

The article reminded me of my parents, who (when I was only a few years old) bought a turn-of-the-century house in Cape Town, South Africa. It was a two-story home in rather dilapidated condition, with about a dozen rooms plus an outbuilding. They paid £6,000 for it (then the equivalent of about US $17,000). Over the next few years, Dad restored the place using his own skills, tools and labor, spending another £6,000 or so in the process. Their total investment was thus the equivalent of about US $34,000. When they sold the place, almost two decades later, it fetched the equivalent of about $55,000 - not a bad return on their investment, for those days.

As a youngster, I 'helped' Dad by handing him tools, nails and screws, and watching as he worked on various and sundry repair and restoration projects. I learned a lot from his example, and later used what he taught me to renovate an old, dilapidated 2,000-square-foot four-bedroom apartment in Johannesburg. I'd been able to buy it very cheaply due to its run-down condition, and saved a lot of money during renovations by not using professional labor or services, and avoiding buying new components. I sourced many things I needed (e.g. carpet tiles, wall light fittings, etc.) from dumps or outlets for used building components. It's amazing what one can accomplish with a little sweat, elbow-grease and careful scrounging.

I wish more couples would do that together in these difficult times. Not only would they save a lot of money, the shared labor might (should!) help to draw them closer together. That's an all-round win in my book!

I grew up 'helping' my father renovate an old farmhouse - and like you, learning invaluable lessons and skills. I did the same (on a smaller scale) with our daughters, who are now willing to take on tasks like replacing a dimmer switch or rebuilding a bathroom valve set or laying a wood floor, etc. in their own homes.