So the US government announced today that the unemployment rate fell to 8.3 per cent, its lowest since February 2009.

They're trying to deceive you. They've been trying to do so about the unemployment rate (and many other vital economic statistics) for decades, as we've pointed out before.

Here's how it works. First, government departments set up a series of conditions, a 'framework' if you will, within which they prepare their statistics. Then, they perform their data analysis within the restrictions of that framework, and voila! Out pops the result they want you to accept. They want you to blindly trust them to tell you the truth. The fact that it's only true if you accept their (flawed) framework, and fails miserably if you look at the wider picture, is something they'd rather you didn't know.

Unfortunately for them, too many people do know about such things - and that's why today's unemployment figures were debunked almost before the ink was dry on the press release. Zero Hedge pinned down one of the most important factors.

A month ago, we joked when we said that for Obama to get the unemployment rate to negative by election time, all he has to do is to crush the labor force participation rate to about 55%. Looks like the good folks at the BLS heard us: it appears that the people not in the labor force exploded by an unprecedented record 1.2 million. No, that's not a typo: 1.2 million people dropped out of the labor force in one month! So as the labor force increased from 153.9 million to 154.4 million, the non institutional population increased by 242.3 million meaning, those not in the labor force surged from 86.7 million to 87.9 million. Which means that the civilian labor force tumbled to a fresh 30 year low of 63.7% as the BLS is seriously planning on eliminating nearly half of the available labor pool from the unemployment calculation.

This is the largest absolute jump in 'Persons Not In Labor Force' on record...and biggest percentage jump in 30 years. 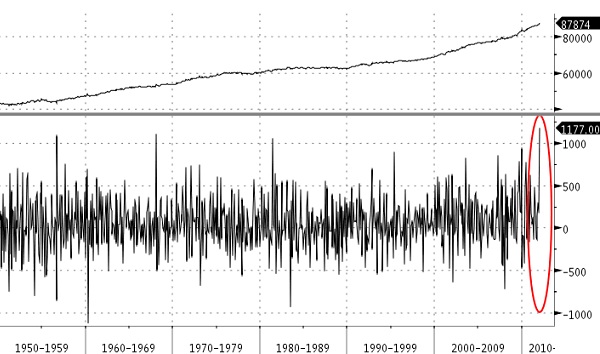 There's more at the link, including more graphs of the data. Important reading.

Isn't mathematics wonderful? Remove a great big chunk of people from the dataset, and calculations using the remainder of the dataset suddenly produce much better results! If you don't bother to explicitly tell people what you did with the numbers underlying your calculations, why, you're not actually lying to them . . . you're just hoping they won't notice.

The good people at Casey Research have identified another part of the problem.

Workers continue to drop out of the job market. In fact, the labor participation rate continues moving downward in an ugly trend. There hasn’t even been a stabilization period in this important labor indicator. 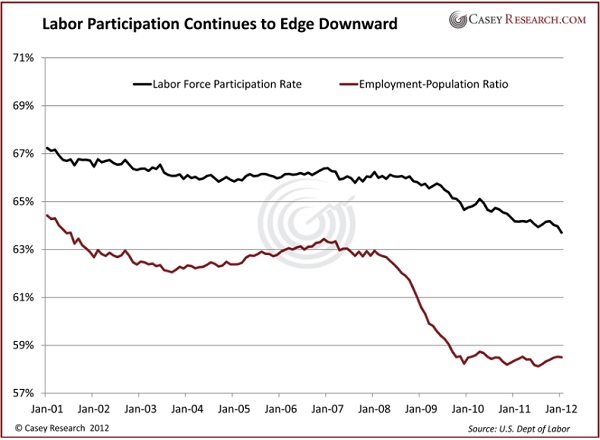 While the employment-to-population rate has at least flatlined, labor participation remains a major problem. Hidden in these numbers is a shadow inventory of unemployment. Whether it’s students who have gone back to school or those who have simply stopped looking for work, there is a long list of people who will eventually start looking for jobs again. Especially if the unemployment rate continues to fall, more people will enter back into the job market. As a result, the unemployment numbers may stagnate from here.

Again, there's more at the link. As usual, Casey Research has done an excellent job of presenting the reality behind the numbers. If you're not already subscribed to their free e-newsletter, I recommend it to you.

Finally, let's acknowledge that the latest unemployment figures do indicate an improvement; but it's an improvement built upon a foundation of several years of bad news. It's a bit like someone whose investments have lost one per cent of their value every month for three years or more. Today, with the compounding effect of that loss, they're worth less than two-thirds of their value before his run of losses started. Now his accountant rushes up to him, beaming, and exclaims, "Good news! Your bad luck has turned! Your investments gained half a per cent last month!" Big deal. Sure, he's up half a per cent . . . but he'll have to make up sixty times that, or more, before he's even back to where he started - let alone improves on that starting-point!

You can expect our politicians, and the bureaucrats who answer to them, to try stunts like this throughout this election year. They'll 'massage' statistics to present reality in the most favorable light, while ignoring anything and everything that detracts from the underlying message that you should vote for them, because Things. Are. Improving! They're not, actually . . . but they don't want you to know that. Don't believe a word they say.

Remember the immortal phrase: "There are lies, damned lies, and statistics". Politicians use them all!

Politicians will always pull shenanigans like that. The real problem is that reporters will not report it like they are supposed to.

Hopefully, with the internet, more people will see through that scheme. But I doubt it.

I was impressed at how quickly people caught the fudging. Less than an hour after the report came out and some of the TV financial people were calling shenanigans. I suspect the folks at Treasury and the federal employment office were thanking their deity of choice for the Komen Foundation furor because it distracted so many talking heads from the employment news.

Since no president has ever been re-elected with an unemployment rate above 8%, it's an easy target. You can bet the rate will be below 8% by then. Doesn't even need go as far as Zerohedge jokes.