The Indonesian Navy ordered four high-speed trimaran missile craft, the first of which, Klewang, was launched at the end of August.  Here's a video clip of its launching.

Its design was clearly influenced by that of one of the US Littoral Combat Ship prototypes, USS Independence (shown below - image courtesy of Wikipedia), although the latter vessel is much larger. 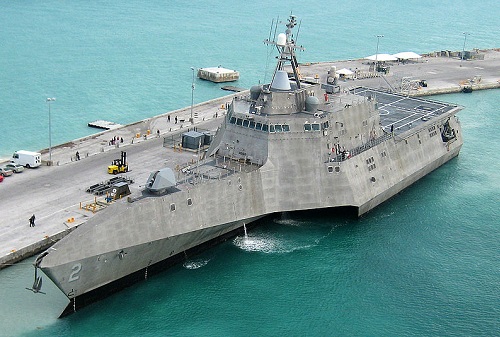 Unfortunately, the shipyard was still working on fitting out the vessel when it caught fire at its moorings last Friday, before it could be handed over to the Indonesian Navy.  Here's a video of the ship's destruction.

I bet there are more than a few red faces at that shipyard right now!  I don't think the ship's going anywhere any more - except to the scrapyard . . .

If it is that flammable in port, it makes you wonder how it would survive combat.

I wonder what percentage of the AUD500 MILLION in economic aid given by Australia to Indonesia for education and building of schools, went into this .....'school'?.

That's a composite fire - I'm prettys sure the thing is fiberglass, not aluminum.

So they can afford a warship but not a fire-fighting service at, or near, the shipyard....... Interesting priorities ?

I love the look of wave-piercing hullforms.

They sure launch ships in a... strange... fashion.

And that ship are toast, literally and figuratively. And they were having to lug fire hoses from the shoreside of the pier? Really?