Art, and paying for it


A report in the Daily Mail has got me thinking about something that's been a nagging irritation to me for some years.

The campaign to save a Titian masterpiece was given a £10million boost today.

The National Heritage Memorial Fund, set up as Britain's fund of last resort for saving treasures at risk, made the award to help stop the potential loss of the painting of Diana And Actaeon overseas.

In an indication of the importance of the work, the sum amounts to the fund's entire annual government grant.

The 7th Duke of Sutherland owns the 16th century painting which has been on public loan to the National Galleries of Scotland in Edinburgh.

He now wants to sell and has offered it at a below-market price of £50 million [about $73.6 million]. The Scottish galleries have joined with the National Gallery in London to raise the funds.

The painting is at the National Gallery until 14 December. 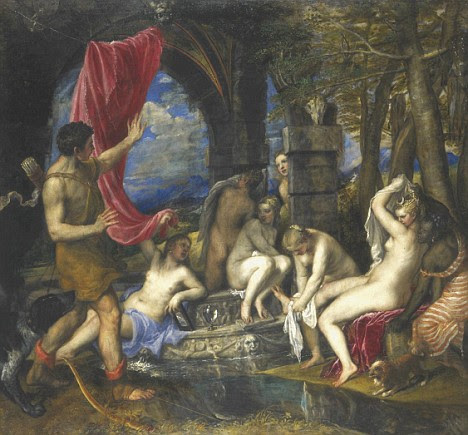 Artist Bridget Riley, 77, was today to become the latest to pay homage to the Titian, after Lucian Freud, Peter Blake, Paula Rego, Tracey Emin and Michael Craig-Martin joined in support.

Jenny Abramsky, who recently took over as chairwoman of the heritage fund, said: 'It was an extraordinary decision for us financially, but it's as important as ever to protect our cultural heritage.'

The Titian, based on Ovid's Metamorphoses, is part of the Bridgewater Collection, which the duke has on loan. He has promised the rest can stay on public view for at least 21 years as long as Diana And Actaeon is purchased.

Ms Abramsky said the continued loan of what is the greatest private collection of Old Masters on loan to any public gallery in the world also contributed to the fund's decision.

Nicholas Penny, director of the National Gallery, said that the galleries were 'enormously grateful'.

The galleries, which would share the work, have until the end of the year to raise the remaining millions needed.

I can understand the enthusiasm of the artists and conservators involved in this effort . . . but is any painting worth up to seventy-four million dollars in taxpayers' money? Can the expenditure of public funds on this sort of thing be justified?

For myself, I'd say no. I think that if individuals are attracted to a particular style of art, from the Classical masters to modern avant-garde stuff, let them support that field of art out of their own resources, and arrange fund-raising events to supplement their own donations. I resent my taxes being diverted into artworks when there are other pressing needs that are properly the province of government: defense, foreign relations, and so on. I happen to like Titian's work, but if this painting were the subject of a similar effort in the USA, I don't see why my dollars should be diverted from important needs to something that won't make a bit of difference to the national good if it's here or in another country.

Quite frankly, I'd like to see all government subsidies, allocations and budgets for the arts (any kind of art) completely abolished. Let the community decide what forms of art it wants to support, and do so through ticket sales, donations and fund-raisers. Leave taxpayers' money out of the equation altogether.

What say you, readers?

A Titian may well be worth restoring, but not with public money.

Wealth redistribution in any form is morally wrong.

For me it is not so simple. A lot of Art is about challenging people's perceptions and being controversial. If we only supported what we like, we'd never have to be challenged.

Also, some art is such that it has helped to shape and define our culture and society, and it's value is significant, both as art, but also as history, and can serve the public good through education (there is a big difference between seeing a photo of a piece, and going to the Louvre and seeing it in person).

That being said, I do support public funds being used to provide a public forum for artists to present their work, where the public can decide through admission fees or comment cards if the art is worthy. I do not agree with public funds being used to purchase art without such a purchase being put forward to the public first. I've seen way too many expensive art installations that are just ugly and were placed without any public input.

I also support the use of public funds to preserve historic art, but only AFTER those parties who want such art preserved have expended all reasonable fund raising efforts, and if time is an issue, I could see the use of a taxpayer loan to secure funding quickly.

If they were smart, they would raise a cool million and make an archival copy of all the paintings to hang in public. Let the owner sell them and the average museum goer would not know the difference.
Yeah it is beautiful, yes it is art and historical. but the trash in the Andy Warhol Museum here in Pittsburgh is historical and art. I don't need to pay for it as a taxpayer, as I paid admission to the museum once to see it. If it is worth preserving I will go back or donate more.

They need to stop seeing the taxpayer as an endless source of funding.