I'm very excited to read about a real medical breakthrough. For the first time, a patient has had one of her organs (well, in this case, more a body part than an organ) grown from her own bone-marrow stem cells, and transplanted into her. This is a huge advance, and hopefully the harbinger of things to come.

A mother of two has become the first person in the world to undergo a whole organ transplant grown from her own stem cells.

From being virtually bedridden after her windpipe became blocked, 30-year-old Claudia Castillo, above, is now able to resume the active life she once had. 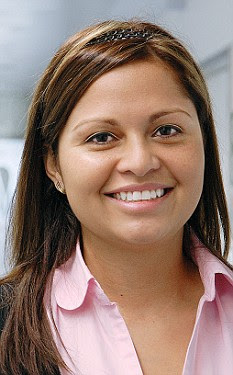 The breakthrough is thanks to the pioneering work of British scientists, who are hailing a new dawn in transplant surgery which they believe could revolutionise the lives of millions.

They have won an international race to be the first to use adult stem cells to grow an entire organ and implant it successfully.

They believe the technique could be extended to allow surgeons to replace organs such as the heart and the lung, and are confident it will be the normal way of carrying out transplants in just two decades.

And because the technique makes use of adult stem cells donated by the patient, it sidesteps the ethical issues around the use of embryonic stem cells.

One of the researchers, Martin Birchall, professor of surgery at the University of Bristol, said: ‘What we’re seeing today is just the beginning.

'I reckon in 20 years’ time it will be the commonest operation surgeons will be doing. It will completely transform the way we think about surgery, health and disease.

‘We believe this success has proved that we are on the verge of a new age in surgical care.’

The new technique ends the need for immuno-suppressant drugs. It uses part of a donated organ as a skeleton to grow stem cells on, but because these parts can be stored for longer than full organs, the method could save many more people and have an impact on lengthy waiting lists.

Single mother Miss Castillo had TB which had almost blocked one of her bronchi, the twin tubes leading from the windpipe to the lungs, meaning she was permanently breathless. 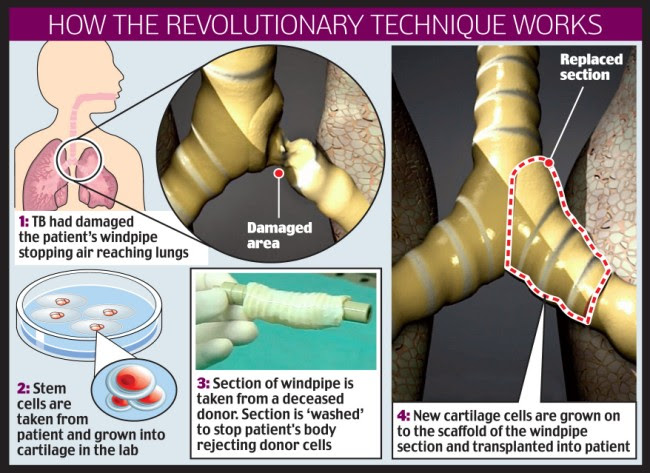 Part of a windpipe from a 51-year-old woman who had died from a brain haemorrhage was used in the procedure.

The whole windpipe could not simply be transplanted as it would have been rejected by the patient’s immune system.

Instead, it was repeatedly ‘washed’ to remove all the dead person’s cells, leaving only a collagen ‘scaffold’.

Then stem cells were taken from Miss Castillo’s bone marrow. Stem cells can be prompted to grow into almost any type of cell, and in theory can be used to reconstruct entire organs.

The stem cells were sent to Britain and grown in a lab at the University of Bristol to produce around six million cartilage cells - the material of trachea walls.

The cartilage cells were taken to Milan where, using a machine developed for the purpose, they were grown on to the trachea skeleton, effectively making a windpipe in the lab. 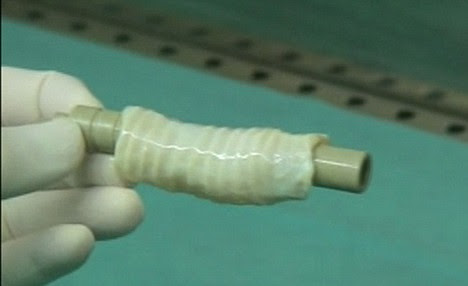 The windpipe was cut to the right length and bent into shape, before being grafted into Miss Castillo in June by Professor Paolo Macchiarini of Barcelona University.

She is now able to walk up two flights of stairs, walk 500 yards without stopping, and care for her two children. Her body is showing no signs of rejecting the organ.

The remarkable results have been hailed as providing crucial new evidence that adult stem cells can offer genuine solutions to serious illnesses.

The campaigners will use the latest breakthrough to bolster their arguments that scientists should look only at adult stem cells.

Another of the researchers, Anthony Hollander, professor of tissue engineering at the University of Bristol, said: ‘This successful treatment manifestly demonstrates the potential of adult stem cells to save lives.

‘This is an example of stem cell science becoming stem cell medicine.’

Absolutely! I'm totally opposed to the use of stem cells from embryos, because it means the deliberate killing of a human being to 'harvest' them: but using a person's own stem cells, which we all carry in our bone marrow, is entirely another matter. I hope and pray that this pioneering work continues, and expands.

Congratulations to the doctors, technicians, hospitals and laboratories concerned.

Adult stem cells have long had enormously more promise than embryonic. There's actually a list of successful treatments with them:
http://www.stemcellresearch.org/
I don't recall exactly where it is, but it's in there somewhere.

If they were really interested in helping people, they'd be pouring the billions in to adult stem cells. While embryonic cells can be useful for some research, they haven't been able to be used for anything useful. That and you'd still need the anti-rejection drugs with someone else's stem cells.