Today's Doofus award is conferred collectively upon the team of police in Scotland responsible for this fiasco.

As Lulu Matheson was warming herself by the fire at her remote rural cottage, police and sniffer dogs burst through the door.

The officers were sure that the house was a cannabis factory – and refused to accept that her pot plants weren’t . . . well, pot plants. 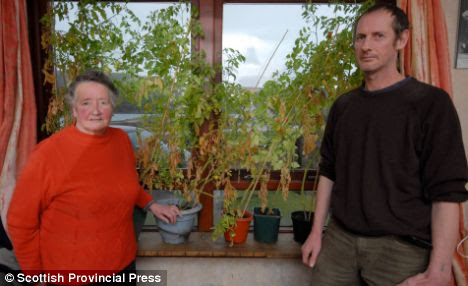 Despite protestations by the 79-year-old widow that they were looking at her family’s prized tomato crop, the officers insisted on sending samples of the plants to be analysed.

Mrs Matheson, who has lived in the cottage for 53 years, said: ‘I got a terrible fright and I couldn’t understand what they were doing here because I knew we had nothing more than tomatoes in the window. I don’t know what the neighbours must be thinking.’

The high-profile police operation took place in the picturesque village of Shieldaig in the Highlands of Scotland a week ago. 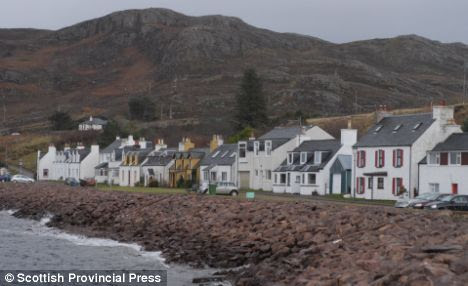 Mrs Matheson’s 47-year-old son Gus, a former driver, was looking out of the window when he spotted police cars screeching to a halt .

He said: ‘I wondered what on earth was going on. I opened the door and they more or less barged past, saying that I was growing cannabis on the windowsills.

‘I started laughing because I knew they were tomato plants but it wasn’t so funny when they frisked me and then started tearing the house apart.’

Mr Matheson was kept under guard in the bedroom while officers searched the furniture and looked under the mattress. He said that the police impounded the family’s pet dogs.

‘They even “arrested” Zac, our black labrador, and Moby, our Jack Russell, putting them in the back of one of the cop cars,’ Mr Matheson added. 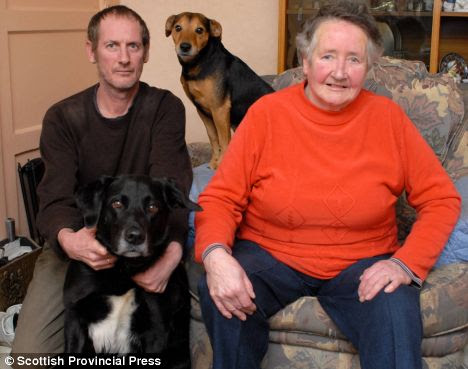 ‘And I just couldn’t believe it when they brought sniffer dogs all the way from Alness, which is about two hours away.

‘My 26-year-old nephew Stephen – who hardly even smokes a cigarette, never mind cannabis – lives with his girlfriend in a caravan next door and they went over and searched there too, after handcuffing him. It was a terrible carry-on.’

He added: ‘Despite leaving with their tails between their legs, the police didn’t even apologise.’

As a keen gardener, Mr Matheson grows tomatoes in the south-facing bedroom window to catch the sun.

He said: ‘We always enjoy having a juicy home-grown tomato with our dinner and I’ve had fine crops this year.’ Mr Matheson is now making a formal complaint to Northern Constabulary, calling the raid a waste of taxpayers’ money.

Indeed. On the other hand, I'd be tempted to say that it was pointless, but fruitful . . .

They're lucky. In the U.S. lately they could have easily had their dogs shot rather than "arrested".

Egale, no lie- seems shooting the dog is SOP these days.
The thing that really really pisses me off, is the absolute refusal of the police to just say, "I'm sorry, we made a mistake". For about 95% of botched raids, etc, a simple apology and repair of the damage would be enough to restore confidence in the system- instead, we get stonewalling even in the most egregious cases, which , to me, is a reflection of the extreme arrogance of the modern police force. Mr. Peel's principles are well and truly tossed in the garbage pail.

That's what happens when the police forget they are civilians not some super-duper paramilitary wannabees. I shoot with some at our gun club and will not trust any one with my back turned.

It's a sad commentary on our police when my first thought was that they are indeed lucky the dogs weren't shot and when I went to make the comment, I find that I was beaten to it, not once, but twice.