Be thankful for modern dentistry!


I'm nervously clutching my jaw and hoping I don't have any bad dreams over a recently-discovered textbook from the 18th century. 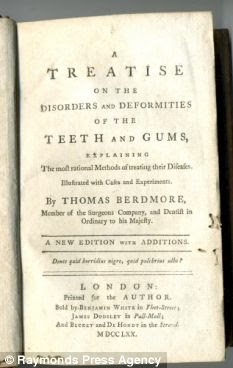 The book, 'A Treatise on the Disorders and Deformities of the Teeth and Gums and the Most Rational Methods of Treating Them', was written in 1770 by Thomas Berdmore, 'Operator to the Teeth' of King George III of Britain. His descriptions of early dental techniques are agonizingly horrible!

A copy of the book, bound in its original calfskin covers, was recently discovered at a valuation day by auctioneer Charles Hanson and will be sold at auction at the Mackworth Hotel, near Derby, on November 26. It is expected to fetch around £300.

Mr Hanson said: 'Its true worth is in the snapshot it provides of medicine at that time.
' We might complain that we have it bad now in certain ways, but being a dental patient back then doesn't really bear thinking about.'

On the importance of dental care: "A foulness of the teeth is by some people as little regarded as it is easily removed; but with the fair sex, with polite and elegant part of the world, it is looked upon as a certain mark of nastiness and sloth."

On the perils of sugar: "People who eat most sweetmeats are subject to disorders. Peasants suffer less in this way, unlike those of rank and opulence."

On tooth straightening: "Pass gold wire from the neighbouring teeth on either side, in such a manner as to press upon what stands out of the line." Alternatively: "Break the teeth into order by means of a strong pair of crooked pliers."

On tooth care: "Cracking nuts is hurtful to teeth, as is the custom young girls have for cutting sewing thread with their teeth."

On the risks of lifting furniture: "The boyish custom of carrying a table or chair in the mouth is as dangerous as it is absurd."

On toothache: "Toothache arising from alternate hot and cold liquors is often felt by delicate women who live a recluse life and admit to filing too freely."

On a botched extraction: "A young woman aged 23 went to a barber dentist to have the left molaris tooth of the upper jaw on the right side taken out. On the second attempt he brought away the affected tooth together with a piece of jawbone as big as a walnut and three neighbouring molars."

I blame my aversion to dentists on one I had in college who thought Novocaine was only for sissies and enemies of the Reich.

So, I have always hated going to the dentist, even though I've been assured countless times that they are kinder and gentler now, big cuddly teddy bears, and that the days of whirring metal drill bits spraying bloody enamel chips around the room are a thing of the past.

I'll pass either way, I brush, I floss, I haven't had a cavity in 20 years. Maybe I can avoid it.

I will never complain about going to the dentist again.