Reflections on Rosa Parks, and on 'group think'


On December 1st, 1955, Rosa Parks lit the spark to the explosion in the US civil rights movement by refusing to give up her seat on a bus in Montgomery, Alabama, to a white passenger. 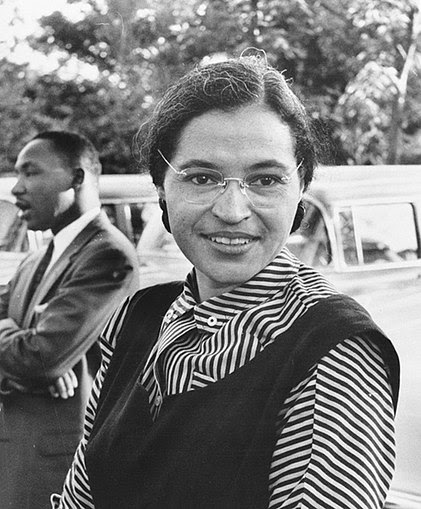 Her story is well-known enough (and described at the link above) that I won't go into it here. However, I'd like to take the opportunity offered by this anniversary to reflect on racism and intolerance in all its forms. They're examples of 'group-think', judging an individual by the group(s) to which he or she belongs.

I've seen the worst of racism, in South Africa, where I was born and grew up. I was blessed in my parents, who, being from England, weren't brought up with any consciousness of racial superiority. (National superiority, perhaps . . . but not race!) They brought me up with the awareness that it's never the group that matters - only the individual. One can't say that just because a certain proportion of people from a given ethnic background, or nationality, or race, or religion, or any other 'group' distinction, behave in a certain way, that everyone from that 'group' will do the same.

I found this again in my work with the victims of violence during the troubled years from 1976-1994, when a low-key, endless cycle of civil unrest (verging at times on open civil war) finally brought an end to the evil that was apartheid. There were people of all races whom I regarded as utterly beyond the limits of what I would classify as humanity. I'd not have shed a single tear for them if they'd been burned alive in front of me, and wouldn't so much have peed on the flames to help them. They were evil personified. Some were out-and-out terrorists, masquerading as 'liberation fighters', but in reality terrorizing and manipulating and extorting and brutalizing those under their power. Others were police officers, nominally there to 'protect and serve', but in reality using torture, intimidation and brutality to get the information they needed, and not above murdering suspects in cold blood if they thought they were guilty, but didn't have enough evidence to convict them in court. Still others were politicians, who utterly refused to consider those affected by their decisions as human beings, regarding them merely as numbers or digits or files in a bureaucratic system, to be shuffled about at their whim. Soulless demons and monsters, all of them.

I learned, too, that the slope between genuine concern for one's fellow citizens, and becoming a criminal or even a terrorist, is a very slippery one. I knew some folks who went to Afghanistan in the 1980's to fight with the Mujahideen against the Soviet invaders of that country. When they returned to South Africa, they were on fire with zeal for their faith, Islam, and to reform the evils in society. They began by attempting to counter the gangs that plagued their neighborhoods, forming an organization that became known as PAGAD - People Against Gangsterism And Drugs. When the police couldn't (or wouldn't) act against gangsters, these folks would give them a public warning to reform or get out of town. If they didn't, they took direct action against them, up to and including killing them.

Of course, the inevitable happened. Having successfully reduced the gangster element in their own neighborhoods, PAGAD began expanding into others - whether the residents there wanted it or not. Their members planted bombs, shot at gangsters, and eventually moved into a form of gangsterism themselves. Instead of removing the crime problem, they simply evolved into another form of it. In a sense, that's precisely how Al Qaeda developed into the soulless, Godless monster it's become. Its leaders began a legitimate struggle against foreign aggression in Afghanistan, including the persecution of Muslims. However, they rapidly became radicalized, to the extent that if anyone did not accept Islam as the only true path, and/or follow the fundamentalist version of the Islamic moral code, he or she was considered to have 'rejected God', and therefore to be as guilty of sin as any invader. The result we all know.

Christians can be just as bad, of course. Witness the massacres of indigenous people during the colonial period, perpetrated by nations ostensibly wanting to colonize their lands under the cloak of 'bringing salvation to the heathen'. Witness the religious wars around the globe. Witness the Troubles in Northern Ireland, all in the name of Christian denominations and the 'Prince of Peace'. Witness the abomination that is the Westboro Baptist Church. I could go on and on. The list is endless.

All of these distinctions are fundamentally meaningless, of course, when it comes down to bedrock. A person is, or is not, a good, honest, moral and upright individual. If they are, I don't care what color their skin is, or what language they speak, or what they believe, or anything else. I'm prepared to accept them as my equal and my friend. If someone's a bad person at root, again, I don't care about any other aspect of their life. I don't want them around me.

The group is meaningless in making that distinction. I've known very good Muslims (including some to whom I literally owe my life). I've known 'bad' Muslims, who would kill, bomb and maim in the pursuit of what they considered important. I've known Christians who could be distinguished in the same way. I've known good and bad Blacks, Whites, and a bunch of other races. I've know good and bad English-speakers, French-speakers, Zulu-speakers, Xhosa-speakers, and so on. In every case, the faith, ethnic background, language or other attributes of the individuals concerned mattered not one whit.

Friends, if anyone tries to tell you that someone is (or is not) good (or bad), harmless (or dangerous), positive (or negative), or whatever, solely on the basis of his or her group identity - however that group is defined - then you may be sure they're lying to you.

The only thing that counts, in the end, is the individual.

A society comprised of primarily good individuals will stand. A society comprised of primarily bad individuals will fall. All societies - and each of us, as individuals - are a mixture of good and bad. It's our task in life to emphasize and promote the good, in ourselves and in our society, and to minimize the bad. To the extent that each of us works towards that goal, we may count ourselves more or less 'good'. If we do nothing to promote that goal, guess where that leaves us? On the wrong side of the scales.

Doesn't hurt to be reminded of the constant truths. Having been raised in the south of the US I was taught to judge groups not the individual. Thank goodness I leaned better as I got older. As the man from Galilee said, "Judge not, lest YE be judged"......

I have learned the truth in what you have said here. I was raised in a rather racist home and era. My wife and I are teaching our daughters not to judge by race or other wise. But to judge by actions
and deeds.