Should we bail out the US auto industry?


My online pal Larry Correia asks this question on his blog. His answer, in brief:

Let me put it this way. When you have a company that is contractually obligated to pay $75 an hour to the guy who SWEEPS THE FLOOR… you deserve to FAIL.

I’m sick and tired of this crap.

The argument for strategic industry is one thing, but it is fundamentally flawed. The days of Detroit flipping over and turning out Sherman tanks are gone. If the auto industry tried to tool up for wartime production our new tank would be the M2 NADER, which blows for combat but gets 32 miles on the highway, and three Iranians and an angry goat driving a ‘75 Toyota pickup truck (that’s still running) could burn a fleet of them.

Screw it. The unions raped the auto industry. It is time for a reboot.

(There's more of his superb and somewhat profane rant at the link.)

I've been reading articles about the proposed bailout of the US auto industry for some days now, and I'm getting more and more fed up - because very few of them are telling the truth about precisely why this industry is in such trouble.

In a nutshell, it's the unions.

Please understand, I'm not anti-union as such. I've been a member of a trade union, and I think they have a legitimate and valuable role to play in providing a counter to the sometimes-abused authority of employers. When workers are abused by 'the system', they need a powerful ally. However, when unions gain so much power as to wield an unhealthy and detrimental influence over an entire industry, things have gotten out of hand.

Mark Schill puts it very well in an article on the Web site New Geography. He never mentions unions as such: but if you look at the concentration of union membership in the auto industry, the 'problem states' he identifies are all solidly union territory.

The economies of Michigan, Alabama, Ohio, Indiana, and Missouri are the most highly dependent on auto manufacturing. While Michigan and Ohio have lost more than 43,000 auto jobs since 2001, Indiana actually added almost 3000 over the same time period and Alabama more than doubled its auto industry, adding 8600 jobs.

In fact, the rest of the nation aside from Ohio held about the same number of automobile manufacturing jobs in 2001 as the state of Michigan. While Michigan has shed more than 35% of its employment in the industry, the rest of the country actually held its own over the same period.

Looking at average annual pay, the small vehicle sector in Minnesota leads the way - jobs there average over $100,000. At well over $90k per job in Michigan, you can see what the rapid decline in automaking has contributed to the evisceration of the state economy. In the top four highest paying states - where workers make more than $90,000 on average per year - automakers have cut more than one third of the jobs in those states since 2001.

So while the failures of major automakers would send ripples throughout the North American industrial economy, what we are really contemplating here is doling out support for the declining states of Michigan and Ohio.

Mr. Schill posts some very interesting graphs with his article. This one (click to enlarge) shows the 'auto location quotient', or concentration of vehicle manufacturing, by state: 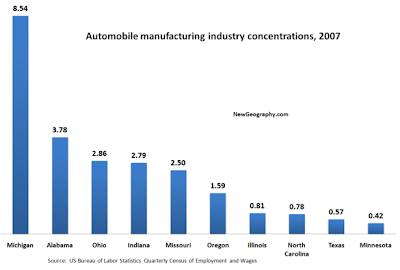 And this one shows the annual salaries of auto industry workers, by state: 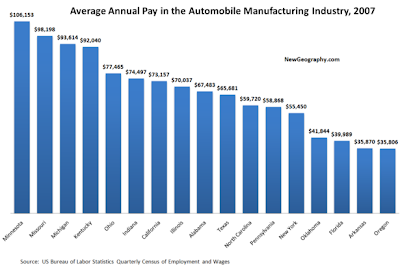 You can see immediately that the real problem is the colossal overhead costs absorbed by the Big Three automakers in their union-dominated traditional manufacturing locations. Automakers (mainly Japanese) who've relocated their plants to States with lower wage levels are paying only a third to half as much as the Big Three in personnel overhead costs. Autos produced overseas usually have even lower costs (when denominated in dollars).

So, the obvious answer to saving the auto industry is to break the union stranglehold over its wage policies. However, the unions are a very powerful pressure group in the Democratic Party, which now dominates our legislative and executive branches of government: so don't look for this to happen anytime soon. Instead, predictably, the Democratic Party is lobbying for you and I, the taxpayer, to throw billions of dollars in aid to the auto industry - where most of it will flow to the members of those same unions, and will only perpetuate the real problem.

Makes you sick, doesn't it?

I happen to be an employee of a Tier 2/Tier 3 supplier. We sell parts to Ford, Chrysler, and a few to GM. I want the bailout to STOP. I agree, that the unions are a large part of the reason the bailout is "needed." Unfortunately, with the Democrats pushing for the elimination of secret ballots in union elections, allowing a simple petition to suffice, the situation is likely to get worse before it gets better.

No Bail Out. It is time for the auto makers to sink or swim.

It is a criminal enterprise masquerading as public policy. These "bailouts" are stealing from the public, and being handed to greedy bastards. We do not even know where the money is going. Bloomberg has a freedom of information act suit going right now against the Fed because they will not release the recipients of TWO TRILLION dollars of "bailout" money. People, we are being robbed. ROBBED. If anyone thinks this money is going to help out middle America , I have a bridge to sell you. This money is going to go right into the pockets of the rotten rat bastard scum who created the problem in the first place. Estimates on the cost of the "Bailout to date are FIVE TRILLION dollars.
That's 5,000,000,000,000 -That is $16,000 stolen from every man woman and child in the country.