This year marks the 60th anniversary of Scrabble - one of my favorite board games, in somewhat modified form. According to the Hasbro Web site:

The story of SCRABBLE is a classic example of American innovation and perseverance.

During the Great Depression, an out-of-work architect named Alfred Mosher Butts decided to invent a board game. He did some market research and concluded that games fall into three categories: number games, such as dice and bingo; move games, such as chess and checkers; and word games, such as anagrams. Butts wanted to create a game that combined the vocabulary skills of crossword puzzles and anagrams, with the additional element of chance. The game was originally named Lexico, but Butts eventually decided to call the game "Criss-Cross Words."

Butts studied the front page of The New York Times to calculate how often each of the 26 letters of the English language was used. He discovered that vowels appear far more often than consonants, with E being the most frequently used vowel. After figuring out frequency of use, Butts assigned different point values to each letter and decided how many of each letter would be included in the game. The letter S posed a problem. While it's frequently used, Butts decided to include only four S's in the game, hoping to limit the use of plurals. After all, he didn't want the game to be too easy! Butts got it just right. His basic cryptographic analysis of our language and his original tile distribution have remained valid for almost three generations and for billions of games played. The boards for the first Criss-Cross Words game were hand drawn with his architectural drafting equipment, reproduced by blueprinting and pasted on folding checkerboards. The tiles were similarly hand-lettered, then glued to quarter-inch balsa and cut to match the squares on the board.

Butts' first attempts to sell his game to established game manufacturers were failures, but he didn't give up. He and his partner, game-loving entrepreneur James Brunot, refined the rules and design of the game, and renamed it SCRABBLE. The name, which means "to grope frantically," was trademarked in 1948. The first SCRABBLE "factory" was an abandoned schoolhouse in Dodgington, Connecticut, where Brunot and friends turned out 12 games an hour. The letters were stamped on wooden tiles one at a time. Later, boards, boxes and tiles were made elsewhere and sent to the factory for assembly and shipping. The first four years were a struggle. In 1949, the Brunot's made 2,400 sets and lost $450. As so often happens in the game business, SCRABBLE plugged along, gaining slow but steady popularity among a comparative handful of consumers. Then in the early 1950s, as legend has it, the president of Macy's discovered the game on vacation, and ordered some for his store. Within a year, everyone "had to have one," and SCRABBLE sets were being rationed to stores around the country.

Today, according to one article, something like 30,000 games of Scrabble are begun every hour.

A novel celebration of the anniversary was devised by Nicole Angelides and Ramsey Kent, who played Scrabble while sky-diving, using a reinforced board and adhesive tiles. 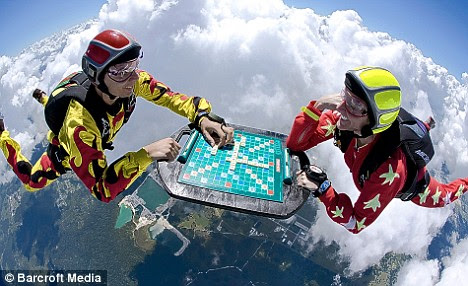 There's a special 60th anniversary edition of the game, which I haven't looked at yet, but which seems interesting. I might get myself a Christmas present.

My favorite way to play Scrabble is to discard the board and use the tiles alone. This version of the game was called 'Anagrab' by the folks in Mensa South Africa, where I learned it. The rules are simple. You discard the blank pieces, and turn all the others face-down on the table or carpet between the players. Each player in turn takes one piece and turns it face-up. As soon as a player recognizes a word among the face-up letters, he or she shouts something appropriate (frequently profane), takes the letters, and forms the word in front of their place. Since more than one person may shout at once, speed is vital - and so is volume!

Now things get interesting. You see, you're allowed to 'grab' someone else's word, provided you do two things. You have to add at least one letter to it; and you have to rearrange the order or position of the existing letters, to make a different word. In other words, you can't make a plural of 'dog' by adding an 's'. However, if you rearrange the letters to produce 'god', and then add an 's' to make it plural, that's legal. You could add the letter 'a' to the word 'got' to produce 'goat', which is a new word with an additional letter. Even though the 'g' and 'o' are in the same positions, the 't' has been displaced from the third to the fourth position, so it's valid. You could then add an 's' and rearrange the letters to produce 'togas'.

You can also 'grab' two or more words, from the same or different players, and combine them to form a new word: or grab another player's word and combine it with one or more of your own. The same rules apply: you have to rearrange the order or position of the existing letters in each word, and add at least one letter. For example, you couldn't take 'door' and 'post', add an 's', and produce 'doorposts'. The order and position of the letters in the previous word 'door' haven't changed, so that's illegal. However, you could take 'fed' and 'ail', add an 'l', and produce 'flailed'. Even though the letters of 'ail' are in the same order, they've changed position from 1-2-3 in the original word to 3-4-5 in the new word, so it's valid.

Only one player may 'grab' someone else's word at a time. As soon as he or she is done with setting up the new word, another player may make a grab of their own. It's particularly galling when one grabs an opponent's word, only to have another player immediately grab it in their turn, because they've seen a word you hadn't considered when grabbing it yourself! As the game progresses, one has to divide one's attention between watching the letters that come up, looking for a new word; checking one's existing words, to see whether one can rearrange them and add a letter before someone else does; and watching everyone else's words, to see whether one can steal them! The language tends to deteriorate as the game progresses, and the level in the wine bottle(s) diminishes. It's great fun!

The game ends when no more words can be formed or stolen. The winner is the one with the most points, calculated for each word by multiplying the total points of the letters by the number of letters. For example, if a word has four letters, with points of 1, 1, 2 and 2, they would total 6. Multiplied by four letters in the word, that gives a word score of 24 points. Add up the scores for all your words to determine your total score.

Some people like to play for one cent per point. Each player pays the overall winner the number of cents (points) difference between their score and the winning score. However, I prefer to play for fun, not for money. Another variation is to include penalties for grabbing a word that proves to be invalid - i.e. you haven't changed the order or position of the letters in the original word(s). One penalty is to make the erring player give some or all of his or her own words to the player(s) from whom they mistakenly grabbed a word or words. Some make the transgressor return the word(s) to their owner(s), then drink a shot of something highly alcoholic. I don't recommend making many mistakes under those circumstances - particularly because after drinking a couple of penalty shots, you're likely to make a whole lot more mistakes!

If you're one of the few who haven't tried Scrabble, give it a go. It's a pleasant way to pass the time. If you've tried Scrabble, but not Anagrab, try that too. It's addictive!

Regarding the skydiving Scrabble game: Is "splat" a legal word?