Do you shout 'Fore!' while using it?


I'm giggling at a new invention that should appeal to golfers.

Ever had to go while playing golf? Can't hold it for all 18 holes?

A New York-born urologist came up with a solution to golfers' bothered bladders - a faux club that fits in a golf bag, but is really a mobile urinal.

"I wanted people to feel a level of comfort," said Dr. Floyd Seskin, inventor of the UroClub. "Worry where the pin is, not where's the next bathroom."

His inspiration came after a patient who underwent a prostate procedure came back months later to rave about his improved condition.

"I used to hit my ball directly into the woods so I can urinate," the man told Seskin. "You took five strokes off my game."

Seskin, 49, who lives in Miami Beach, set out to find a device that can help other golf enthusiasts, many of whom are over 50 and suffer from prostate problems.

He came up with a contraption that looks like a 7-iron with a wider opening on top, a handle that can hold about half a liter of liquid and - most importantly - a tight-fitting seal.

It comes with a golf towel that attaches to the belt and the club to allow a private, hands-free relief. 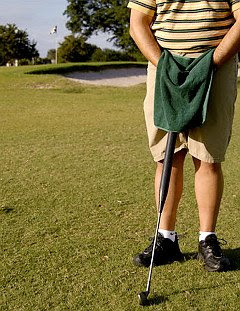 "You can do it anywhere," Seskin insisted. "It looks like you're practicing your swing or something."

He said many golf courses, especially ones near homes, fine players for passing water outdoors and that a lot of golfers don't hydrate enough to avoid the urge.

Though initial reactions to the UroClub often include quizzical stares, the response has been positive, Seskin said. About 1,000 have been sold in the few months since the product went on the market.

"It makes a great gift item for any golfer," said Seskin, who grew up in Syosset, L.I., and went to medical school in Brooklyn and Albany.

The UroClub is not available in stores, but can be bought through uroclub.com or by calling 866-999-4URO. It retails for $24.95 plus shipping.

Now what about a similar gizmo for lady golfers?

"Women's experience is completely different," Seskin said with a laugh. "You'd need an entire tent to pop out up of the bag."

In deference to my lady readers, I'm not going to go there! However, one question comes to mind for gentlemen golfers. If you're fiddling with your 'equipment' behind a towel on the golf course, could that be described as 'Fore!'-play?

i think your last question, Peter, is of the eeewwww type :)