They must be tired of life!


I'm amazed at a report from England of dare-devil kayakers plummeting down a dam spillway in Wales.

There is no coastguard on this enchanting shoreline. There is no mobile telephone signal and no emergency telephone box either.

What would be the point? There are no other human beings for miles.

Even if there were, and even if they all happened to be carrying lifebelts, it would not make the slightest difference if you happened to fall into the water just here.

Because the only equipment which might be remotely useful to a swimmer would be a crash helmet and some body armour. Or a hearse.

I am standing at the edge of the Llyn Brianne reservoir in Mid Wales, 13 billion gallons of water wedged into the sheep-specked Cambrian mountains by Britain's tallest dam, a mass of rock and clay 300ft high.

It also has Europe's largest overflow pipe, a concrete monster the size of a main road which plunges more than 1,000ft to the valley below. 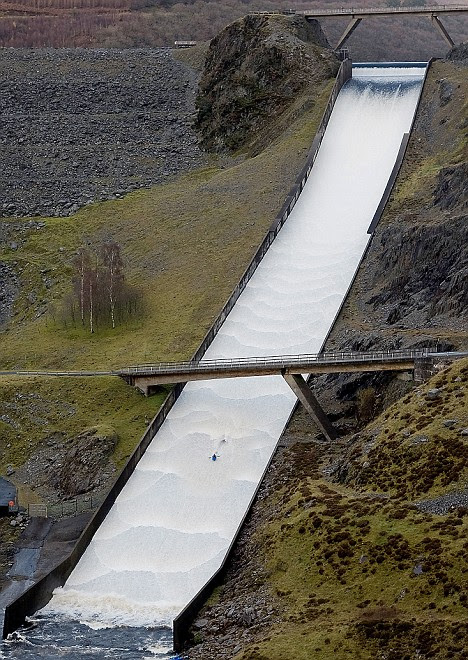 It makes one of those terrifying Olympic ski jumps look like a speed bump.

Standing on the public walkway at the top, looking down, is mesmerising and slightly nauseating.

The water goes from looking-glass calm, over a lip, on to a shelf and then crashes down the slope, forming a beautiful foaming latticework all the way down.

Dark at the top, it soon turns white with fury. It looks like a long-haired platinum blonde who hasn't done her roots properly. Engineers call a structure like this a 'spillway'. The rest of us would call it a giant drainpipe. 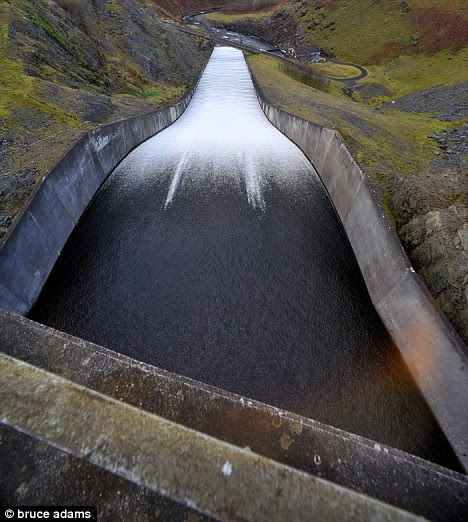 Down at the bottom, the froth crashes into a pool 12ft deep with a thick steel wall at the far end to break the force of the flow and to stop it eroding the foot of the dam.

The water rolls over and over on itself.

'It's like being caught in a washing machine,' says one who has survived this particular dip.

'Once you're under, it keeps you under.'

Eventually, the water runs out of energy, slops over the steel ledge and flows on down the valley to fill the baths and kettles of Swansea, Neath and Cardiff.

Understandably, its owners, Welsh Water, are very proud of this monumental piece of engineering.

But, this week, their pride has turned to anger. Because a handful of nutters - very skilful nutters, it must be said - have been plunging down their overflow pipe in little plastic kayaks.

We see these tiny figures, one after the other, skimming the surface of the spillway at 45mph with no brakes and no steering beyond a pair of plastic paddles. It's like watching a gondolier tackling the M1. 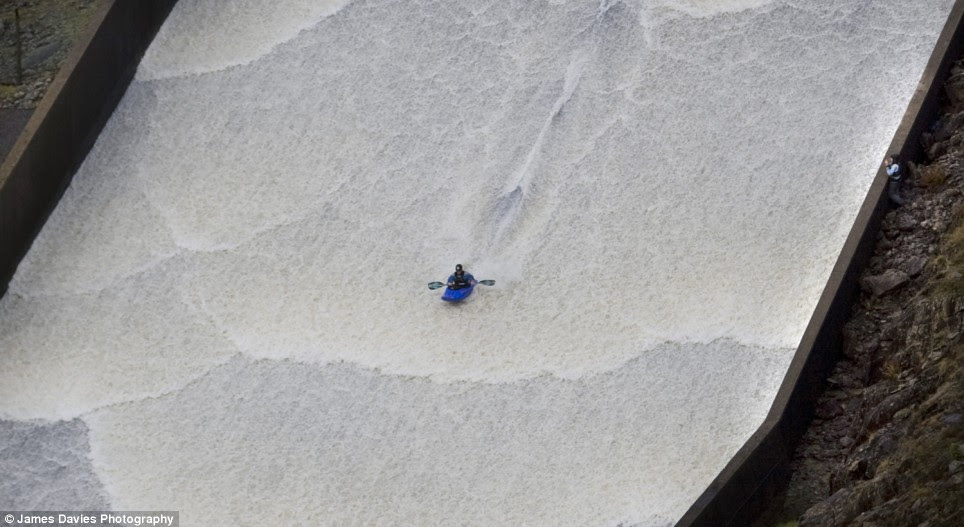 Each one appears to come to a juddering, splattering halt in the pool at the bottom without any apparent mishap.

They all seem pretty pleased with themselves, as well they might. The internet is busy - awash even - with their achievements.

Welsh Water, meanwhile, has issued a statement saying that anyone attempting this in future will be prosecuted for trespass.

Shaun [Baker] is the David Beckham of the kayaking world, a boating legend who, at a youthful 44, is revered by his peers.

He is the holder of five world kayaking records and spent the night before at a Downing Street party for ambassadors of the Special Olympics, for those with learning disabilities.

He is closely involved with the Duke of Edinburgh's Award Scheme - the Duke is very interested in Shaun's latest invention, a record-breaking jet-powered kayak - and is a qualified instructor in several watersports.

But while Berkshire-based Shaun may be part of the paddling Establishment, he also has a guilty secret. Several years ago, he was one of the first people to go down Llyn Brianne in a kayak.

'I can't believe how stupid I was and I would urge anyone else not to go near it,' he says.

'If you don't hit the bottom dead straight and fly over the wall, you can either break your back on impact, break your neck on the steel sill or just drown.'

These are stern warnings from a man who has paddled off waterfalls all over the world and once took his kayak down a Saharan sand mountain during an expedition to Morocco.

Shaun heard about Llyn Brianne from a friend of a friend and decided to tackle it - 'because it was there' - in a flat-bottomed plastic kayak. This enabled him to plane over the water but gave him almost no control.

'The boat just went ballistic. I spun 360 degrees clinging on to my paddles for dear life. I must have worn three inches off the blades and if I'd lost them, I'd have worn my fingers down to the first joint just trying to steer.

'If you don't steer and you hit that sill, you'll just shear your head off. I managed to get it right just as I hit the bottom.'

Having survived the drop, he then skimmed over the lip of the steel wall 'like a pebble' and then decided to paddle back into the tank to see what it was like at the foot of the sluice.

'Suddenly, I was being forced under and thrown around like a pair of socks in a washing machine. I must have been stuck under for about 40 seconds before I surfaced on the edge. The whole episode was just very scary. I just look back on it and think: "I shouldn't have got out of that." '

I was impressed just reading the article: but then I went to YouTube to look for video of people tackling this monster. There are several posted there, but only one seemed to me to capture the sheer suicidal madness of this beast. It's posted below.

LANGUAGE WARNING: Whoever posted this chose background music with at least one serious profanity, which I simply don't understand. I mean, why post something for general viewing with language that's hardly suitable? Anyway, if profanity offends you, watch it with your speakers switched off.

What else is there to do when your society is obsessed with rules and safety? (Nah, couldn't happen here...)