So that's what it was!


A few months ago I was sent a link to a video by e-mail. It showed a strange-looking creature, with long, string-like tentacles, deep beneath the surface of the Gulf of Mexico. The video was taken by a remotely-operated vehicle of the Shell oil company, while prospecting for oil. It's apparently been circulating on the Internet for a year or more.

Now comes the explanation of what it was. According to National Geographic:

A mile and a half (two and a half kilometers) underwater, a remote control submersible's camera has captured an eerie surprise: an alien-like, long-armed, and—strangest of all—"elbowed" Magnapinna squid. (See photos of Magnapinna.)

In a brief video from the dive recently obtained by National Geographic News, one of the rarely seen squid loiters above the seafloor in the Gulf of Mexico on November 11, 2007. 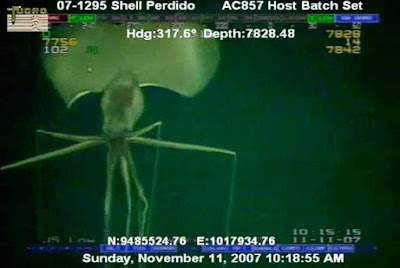 The clip—from a Shell oil company ROV (remotely operated vehicle)—arrived after a long, circuitous trip through oil-industry in-boxes and other email accounts.

"Perdido ROV Visitor, What Is It?" the email's subject line read — Perdido being the name of a Shell-owned drilling site. Located about 200 miles (320 kilometers) off Houston, Texas, Perdido is one of the world's deepest oil and gas developments.

Despite the squid's apparent unflappability on camera, Magnapinna, or "big fin," squid remain largely a mystery to science.

ROVs have filmed Magnapinna squid a dozen or so times in the Gulf and the Pacific, Atlantic, and Indian Oceans. 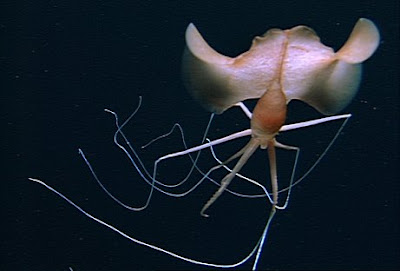 The recent video marks the first sighting of a Magnapinna at an oil development, though experts don't think the squid's presence there has any special scientific significance.

But the video is evidence of how, as oil- and gas-industry ROVs dive deeper and stay down longer, they are yielding valuable footage of deep-sea animals.

Some marine biologists have even formed formal partnerships with oil companies, allowing scientists to share camera time on the corporate ROVs—though critics worry about possible conflicts of interest.

The Perdido squid may look like a science fiction movie monster, but it's no special effect, according to squid biologist Michael Vecchione of the U.S. National Oceanic and Atmospheric Administration (NOAA), who is based at the National Museum of Natural History in Washington, D.C.

In 1998 Vecchoine and University of Hawaii biologist Richard Young became the first to document a Magnapinna, based on juveniles of the Magnapinna pacifica species. M. pacifica was so unusual that the scientists had to create a new classification category to accommodate it: the family Magnapinnidae, which currently boasts four species.

Based on analysis of videos not unlike the one captured at the Perdido site, scientists know that the adult Magnapinna observed to date range from 5 to 23 feet (1.5 to 7 meters) long, Vecchione said. By contrast, the largest known giant squid measured about 16 meters (52 feet) long.

And whereas giant squid and other cephalopods have eight short arms and two long tentacles, Magnapinna has ten indistinguishable appendages that all appear to be the same length.

"The most peculiar structure is that of the arms," said deep-sea biologist Bruce Robison of the Monterey Bay Aquarium Research Institute in California.

Referring to the way the tentacles hang down from elbow-like kinks, Robison said: "Judging from that structure, we think the animal feeds by dragging its arms and the ends of its tentacles along the seafloor as it drifts slowly above it." 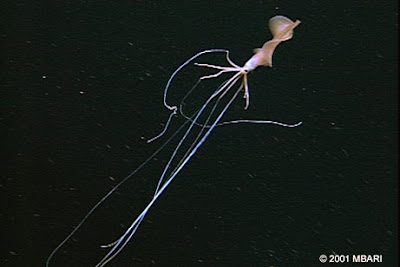 The elbow-like angles allow the tentacles to spread out, perhaps preventing them from getting tangled.

"Imagine spreading the fingers of a hand and dragging the fingertips along the top of a table to grab bits of food," he added.

But NOAA's Vecchione suggests a feeding behavior that is more like trapping than hunting. He speculates that Magnapinna passively waits for prey to bump into the sticky appendages.

Fascinating stuff! I'm glad to know more about that weird-looking creature. I wonder how many more species unknown to science are waiting down there?