A new airship takes to the skies


The US Air Force recently cancelled its proposed Blue Devil II persistent surveillance airship project, but the US Army is pressing ahead with its plans for a similar vehicle.  The prototype of the Long Endurance Multi-Intelligence Vehicle, or LEMV, flew for the first time on August 7th.  Ares reports: 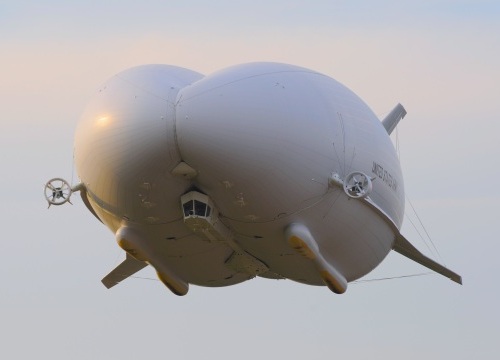 When Northrop signed the $154 million contract for the LEMV in June 2010, first flight was scheduled for 12-13 months into the 18-month development program. The airship is planned to deploy to Afghanistan after the completion of testing, which would now put it into early 2013.

The airship is designed to operate unmanned at 20,000 ft. for 21 days; providing up to 16kW of electrical power for a 2,500 lb. payload of several different sensors. Hybrid Air Vehicles of the UK is the subcontractor responsible for the airship itself.

The LEMV is optionally manned and flew with a crew for this first flight. "Additional manned flights will resume following a planned and very detailed inspection of the vehicle," says the Army.


There's more at the link.  Here's a video clip of the LEMV's first flight.

It's good to see an airship in the air again, particularly one combining the lifting effects of gas with an aerodynamically-shaped 'body' providing lift as well.  It'll be very interesting to see whether the Army's plans for this vehicle come to fruition.

What was old is new again.

For Afghanistan, eh? Sure. Or maybe here, in the skies of our growing surveillance state. I can't say I'm thrilled.

+1 on MSgt's comment! 'Somebody' in the crowd was happy too! LOL

Yes! One step closer to fulfilling my life's ambition--to be the Weapons System Officer on an attack Zeppelin!!

um, that cleft in the structure? "To the ButtCave, Robin!" "Let's take the ButtMobile!"

My take on blimps is here:
http://didnitellyou.blogspot.com/2010/07/afk.html

Blimps and dirigibles are great in fine weather, but the reason large, fixed wing, aircraft transcended them is bad weather handling.

How will this large ungainly craft handle when there is a storm approaching, or when it must land on uneven terrain in a wind squall?

the fact they measure the flight duration in days (actually weeks), as apposed to an aircraft's hours, is what makes it practical. High altitude capability helps, also.

Apparently helium filled airships are also tough as nails. Apparently in some experiments (can't be bothered finding link right now-on mobile), after being targeted with modern weaponry they took ages to come down as they slowly leaked gas (the gas is stored inside at near ambient pressure, meaning that they lose gas incredibly slowly).

Hold onto your hats gents. With Zepplin back in the airship business I anticipate more commercial applications as well.