I guess today's award should go jointly to the Trojan condom company and the administration of New York City.  The New York Post reports:

They must have rubbed Mayor Bloomberg the wrong way. 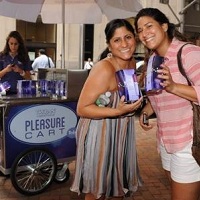 Trojan sent tingles of excitement across the city when it announced the giveaway of some 10,000 vibrating sex toys from hot-dog-style pushcarts.

But instead of climaxing in a successful giveaway, the promotion was prematurely interrupted by City Hall, which sent a dark-suited representative to put the squeeze on Trojan’s “Pleasure Carts.”

The spoilsport, who declined to identify himself, told Trojan’s reps at the Flatiron location that they had to shut down because of the size of the crowd that had gathered.


There's more at the link, including a video report and a picture gallery.

Silly of them, really.  The only vibrators one's likely to find on most city streets are these - and they mostly have union operators attached to them!

Maybe Bloomie would be happier in Munich. He could strut around in his brown shirt and boots and feel like a player. He could hang out and drink some beer with George Soros and the Pope. I'll bet they could teach him the words to the "Horst Wessel!"

I've typed it before and I'll type it again:

There is absolutely NO ONE left in New York City with any balls or backbone whatsoever.
Did the fracking government put something in the water supply that turns normal, intelligent people into 2 legged sheep?
That's the only theory I can come up with to explain why this would-be Nazi weasel is not suspended by a rope from a street light.