The only reason Steve Marks isn't one of our Doofi of the Day is that his marriage proposal succeeded in attracting the desired response.  However, on the way there . . .

Mr Marks first arranged for friend Stuart Dawes to leave a hamper, picnic blanket and champagne at The Temple in Stancombe, Gloucestershire – said to be one of the most romantic places in Britain. 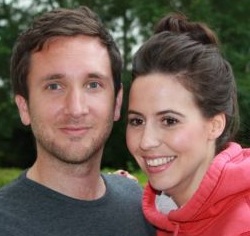 But things went wrong from the outset when, instead of delivering the couple to a country idyll, their satnav sent them to a retail park in the centre of Swindon, Wiltshire. Lovely. To make matters worse, the couple then got held up in heavy motorway traffic, leaving 34-year-old Mr Marks to contemplate popping the question in the middle of a jam.

Just when he thought nothing else could go wrong, co-conspirator Mr Dawes called to say their intended destination was off the agenda anyway – it was privately owned... and not available for the proposal.

Under a bit of pressure now, Mr Dawes had to come up with another scenic spot – Tyndale Monument in North Nibley, Gloucestershire.

Mr Marks ... said: ‘I stopped at a corner shop and talked to Stuart on the phone. He sounded massively out of breath because he had run up the hill to check it was suitable... without the picnic basket, the champagne and flowers. Then he had to go back up with everything. But it had the most amazing views.’

Then came a final blow. The hill was muddy and Miss O’Neill, who had endured an increasingly uncomfortable and, frankly, bemusing journey, wasn’t keen on climbing to the top.

Mr Marks, of Hoddesdon, Hertfordshire, said: ‘Nuala had new shoes and said she wasn’t going to walk up the hill.’ A little smooth talking later, they were at the top. Mr Marks added: ‘She turned round and I was on my knee.’

Miss O’Neill, 26, accepted – and the couple were applauded by a group of ramblers who had also made the climb.

They are now planning to get married in Ireland next year... and Mr Marks may take a taxi to that.


There are more photographs at the link.

I'll keep an eye out for reports of a wedding gone awry next year.  At this rate, Mr. Marks and his fiancée may make our Doofi of the Day category after all!