Here's one for aircraft lovers


We've frequently referred to Vintage Wings of Canada on this blog.  Their latest newsletter, titled 'Going Home', has the story and a number of photographs about four aircraft, old and new, that came together at a Cadet training camp in Alberta.  The aircraft were a P-51D Mustang of World War II vintage;  a 1950's Canadair Sabre Mk. 6, probably the ultimate development of the Sabre fighter series of Korean War fame;  a Canadair CT-114 Tutor jet training aircraft of the 1960's;  and a modern CF-18 Hornet, a Canadian-specific variant of the US Navy's F/A-18 Hornet, currently the front-line fighter of the Royal Canadian Air Force.  Here's a photograph of the four aircraft in formation. 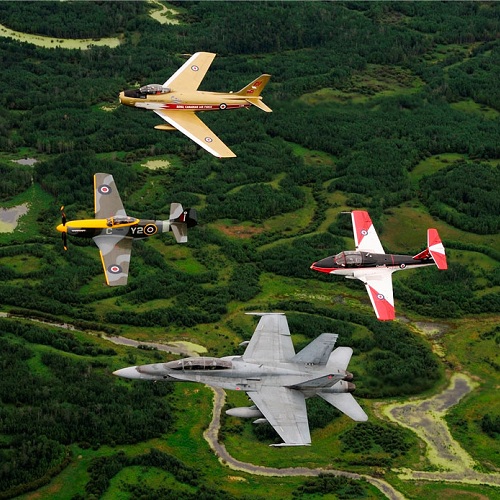 There are many more (and larger) photographs at the link, as well as the story of their reunion.  Heart-warming stuff for aviation buffs.

That's a great picture. Three of my favorite aircraft in one shot.

Great story, and the Canucks ARE doing it right!