Der Spiegel has an interesting report about the controlled detonation in Munich of a US-dropped bomb dating back to World War II.

Unable to defuse a 250 kilogram (550 pound) bomb found buried one meter (three feet) deep at the site of the former bar Schwabinger 7 in the heart of the Bavarian capital, authorities elected to detonate the explosive on site. 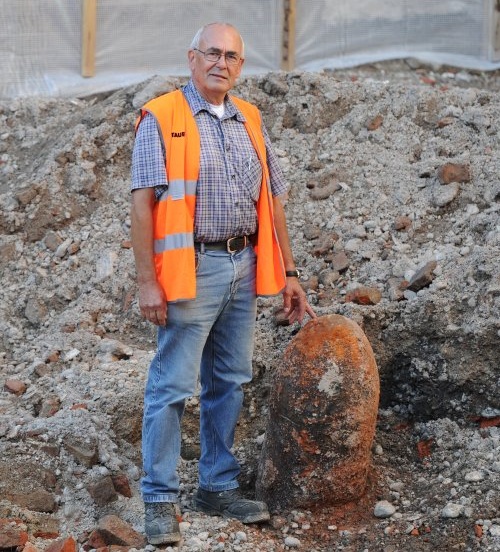 The controlled blast, finally carried out just before 10 p.m., sent a fireball into the night sky, shattered windows in the vicinity and resulted in several small fires on surrounding rooftops. Nobody was hurt.

"Almost all the window panes in the immediate area were destroyed," Diethard Posorski, from the Munich bomb disposal authority, told journalists. A fire department spokesman added: "It looked quite spectacular." 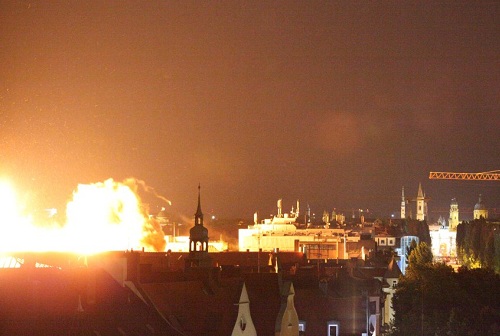 The bomb, a model used by the US air force in World War II, was found on Monday during construction work. Initial attempts to defuse the explosive, however, failed due to the complicated nature of the chemical delay-action detonator. Such detonators were used on just 10 percent of the bombs dropped on Germany during World War II but they often failed; they make up a disproportionate share of the unexploded ordnance discovered in Germany. Once authorities opted for a controlled blast, thousands of sandbags were brought in to protect surrounding buildings.

By Wednesday morning, normality had returned to much of the area surrounding the site of the explosion and many streets had been reopened. But several hundred residents were still waiting to be allowed to return home.

The find is almost certain not to be the last. Tens of thousands of unexploded bombs are thought to still lie undiscovered in German cities, leftover from the Allied bombing raids that demolished the country's metropolitan areas in World War II. Officials in Munich estimate that there are some 2,500 bombs buried in the Bavarian capital alone. There have been four significant discoveries of unexploded ordnance in the city this year. Just one week ago, officials in Nuremberg succeeded in defusing a similar 250-kilogram bomb.

Experts say that the undiscovered bombs in Germany become more dangerous with each passing year. Last year, a former bomb disposal chief told SPIEGEL ONLINE that "unexploded bombs are becoming more dangerous by the day through material fatigue as a result of ageing and through erosion of safety elements in the trigger mechanisms."


There's more at the link, plus a gallery of pictures of the bomb and the damage caused by the explosion.  It sounds like this was an M43 500lb. general-purpose bomb, standard USAAF equipment during World War II.  (Details of US aerial bombs used during that conflict, including some photographs, may be found here.)

Munich wasn't alone in having problems with unexploded World War II ordnance this week:  parts of Schipol Airport in Amsterdam was shut down on Wednesday when another such bomb was discovered there.  I wouldn't like to be one of the EOD techs working on those bombs . . . ancient, corroded fuses, many made with the unstable explosives of an earlier era, aren't what I'd like to have anywhere near my working environment, thank you very much!  I've had a couple of all-too-close encounters with sweating cordite in ammunition manufactured during World War I for British 9.2" cannon, which were later used for coastal defense in South Africa (12 of the surviving 27 guns of this type are to be found in that country).  That was quite enough for one lifetime!

15 years ago an colleague (from Colorado) and I were walking around Frankfurt Am Main to get rid of the jet lag before the next day's meetings.

Frankfurt, as you know, was flattened in the war. While we were walking around we passed an old, half-timbered traditional German house between two high rise buildings.

My colleague looked at me and said, "Damn. How'd we miss that one?"

OBTW, he was a rodeo champion, and so he was clearly an Enemy of all that was Good and True.

I've done a number of foolhardy things in my lifetime, including years in the Navy ... but EOD is well outside my comfort zone.

It's not just WWII bombs that you have to worry about in Europe. In France and Belgium, farmers are still plowing up unexploded ordinance from WWI. Every spring, farmers plow up a good number shells and place them in piles on the side of the road where they are collected by Army EOD teams. These almost 100 year old artifacts are still deadly, every now and then, a E.O.D. officer is killed or wounded dealing with them. Oh yeah, one more thing, there is a good percentage of these shells that contain poison gases such as chlorine, phosgene, and Mustard Gas.