From public convenience to private home


I was intrigued to see the transformation, in England, of an old, derelict, semi-underground public toilet into a private home.  The Telegraph reports:

When the architect Laura Clark told friends and family that she was planning to live in an underground former public lavatory in south-east London, responses ranged from hilarity to horror along with quite a few polite inquiries as to the state of her mental health. ‘I was known as Laura Toilets for a while,’ she says laughing. And there were moments during the project’s lengthy gestation when Clark questioned her own sanity.

In the middle of 2011 Clark found herself the proud owner of the underground public conveniences, built in 1929, last used some time in the 1980s and now filled thigh-high with rubbish. 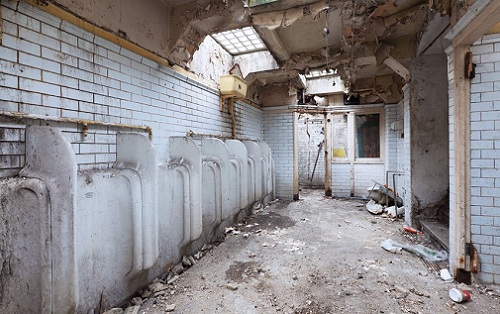 She lost no time in getting stuck in, working alongside builders and labourers in order to transform the dank and frankly creepy space into a bright and airy home. ‘I ended up doing a lot of the labouring work myself, because it was such horrid, hard work that I struggled to keep people on the job,’ she says. ‘And filling skips is character-building.’ For Clark, who fights mixed martial arts at semi-professional level, it was also good strength training. She even persuaded one of her sparring partners to help out with a sledge-hammer on the grounds that it would be good for their game. Remarkably, the entire project cost only £65,000 [about US $102,500]. ‘But in fairness, I did have many years to work it all out,’ she says.

Today it is hard to imagine that the light-filled one-bedroom flat, with its streamlined shelves, glamorous gold-leaf bathroom and subterranean garden, was once a derelict public convenience. 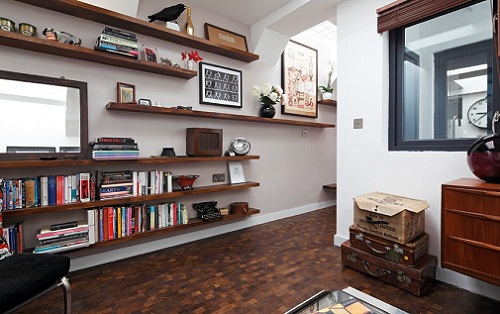 There are clues though. The tiles that form the splashback in the kitchen were reclaimed from the site’s original use, as was a mirror in the living-room. And propped on a kitchen shelf is a small public health poster warning of the perils of VD. But still, for Clark, this is home.


There's more at the link, as well as a gallery of photographs of the conversion process and the transformed home.

Isn't it amazing what a little imagination, a sense of design, and an artistic mind can accomplish?  I'd never have thought of converting a semi-underground public convenience into a private home!

What are we running ads for house builders now?

"Isn't it amazing what a little imagination, a sense of design, and an artistic mind can accomplish?"

Do not forget "copious quantities of money" as well... ;)

@Linoge: Actually, for a London one-bedroom apartment, that's a pretty low price, all things considered. Most would start at double that amount.

I was more referring to the total cost, accoutrements and all, since it would just be an intriguing negative space without those. Judging from the sites mentioned for her accessories, the owner is not hurting. Plus her own time, which does have a monetary value, even though she extracted enjoyment out of the process.